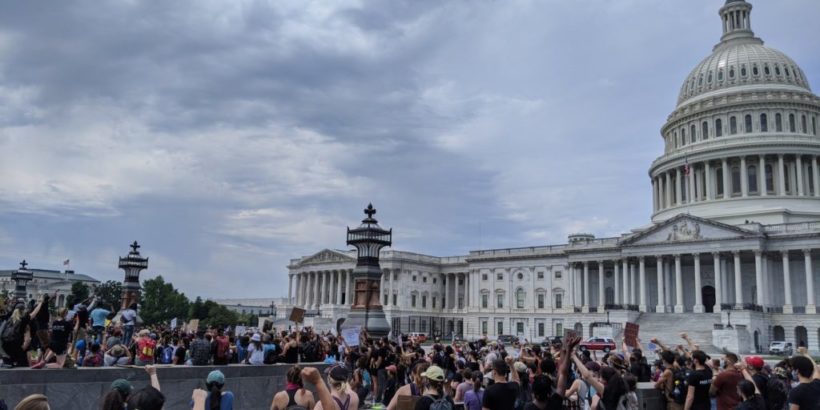 We’re in! Keep it moving, baby!’ Delegate Derrick Evans can be heard saying in a video

“To the contrary,” Bryan said, “he was exercising his constitutionally protected rights to engage in peaceful protest, and to ﬁlm the events which were unfolding. I will help him in enforcing those rights against any commentators or public ofﬁcials who seek to retaliate against his political expression, or who further disparage his name by alleging that he was part of that separate group who engaged in despicable acts of violence and destruction of property that day.”

A cell phone recording of a portion of the now-deleted video shows Evans dressed in a helmet in the midst of a screaming mob that forced its way into the Capitol.

“We’re in! Keep it moving, baby!” Evans can be heard saying on the tape.

Evans lingered in the Capitol Rotunda — which is lined with paintings and artifacts and has historically been used as a ceremonious resting site for prominent deceased leaders of the U.S. — and yelled to the others, “No vandalizing!”

The incident, which delayed a joint session of Congress to certify the Electoral College votes of the presidential election, forced lawmakers to flee the Senate floor and take cover, caused a barrage of destruction to the building, and left at least four people dead and dozens of others — including law enforcement officials — injured.

The speaker of West Virginia’s House of Delegates, Republican Roger Hanshaw, said Evans “should be prosecuted to the fullest extent of the law.”

A House spokesman, Jared Hunt, told The Associated Press that Hanshaw was still “gathering as much information possible about what has happened, and will evaluate all the potential consequences once the totality of the situation is understood.”

Evans, who represents a portion of Wayne County, said in a statement on Facebook after the incident that he was heading back to West Virginia and “was simply there as an independent member of the media to film history.”

West Virginia Democrats have called for Evans’ departure and prosecution, saying he must be “held accountable” for his role in the Capitol attack, WVNS reported.

Fox News’ David Aaro and The Associated Press contributed to this report.