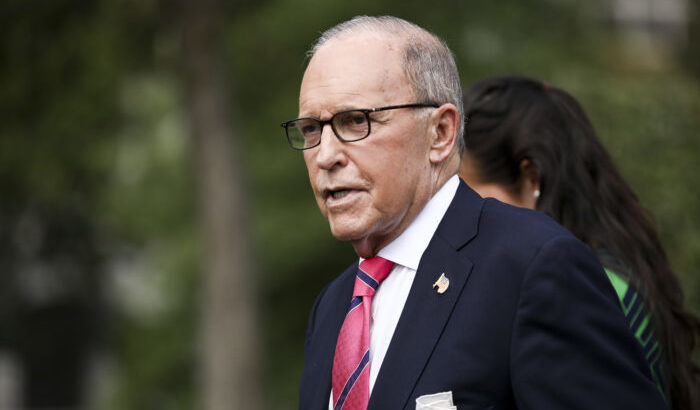 President Donald Trump’s top economic adviser Larry Kudlow said the administration is aiming to re-open the U.S. economy in the next four to eight weeks as tens of millions of people have been told to stay at home to fight the spread of the CCP virus.

President Donald Trump’s administration hopes that “in the next four to eight weeks, we will be able to open the economy,” Kudlow told Politico in an interview on Tuesday, as Treasury Secretary Steven Mnuchin issued similar statements to Fox News about the administration’s desire to re-start the economy.

CCP VIRUS SPECIAL COVERAGE
Amid the pandemic, restaurants, hotels, bars, salons, entertainment venues, and a number of businesses deemed nonessential have been told to shut down. More than 40 states have implemented stay-at-home orders, affecting nearly all aspects of daily life.

More than 10 million Americans have claimed unemployment benefits after being laid off in the wake of the shutdown, and some experts have made even direr predictions of U.S. unemployment rates surpassing 20 percent in the coming months as more businesses go under. As a result, Congress passed a $2.2 trillion stimulus package that will send out $1,200 payments to many taxpayers and $500 to children if they qualify.

Kudlow also told Fox on Monday that a contingency plan has been hatched by the White House to help the economy as the outbreak subsides after indications that New York, which has been the pandemic epicenter, has shown signs that the hospitalization has slowed down.

“The president would like to reopen the economy as soon as he can and we are planning internally,” Kudlow said on the network, adding that the spread of the Chinese Communist Party (CCP) virus is what will determine when the economy is reopened. “I am hoping … we’re only a few weeks away from a reopening. We’ll see,” he said.

There were 11,000 deaths and more than 360,000 confirmed cases of the CCP virus, a coronavirus that causes COVID-19, in the United States as of Tuesday morning, according to Johns Hopkins University. On Monday, New York Gov. Andrew Cuomo stated that the number of hospitalizations and intensive care admissions appeared to be leveling off in New York, drawing words of optimism from top White House officials.

“Everybody who knows me knows that I am very conservative about making projections, but those are the kind of good signs that you look for,” White House task force member Dr. Anthony Fauci said during a televised Monday briefing.  “That’s the first thing you see when you start to see the turnaround,” he said.

Another Chinese Doctor, Supervisor of Wuhan Whistleblower, Dies From Coronavirus