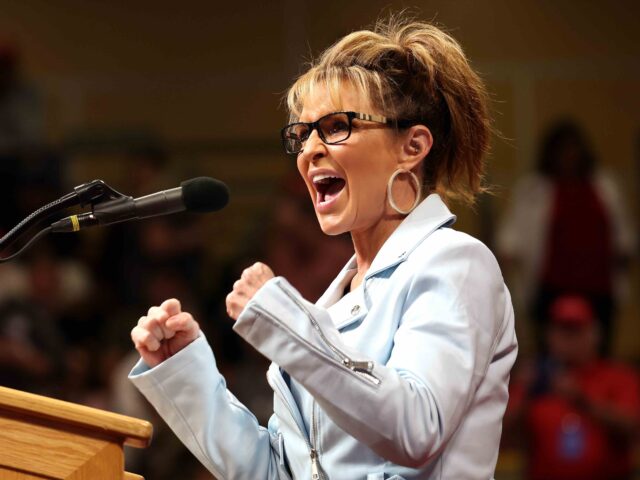 Well, the left has got one. On Twitter and beyond, you’ve never heard such crowing:

Democrat Mary Peltola has defeated Republican Sarah Palin in the special election for Alaska’s vacant House seat, a big upset over the former governor in the state’s first election under ranked-choice voting.

Peltola, a former state legislator who will become Alaska’s first indigenous member of Congress, defeated a special election field that included Palin and another Republican, Nick Begich III. The Democrat finished first in the initial tally and then won enough second-choice votes from Begich’s supporters to see off Palin, who had former President Donald Trump’s endorsement and previously won a statewide campaign in 2006.

That 60% of the state could vote for a Republican, yet the seat should nevertheless go to a Democrat, is bitter news indeed for the Republicans. Ranked-choice voting, which in Alaska was introduced in this election, where the voters whose candidate is eliminated get to vote a second time, through their second choices, pretty well left enough holes for the Democrats to walk away with the seat.

There’s a lot to be said about the ‘fairness’ of this sort of rigging, which is also how San Francisco ended up with now-recalled Chesa Boudin as district attorney. If one subset of voters gets two votes, why don’t all of them?

It’s doubly sad because Sarah Palin had been the frontrunner and was attempting to make a political comeback. Palin had been unjustly hounded from office as governor in 2009, following her stint as John McCain’s running mate in 2008, attracting grotesque amounts of demonizing attention from the left, as well as from sleazy McCain staffers leaking from inside the campaign. Her detractors painted Palin as a hick, and spread lies about her as corrupt, ignorant, and phony. It was a demonization that could only be compared to what they later did to Donald Trump, which is to say, Palin was the proto-Trump. Had she won, it would have been poetic justice.

Instead, we got this:

It would have been very satisfying to have seen Palin victorious in this election just for that. But in the end, she lost in what was effectively a three-way race, with the Republican vote split even as the Democrat vote was not. Had it been a party-on-party contest, it likely would have come out another way, or if not, would have been visible in the pre-election polls. Instead, it was an ugly surprise.

For this to occur in a red-wave year was downright unsettling.

But perhaps it shouldn’t be. Here’s where the left starts to get ahead of themselves:

Really, a blue wave? Every last election, no matter what the color of the wave, has a few outliers. When Scott Brown won his Senate seat in Massachusetts in 2010, taking the late Ted Kennedy’s seat, there was lots of talk about a red wave then, and broadly speaking, there was one nationwide. But Brown ended up getting booted from that Massachusetts seat by 2013 in favor of Elizabeth Warren. Brown may have looked like a bellwether, but in Massachusetts he was an outlier.

And it may well be the case for Peltola.

If the GOP can take this defeat as a wake-up call, they’ll learn the value of not allowing the GOP vote to be split despite taking 60% of the vote. They’ll prepare ahead of time and not allow two candidates to run for the same seat against one Democrat.

What’s more, that might happen sooner rather than later.

Palin gets another swing at Peltola and her leftist agenda in November, and if the greenie-agenda pain is strong enough, and the Bidenflation high enough, there should be flip-back, same as happened in Massachusetts. Alaska is a pretty libertarian state in orientation and there are a lot of libertarians who are liberal on abortion, which is what was said to have driven the Democrats. But inflation in general tops that as an issue for voters according to most polls, particularly with the Democrats’ extended incompetence on the matter.

Second, this strange rigged election is hardly about to be repeated in the rest of the country, since only a few places now have ranked-choice voting. It’s likely Democrats are going to go big on this form of rigging, given the successes they’ve had with it, but their wish list for it not going to be in place by November 2022. That means the red-wave trend is very likely still in place.

One hopes that Palin will eventually have her victory and the left can be heard screaming about it. For now, the GOP must recognize and acknowledge the dangers of the harebrained ranked-voting scheme and work to keep it from corrupting our entire system.

Let the left have its fun now. They’ve got a few months. Palin and the rest of the GOP, it is hoped, will double down on winning the red wave harder now, which is theirs to catch.

They may not be cheering in November.