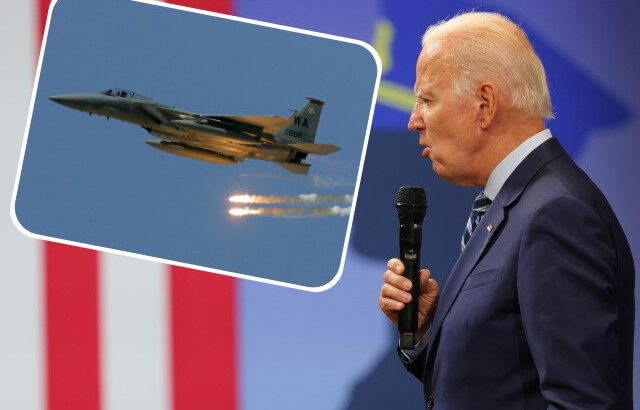 President Joe Biden again threatened his political enemies via the mention of F-15 jets, this time during his Tuesday speech in Wilkes-Barre, Pennsylvania.

Breitbart News reported on how Biden mocked Americans who believe owning AR-15s and similar rifles provides them a way to defend their liberty.

He said, “For those brave right-wing Americans who say it’s all about keeping America independent and safe, if you want to fight against the country you need an F-15, you need something a little more than a gun.

This is not the first time Biden has seemed to talk of pitting F-15s against his political enemies. He did it in February 2020, while on the campaign trail, and he did it again in June 2021, just months after taking office.

On February 10, 2020, Breitbart News noted Biden letting gun owners know that their AR-15s and AK-47s are no match for the government’s F-15s.

He said, “Those who say ‘the tree of liberty is watered with the blood of patriots’ — a great line, well, guess what: The fact is, if you’re going to take on the government, you need an F-15 with Hellfire Missiles. There is no way an AK-47 is going to take care of you if you’re worried about the government knocking down your door.”

On June 24, 2021, Breitbart News observed Biden stepping up the language a bit, adding nuclear weapons to the threat posed by F-15s.

Those who say the blood of liberty, the, uh, blood of patriots, you know, and all this stuff about how we’re going to have to move against the government. Well, the tree of liberty is not watered with the blood of patriots. What’s happened is that there never been– if you wanna– think you need weapons to take on the government, you need F-15’s and maybe some nuclear weapons. The point is there’s always been the ability to limit– rationally limit the type of weapon that can be owned and who can own it.

F-15s, nuclear weapons, and Hellfire missiles are real weapons of war. An AR-15 is just a semiautomatic .22 caliber rifle.

AWR Hawkins is an award-winning Second Amendment columnist for Breitbart News and the writer/curator of Down Range with AWR Hawkins, a weekly newsletter focused on all things Second Amendment, also for Breitbart News. He is the political analyst for Armed American Radio and a Turning Point USA Ambassador. Follow him on Instagram: @awr_hawkins. Reach him at awrhawkins@breitbart.com. You can sign up to get Down Range at breitbart.com/downrange.