‘Tyranny’ Has Come To Our Cities; What Are We Going To Do About It? 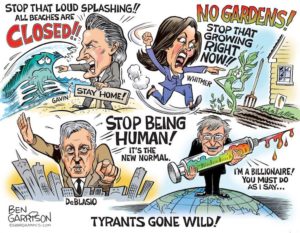 The DS was trying to remove our rights, to keep us from working, to vaccinate us, and wanted us to submit to a controlled society. This was their agenda.

Protests, marches, business owners pushing back; we are seeing tyranny for the first time. Our leaders are telling us we cannot live our lives, but have to live the way they want us to. We now know who the tyrants are. One district in CA is calling themselves a Sanctuary City so they can go back to work. They are using the DS’s own weapons against them.

The White Hats are dropping declassified documents slowly, so we can process what is going on. People are asking questions, which is good. This is the DS’s greatest fear… public awakening. 3-2-1 Boom!

Why is Facebook and YouTube banning certain articles? They think if they can censor, you won’t read the truth. But what they fail to realize is if someone really wants to know something, they find means to get information they seek. This is what we are seeing with the Anon movement a.k.a., ‘Truthers.’

Censorship is big right now. We learned that the social media platforms cannot read memes. Only the NSA can read memes. Facebook announced a hateful memes challenge with 100K Prize money for anyone creating an app that can recognize hate speech. Because of this, they purchased Giphy for $400 Million dollars. Why? To control which giph’s are used to promote the Anon movement.

What is the 302 in regard to Gen. Flynn’s case? It happens to be the document proving Flynn’s innocence.  It was drafted right after Flynn’s interview and is so important, the DS continues to hide it even though they were directed to release it. If Judge Sullivan let’s this case go, the 302 will be produced and everyone will know ‘Flynn did not lie, nobody thought he lied, and all this was fabricated’ to get rid of Flynn, … and eventually Trump.

HR 6666 is a law severely infringing on the privacy of every American citizen. It is for Testing, Reaching, And Contacting Everyone. (TRACE) Act. If this passes, tracking you will become law. For more information, you can google H.R. 6666.

The DS doesn’t want you going to the polls. With mail-in voting, a third party picks up ballots from the post office, and takes them to another facility for counting. Historically, many ballots never get counted. The bottom line is, it’s easy to cheat with mail-in ballots. Going to the polls creates a secure voting environment and the DS fears that.

The takedown of the DS is being led by acting DNI director, Ric Grenell. Trump handed everything to the ODNI who now will secure the voting methods for 2020.  Barr and Grenell have the ability to declass. The DS is panicked.

The Government draws its power from the governed.  Our founding fathers encouraged us though the US Constitution, to bear arms to fight off a tyrannical government. We have every right to protest and question the people we have placed in office. Domestic terrorism is what we see coming from our states’ capitols, not from our right to bear arms.

Remember Thomas Jefferson’s words: “Such laws make things worse for the assaulted and better for the assailants; they serve rather to encourage than to prevent homicides, for an unarmed man may be attacked with greater confidence than an armed man.”