Shapiro Saved The Day For Brennan, At Least For Now

John Brennan met with John Durham. Brennan is not shy when it comes to giving his opinion. Curiously, Brennan allowed Nick Shapiro to speak on his behalf.  Why?

Shapiro’s message to the world stated Brennan was not under a criminal investigation. Why didn’t Brennan just come out and say this himself?  Is it possible Brennan allowed Shapiro to speak on his behalf so he wasn’t caught in a perjury trap? Lying under oath is perjury but if Brennan had Shapiro speak to the media, Brennan isn’t caught in a lie.

Brennan can either make a plea deal or Durham will just continue on. This is why Brennan met with Durham. Durham already has the goods on Brennan and for Brennan to have Shapiro speak, tells us he is in a panic.

Post 2230
Joe diGenova:
“As I’ve been saying for two years, there’s been a brazen plot to illegally exonerate Hillary Clinton in the email case and then if she had lost, to frame Donald Trump. And that is exactly what these texts are about. Whether or not Mr. Strzok and Lisa Page and others are indicted is certainly a question people can debate, but let me just say I know there is a grand jury underway, testimony is being taken about Strzok, Page, McCabe and others involved in this case and the reason we know it is that James Baker, the former general counsel of the FBI, as turned State’s evidence is fully cooperating with the Inspector General and with the Federal Grand Jury. I can assure you, Mr. Comey has been very silent in recent weeks and the reason is very simple: he knows he’s going to be indicted.

Durhams case is very reliable. He’s getting his information from Baker, Clinesmith, Page, Strzok, and many others. Brennan all the way up to Comey are panicked.

We know the DS is not in control.  When someone commits a crime and does not want to get caught, he creates distractions, pointing fault away from himself.  The larger the crime, the bigger the distraction. The pandemic, riots, censorship against (cue), etc., all point to panic.

In the Virgin Islands, they are planning to subpoena billionaire investor Leon Black in the Epstein case. He has ties to Epstein with being Black’s advisor for his tax strategy, estate planning and many other things. They want to question him to find out what he knew. Epstein’s case continues.

Barr is in complete control. We know because there have been no leaks and the DS is panicking. They have tried everything to get rid of President Trump and nothing is working. All they have left is to create more chaos or try to cheat in the elections.

A while back, Dr. Fauci came out say he didn’t see why Americans shouldn’t go to the polls if they practice safe distancing. Now, Dr. Birx is saying the same thing. She said she went to Starbucks’s all over the country and if she can do that, we can go to the polls.  The DS/MSM is in trouble right now. 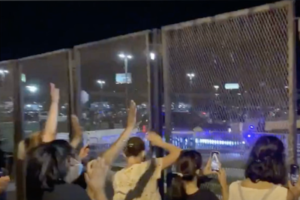 As the DNC set up outside the Chase Center, they built a wall to protect supporters as they organized their event. They also made mandatory, photo ID to access the event. Isn’t Trump doing this at the border?

In the same way, where are the clinical trials which support mask-wearing? In fact, the clinical trials point to the opposite. The virus is so tiny it can glide right through the fabric of the bandana, the cloth mask, T-shirt or whatever material you wear.

Did they test your handkerchief for efficacy? Shouldn’t the clinical trials prove masks work rather than that they don’t?  Where is the logic in this? They have not shown us any data proving they work because there isn’t any.

The Washington Post takes their orders from the CIA and the invisible enemy. A reporter suggests that Democrats want to repeal the 22nd Amendment which states a president can be in office for only 2 terms. Why would the Dems want to repeal this before this election? Are they hoping their person wins and gets to be in office for 3 terms?  We know they certainly are not doing this for Trump, but most likely he will benefit after he wins.

Recently, Trump’s Administration has deemed educators as critical essential workers. Now the kids can be educated again, the economy can re-open and we can go to the polls to vote.

Everything is falling apart for the DS. John Brennan is trapped, James Baker is cooperating with investigators, Leon Black is being subpoenaed, and Dr. Birx says we can vote at the polls.

The DNC built a wall, no clinical trials have been on social distancing, and President Trump says teachers are critical essential workers. All this totally messes ups the DS’s plan. The Patriots are in complete control!