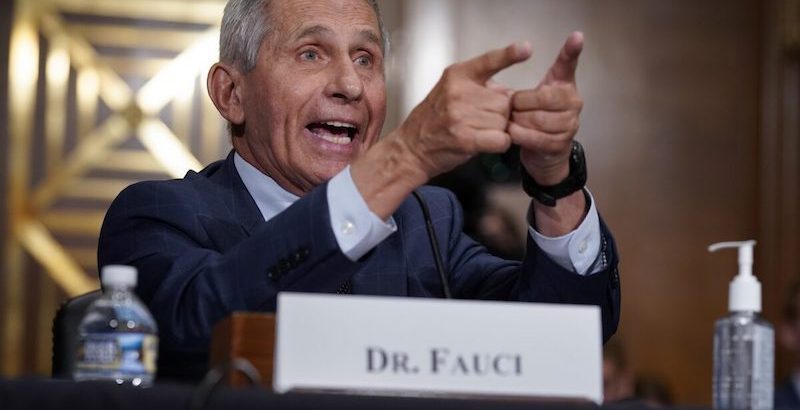 Sen. Paul Clashes Anew With Fauci Over NIH Funding to Wuhan Lab: ‘Gain of Function Research Was Going On’

Dr. Anthony Fauci and Sen. Rand Paul (R-Ky.), also a doctor, clashed anew during a congressional hearing on Tuesday, accusing each other of lying.

In what has become a regular occurrence on Capitol Hill, the pair faced off over whether the National Institutes of Health (NIH) provided money to researchers in Wuhan, China, to conduct gain of function research.

“Dr. Fauci, as you are aware, it is a crime to lie to Congress,” Paul told the longtime head of the National Institute of Allergy and Infectious Diseases, which is part of the NIH, during a Senate hearing in Washington.

The senator then entered into the record a 2017 article that listed a number of authors, including Peter Daszak, president of the nonprofit EcoHealth Alliance, and Dr. Shi Zhengli of the Wuhan lab. The article relayed how Chinese researchers had discovered “a rich gene pool of bat SARS-related coronaviruses” and that the pool had provided “new insights into the origin of SARS coronavirus.”

Paul noted that the paper’s authors listed funding from Fauci’s agency and the NIH as supporting their work, and that the work the scientists described amounted to gain of function.

“In this paper, she took two bat coronavirus genes, spike genes, and combined them with a SARS-related backbone to create new viruses that are not found in nature. These lab-created viruses were then to shown to replicate in humans,” he said of the experiments, adding that they intended “to create novel, artificial viruses able to infect human cells.”

The NIH paused funding for gain of function research of concern in 2014, a pause that lasted for five years, but the agency “failed to recognize” that the Wuhan work met the definition of gain of function, Paul added, citing Richard Ebright, a professor of chemistry and chemical biology at Rutgers University.

“Dr. Fauci, knowing that it is a crime to lie to Congress, do you wish to retract your statement?” Paul asked.

“Sen. Paul, I have never lied before the Congress and I do not retract that statement. This paper that you are referring to was judged by qualified staff up and down the chain as not being gain of function,” Fauci claimed.

Paul read the NIH’s definition of gain of function, and accused Fauci of “dancing around this because you’re trying to obscure responsibility for four million people dying around the world from a pandemic.”

“If the point that you are making is that the grant was funded as a sub-award from EcoHealth to Wuhan created SARS-CoV-2, that’s where you are getting,” Fauci said, visibly irate. “I totally resent the lie that you are now propagating senator. Because if you look at viruses that were used in the experiments that were given in the annual reports that were published in the literature, it is molecularly impossible.”

“No one’s saying those viruses caused the pandemic. What we’re alleging is that gain of function research was going on in that lab, and NIH funded it. You can’t get away from it, it meets your definition, and you are obfuscating the truth,” Paul said.

“You are implying that what we did was responsible for the deaths of individual[s]. I totally resent that and if anybody is lying here, senator, it is you,” Fauci responded, ending the exchange.

Fauci has been pressed previously on what some critics say are misleading or false statements offered before Congress.

Fauci in 2012 described the type of work later done at the Wuhan lab as gain of function research, or enhancement of a virus’s transmissibility, adaptability, or pathogenicity.

Grant documents show that the NIH gave more than $800,000 to the lab in Wuhan, which is situated just blocks from where COVID-19 first appeared in late 2019.

Internal emails made public in June showed the NIH sent $826,777 between fiscal years 2014 and 2019, though Fauci told members of Congress that the NIH sent just $600,000 during that timeframe.

NIAID told The Epoch Times in an email that the $826,777 was what was budgeted while just $600,000 was actually spent. There is no indication in the emails that any of the money was not spent.

“These new documents show that funding for the Wuhan Institute was greater than the public has been told,” Tom Fitton, president of the watchdog Judicial Watch, which obtained the emails, said in a statement. “That it has taken a year and a federal lawsuit to get this first disclosure on COVID and Wuhan is evidence of cover-up by Fauci’s agency.”

In another set of emails, obtained by Buzzfeed News, Hugh Auchincloss, a top Fauci aide, told the doctor last year that a paper he had sent over “says the experiments were performed before the gain of function pause but have since been reviewed and approved by NIH.”

“Not sure what that means since Emily is sure that no Coronavirus work has gone through the P3[CO] framework. She will try to determine if we have any distant ties to this work abroad,” Auchincloss said.

Auditors from the Department of Health and Human Services’ inspector general’s office announced in mid-June that they are investigating whether the NIH properly managed the grants that funded China’s controversial work.