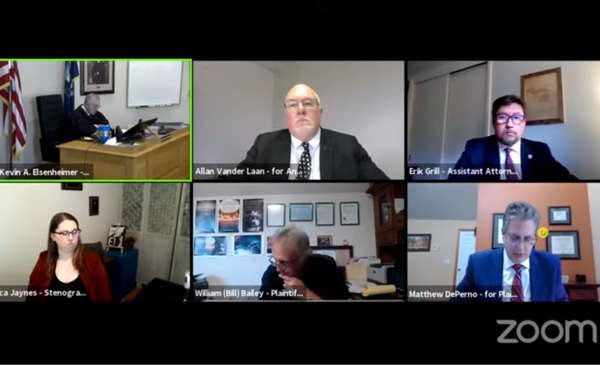 A Michigan judge on Tuesday threw out a case challenging the 2020 election in Antrim County.

13th Circuit Court Judge Kevin Elsenheimer, a Republican nominee, ruled that plaintiff William Bailey, a resident of Antrim County, had received the relief he sought after he filed the lawsuit last year following the election.

Bailey was seeking an independent audit of Antrim County’s election but Elsenheimer decided that the February risk-limiting audit conducted by county clerks, who reviewed a random sample of some 18,000 ballots, was sufficient under state law.

“There is no right either in the constitutional section or the statue for the independent audit that Mr. Bailey seeks,” Elsenheimer told the court.

“As the plaintiffs have either received all of the requested relief or are not entitled to the relief requested as a matter of law … the plaintiff’s claims are, in fact, moot,” he added.

Elsenheimer ruled in favor of a joint motion for summary disposition filed by Michigan Secretary of State Jocelyn Benson, a Democrat, and Antrim County.

The judge had earlier granted the other relief Bailey sought: a forensic audit of a tabulator in the county and a protective order preserving records.

The audit issue involves Michigan Proposal 3, approved by voters in 2018, which altered the state Constitution to allow Michigan voters “the right to have the results of statewide elections audited in such a manner as prescribed by law to ensure the accuracy and integrity of elections.” But state law, specifically MCL 168.31a, gives the secretary of state the authority to prescribe how audits are conducted.

Bailey’s lawyer, Matthew DePerno, told The Epoch Times that he plans on appealing the decision and filing a motion for reconsideration. He intends to file other lawsuits as well.

DePerno considers Elsenheimer “wrong on his interpretation of the Michigan Constitution and wrong on the idea that the secretary of state has her ability to invent her own procedures to ‘audit’ an election even if she’s part of the fraud.”

DePerno has accused Antrim County Clerk Sheryl Guy and Benson of lying to the public about what happened in the county on Election Night and in the following weeks.

“They knew what happened and they tried to cover it up,” he said.

The county initially reported that Democrat Joe Biden received over 3,000 more votes in the county than then-President Donald Trump. Democrats Gary Peters and Dana Ferguson were also shown ahead of their Republican opponents.

The county twice released an amended vote count—first on the day after the election, showing Trump received more votes, and again on Nov. 21, 2020, indicating a different number of votes for Biden, Trump, and overall. The total number of votes dropped by 2,013.

More recently, DePerno and Benson filed competing analyses of the election, with the plaintiff asserting his team found it possible to flip votes, and the intervening defendant alleging the election mistakes were the result of human error and not from “a security breach” or done deliberately.

Elsenheimer, the judge, stressed in the courtroom that his ruling was not about testing facts, but about testing the legal sufficiency of the claims brought by Bailey. He said the ruling did not mean that election machines were not corrupted or corruptable. It also did not mean that there were no problems in the way the county conducted the election, he added.

Benson said in a statement: “Today’s dismissal of the last of the lawsuits attempting to undermine democracy in furtherance of the #BigLie affirms that despite incredible scrutiny & an unprecedented effort to deceive, the 2020 election was fair, secure & the results accurately reflect the will of the people.”

“And while this case may be over, we must remain vigilant against the ongoing attempts of democracy deniers to use deceit & misinformation to enact policies that will block access to the vote in future elections. Truth & democracy will prevail, but only if we demand that it does,” she added.