Evidently, the perps who participated in the Andy Ngo assault have yet to be identified or charged 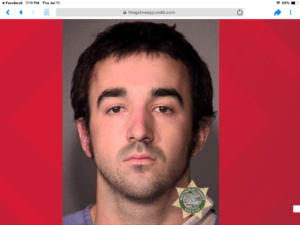 One of the violent, far-left thugs who participated in the Portland Antifa beatings was arrested identified and arrested by police on Tuesday.  The antifa thug was involved in the lesser publicized mob assault on a Adam Kelly, who’s head was split open and required stitches and staples. 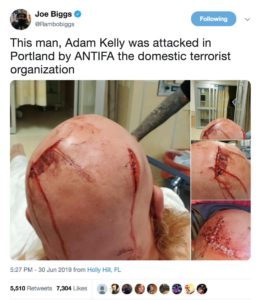 A grand jury on Tuesday indicted a Portland man for his alleged involvement in a June 29 protest downtown that turned violent. He is scheduled to be arraigned Wednesday.

Gage Halupowski, 23, faces four criminal charges — second-degree assault, unlawful use of a weapon, attempted assault of a public safety officer and interfering with a peace officer.

The protest was one of several in Portland on June 29 as left and right-wing demonstrators held rival gatherings downtown, halting traffic and public transit for much of the afternoon. Police declared a civil disturbance and unlawful assembly a little after 3 p.m., and the crowd dispersed before the afternoon was over. Medics treated eight people for injuries, including three police officers. Conservative writer Andy Ngo was one of the people injured, and he appeared to be attacked by antifa members.

A probable cause affidavit says Halupowski was one of many protestors involved in a fight at Pioneer Courthouse Square. In the affidavit, a Portland police officer states that several people in black clothes and masks were chasing a man, and then kicked, punched and hit him with batons after he fell to the ground. The officer said he saw Halupowski run up behind Adam Kelly, a man who had tried to stop the group from beating the other man, and struck him on top of the head with an expandable baton. The report also states that when another Portland police officer attempted to arrest Halupowski, he punched her in the arm and then ran away before being arrested.

Evidently, the perps who participated in the Andy Ngo assault have yet to be identified or charged.