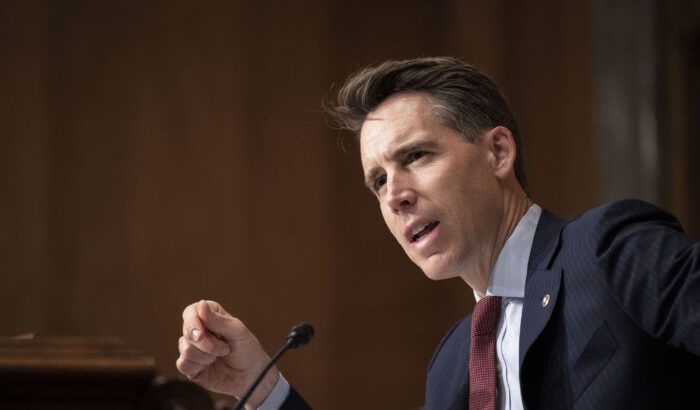 Two GOP senators have urged the Department of Defense (DoD) to immediately investigate whistleblower allegations that hundreds of Afghan evacuees who appeared on official watchlists were not properly vetted before they were released into the United States.

The BEWL identifies individuals whose biometrics have been collected and determined by analysts to be threats or potential threats to national security, including known suspected terrorists.

Hawley and Johnson said the whistleblower also alleges that White House and DoD officials instructed agency personnel to “cut corners” and not conduct full fingerprint tests on the evacuees at staging bases in Europe, “in order to promote the rushed evacuation from Afghanistan.”

Further, the whistleblower alleges that Department of Homeland Security (DHS) staff were authorized to delete old biometric data at their discretion, said the senators, who went on to say that this is a “troubling development that could threaten national security and public safety.”

“We write to you with concern over new allegations raised by a Department of Defense (DoD) whistleblower. This information may show the Biden Administration’s failure to vet those evacuated from Afghanistan was even worse than the public was led to believe. The following allegations demand an immediate investigation by your office,” the senators wrote.

The DoD has previously admitted in a report that the National Counter-Terrorism Center (NCTC) did not vet all Afghan evacuees “using all DoD data prior to arriving in” the United States.

The DoD earlier this year said that it identified 50 Afghan individuals in the United States whose records indicate they might pose a significant security concern.

Hawley and Johnson said they “understand that number has risen to at least 65,” and declared that the individuals “need to be immediately located, fully vetted, and, if appropriate, deported.”

The senators noted that the 324 Afghan individuals allegedly on the watchlist are in addition to the 50 or 65 already identified.

Hawley and Johnson asked O’Donnell to confirm how many BEWL matches were generated by biometric submissions from Afghan evacuees.

Of these matches, if any, the senators asked the DoD acting inspector general to clarify if any were denied entry, admitted entry, or currently in the United States.

The senators also sought information about the allegations that NSC or DoD staff instructed personnel to cut corners in processing the evacuees’ fingerprints, and asked for clarification on the circumstances under which agency personnel may delete biometric data.

Hawley and Johnson also asked O’Donnell to clarify the number of BEWL matches generated by Afghan evacuees after they arrived; what steps have been taken toward identification, vetting, or deportation; and how many were known suspected terrorists.

Additionally, the senators asked if the FBI or other law enforcement were investigating the individuals.

Wray wasn’t able to give a clear answer about the FBI’s efforts to track down and interview the 324 Afghan evacuees, but noted that “there are a number of individuals, through our joint terrorism task forces, that we are actively trying to investigate.”

The FBI director noted that the agency had disrupted a number of actions related to the evacuees, but did not specify what they were.

Regarding the allegations of cutting corners, Wray said: “I will say that this was a massive number of people to be vetting in an extraordinarily short period of time and that in my view inevitably raises concerns.”

“Oh, I think you’re absolutely right about that,” Hawley responded. “‘Inevitably raises concerns’ I think is the is the nicest thing that could be said about it.

The Afghans were being granted Special Immigrant Visas entitling them to bring their families.

The Epoch Times reached out to the DoD for comment.