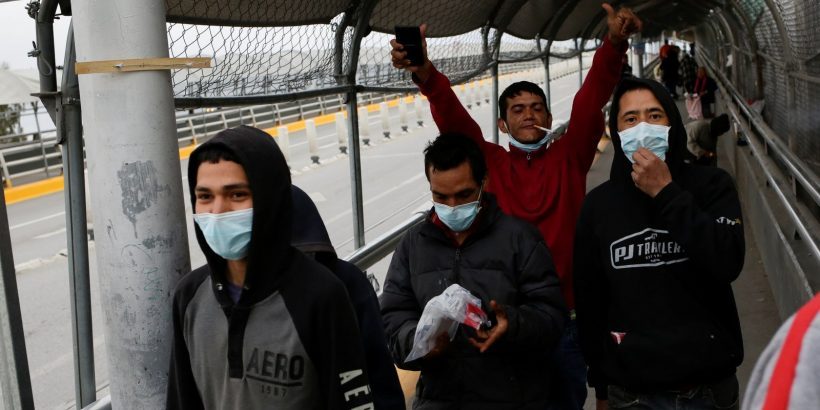 Migrants who are attempting to illegally cross the U.S.–Mexico border into the United States claim that President Joe Biden encouraged them to come.

“Biden promised us that everything was going to change,” Gladys Oneida Pérez Cruz, a woman who traveled to the border with her child, told The New York Times on March 14. “He hasn’t done it yet, but he is going to be a good president for migrants.”

Pérez said a coyote—a human smuggler—charged her $9,000 for the trip to the border. The woman said she and her son embarked on the journey on Feb. 7 and hoped to reach her sister in Maryland. Hours after crossing the border, they were apprehended by Border Patrol agents, the news outlet stated, adding that Pérez decided to return to Honduras.

According to the paper, another woman claimed, “Biden promised us!” The paper had a byline from Ciudad Juárez, Mexico, a city located next to El Paso, Texas. “I did not make it,” another woman was heard saying into her phone around the same time.

But Acting Border Patrol Commissioner Troy Miller recently told reporters in a conference call that “the border is not open” to migration. “Do not believe human smugglers who tell you otherwise,” he said.

Coyotes and cartel members, however, are reportedly promising migrants that the United States is now open under the nascent Biden administration. Starting on his first day in office, President Joe Biden undid several of former President Donald Trump’s executive orders regarding border security.

Republicans have been quick to denounce the surge of migrants at the border, with House Minority Leader Kevin McCarthy (R-Calif.) leading a delegation of about 12 GOP representatives to the border on March 15. They have said that Biden’s executive actions were solely responsible for the surge in illegal immigrants.

Over the past weekend, House Speaker Nancy Pelosi (D-Calif.) said the surge is a “humanitarian challenge” while stressing that Trump’s immigration orders created the crisis. Department of Homeland Security (DHS) Secretary Alejandro Mayorkas made a similar assertion several weeks ago when questioned about the border situation.

Separately, the U.S. Customs and Border Protection agency stated that they’ve encountered more than 100,000 migrants at the border in February alone, while numerous elected officials who represent border areas in the United States have described the situation as a crisis. White House officials have so far declined to refer to it as such.

The DHS stated in a recent update: “The federal government is responding to the arrival of record numbers of individuals, including unaccompanied children, at the southwest border. Since April 2020, the number of encounters at the border has been rising due to ongoing violence, natural disasters, food insecurity, and poverty in the Northern Triangle countries of Central America.”

“The federal government is working around the clock to move unaccompanied children” to Department of Health and Human Services facilities, the DHS stated.

DHS didn’t respond to a request for comment by press time.