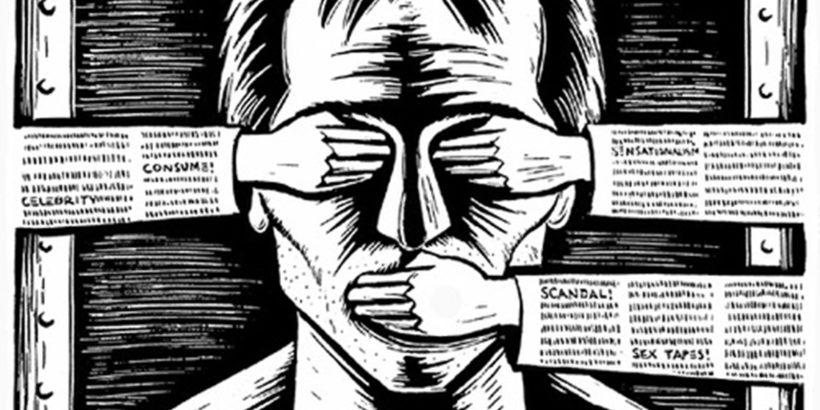 Perception. Perspective. Have you noticed that yours is being mocked, ridiculed, attacked, or even censored?

Who gets to claim ownership over a thought? Isn’t it yours, entirely? Can we not choose to listen to whomever we wish, or, also choose to tune voices out if their perceptions and perspectives do not happen to align with ours?

“Misleading“? “Problematic“? Says who?! Last I checked, I am still waking up each morning in America, where speech is protected by law. Censorship is reaching a fever pitch, and it appears that President Trump and VP Pence are not enjoying the perpetrators being out of tune!

One important thing to remember, C-Vine Patriots, while on this topic; we need sleeping ‘sheeples’ to wake up!

How does that happen? Q has been telling us for 3 years now. People must be shown what is happening. People need to see it for themselves. So as we move through this storm, things are not meant to feel calm.

Have Faith!  Trust the Plan. We’ll get there when the timing is perfectly right!

Vice President Mike Pence said that the Trump administration is strongly opposed to censorship of conservatives by social media and big tech companies.
Pence told Breitbart in an exclusive interview Friday that suppression of conservative voices ahead of the November general election will be met with a response from the White House.

“Well, the president has made it very clear that we are not going to tolerate censorship on the Internet and social media against conservatives,” Pence said. “We’re just not going to tolerate it.”
The Vice President did not provide details regarding what form the Trump administration’s opposition might take, but the Wall Street Journal reported over the weekend, anonymously citing “people familiar with the matter,” that the White House was mulling the creation of a commission that would evaluate claims of anti-conservative bias.

Trump has repeatedly voiced concern over alleged suppression of conservatives by big tech and social media companies. In a May 16 tweet, the president accused several popular platforms of serving the “radical left” and hinted at a White House-led remedy.
“The Radical Left is in total command & control of Facebook, Instagram, Twitter and Google,” Trump said in the tweet, adding that the administration is “working to remedy this illegal situation.” 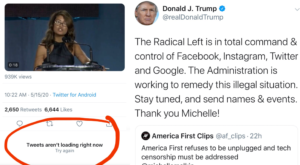 Radio talk show host Dennis Prager several years ago sued Alphabet Inc., which owns Google and YouTube, arguing that YouTube’s “animus” toward his “political identity and viewpoint” led it to curb access to videos, including through its “Restricted Mode” setting, on such topics as abortion, gun rights, Islam and terrorism, despite its stated promise of neutrality.

Alphabet later won the dismissal of the lawsuit, with the judge saying Google and YouTube did not qualify as “state actors” subject to the First Amendment by creating a “public forum” for speech.
“Defendants are private entities who created their own video-sharing social media website and make decisions about whether and how to regulate content that has been uploaded on that website,” U.S. District Judge Lucy Koh wrote. “Plaintiff has not shown that defendants have engaged in one of the very few public functions that were traditionally exclusively reserved to the state,” she added.

Steps to ramp up content moderation taken by social media companies in the face of the COVID-19 pandemic have done little to allay conservative concerns. In March, Google and Alphabet CEO Sundar Pichai published an announcement noting that YouTube, which is owned by Google, had removed thousands of COVID-19 videos its content moderation tools and staff deemed “misleading.”

“On YouTube, we’ve taken down thousands of videos related to dangerous or misleading coronavirus information, and we continue to remove videos that promote medically unproven methods to prevent coronavirus in place of seeking medical treatment,” Pichai wrote. But many conservatives hold that the standards for determining what is “misleading” are insufficiently transparent and prone to politically-motivated tilt.

Youtube CEO Susan Wojcicki announced a policy on April 22 that “anything that would go against World Health Organization recommendations would be a violation of our policy,” and that it would be “removing information that is problematic.”

China was recently accused by President Trump’s national security advisor of intentionally giving “false information” to the World Health Organization and the president has warned of permanent cuts to its funding.

Mark Grabowski, an associate professor specializing in cyber law and digital ethics at Adelphi University, told The Epoch Times there’s a double standard when it comes to online speech, in particular with COVID-19 related topics. “In some cases, the [virus] content was produced by authoritative sources like physicians, professors, and epidemiologists,” he said. “Meanwhile, these same platforms are promoting highly speculative opinions by people who are completely unqualified to speak on the topic.”

At last year’s White House-hosted social media summit, conservative critics denounced a range of alleged practices by big tech companies, with Trump weighing in with allegations of unfair treatment. “We have terrible bias. We have censorship like no one has any understanding, nobody can believe,” Trump said at the event. “They’re playing with a lot of minds and they’re playing unfairly.”

Matthew Feeney, director of the Project on Emerging Technologies at Cato Institute, a libertarian think-tank, argued in a recent op-ed that while the content-moderation policies of social media companies might anger some, imposing excessive restrictions would be counterproductive. “Facebook, Twitter, YouTube, and many others made the prudent business decision not to use the First Amendment as their content moderation guideline,” Feeney wrote.

“With billions of people using these companies’ products, it shouldn’t be surprising that their content‐​moderation policies will sometimes irritate and anger some of their users,” he continued, adding, “But such irritation should not prompt proposals that are contrary to the principles of free speech and risk destroying the Internet of today that—while far from perfect—remains the best venue for speech in history.”

Bowen Xiao contributed to this report.