The extraordinary back-and-forth began hours earlier at a pro-choice rally hosted by the Center for Reproductive Rights, when Schumer ominously singled out President Trump’s two Supreme Court picks: “I want to tell you, Gorsuch. I want to tell you, Kavanaugh. You have released the whirlwind and you will pay the price!” Schumer warned. “You won’t know what hit you if you go forward with these awful decisions.”

Roberts replied in his remarkable written statement, obtained by Fox News: “This morning, Senator Schumer spoke at a rally in front of the Supreme Court while a case was being argued inside. Senator Schumer referred to two Members of the Court by name and said he wanted to tell them that ‘You have released the whirlwind, and you will pay the price. You will not know what hit you if you go forward with these awful decisions.'”

Roberts continued: “Justices know that criticism comes with the territory, but threatening statements of this sort from the highest levels of government are not only inappropriate, they are dangerous. All Members of the Court will continue to do their job, without fear or favor, from whatever quarter.”

Schumer spokesman Justin Goodman quickly responded by accusing Roberts of bias, further escalating the confrontation. Goodman insisted that Schumer was addressing Republican lawmakers when he said a “price” would be paid — even though Schumer had explicitly named Kavanaugh and Gorsuch.

“Women’s health care rights are at stake and Americans from every corner of the country are in anguish about what the court might do to them,” Goodman said in a statement to Fox News. “Sen. Schumer’s comments were a reference to the political price Senate Republicans will pay for putting these justices on the court, and a warning that the justices will unleash a major grassroots movement on the issue of reproductive rights against the decision.”

That was an apparent reference to Trump’s call for those liberal justices to recuse themselves from some cases due to alleged bias. (“I just don’t know how they cannot recuse themselves to anything having to do with Trump or Trump-related,” Trump said. Ginsburg, who has publicly defended Kavanaugh and Gorsuch as “very decent” and “very smart,” previously called Trump a “faker,” and Sotomayor sharply criticized the administration in a recent dissent.)

“You have released the whirlwind and you will pay the price! You won’t know what hit you if you go forward with these awful decisions!” 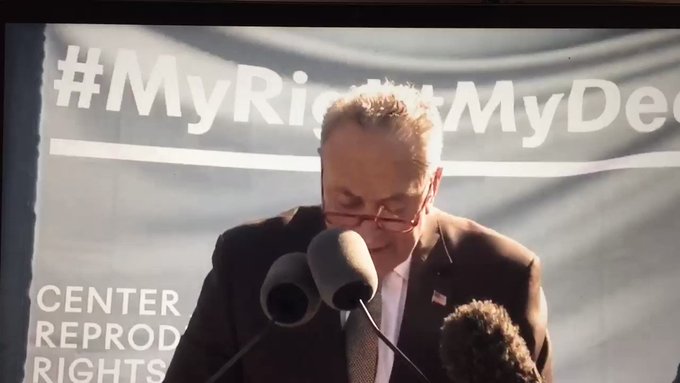 Video of Schumer’s remarks had quickly circulated on social media, with Republicans and prominent liberals casting the comments as a clear threat against two sitting Supreme Court justices. Schumer, they said, had gone far beyond merely requesting that justices recuse themselves as he stood in front of the Supreme Court Building.

Late Wednesday, Trump used Schumer’s own words to condemn him.

“There can be few things worse in a civilized, law abiding nation, than a United States Senator openly, and for all to see and hear, threatening the Supreme Court or its Justices,” Trump wrote on Twitter. “This is what Chuck Schumer just did. He must pay a severe price for this!”

Trump also tweeted: “This is a direct & dangerous threat to the U.S. Supreme Court by Schumer. If a Republican did this, he or she would be arrested, or impeached. Serious action MUST be taken NOW!”

There can be few things worse in a civilized, law abiding nation, than a United States Senator openly, and for all to see and hear, threatening the Supreme Court or its Justices. This is what Chuck Schumer just did. He must pay a severe price for this!

This is a direct & dangerous threat to the U.S. Supreme Court by Schumer. If a Republican did this, he or she would be arrested, or impeached. Serious action MUST be taken NOW!

Today’s Left:  First Schumer tells President-elect Trump: “You take on the intelligence community, they have six ways from Sunday at getting back at you.”

Today he threatens 2 Supreme Court justices: “You will pay the price. You won’t know what hit you.”

Sen. Josh Hawley, R-Mo., said he would introduce a resolution to censure Schumer.

“I would call on Schumer to apologize, but we all know he has no shame,” Hawley wrote. “So tomorrow I will introduce a motion to censure Schumer for his pathetic attempt at intimidation of #SupremeCourt.”

Even left-wing Harvard Law School professor Laurence Tribe tweeted: “These remarks by @SenSchumer were inexcusable. Chief Justice Roberts was right to call him on his comments. I hope the Senator, whom I’ve long admired and consider a friend, apologizes and takes back his implicit threat. It’s beneath him and his office.”

These remarks by @SenSchumer were inexcusable. Chief Justice Roberts was right to call him on his comments. I hope the Senator, whom I’ve long admired and consider a friend, apologizes and takes back his implicit threat. It’s beneath him and his office. https://www.washingtonpost.com/politics/schumer-vows-kavanaugh-gorsuch-will-pay-the-price-for-vote-on-abortion-rights-case/2020/03/04/ce4ae2b4-5e5a-11ea-9055-5fa12981bbbf_story.html …

Republicans seized on the Senate minority leader’s comments as threats. His spokesman said he was referring to the price that the Republican Party would pay for such a decision.

“The American Bar Association is deeply troubled by today’s statements from the Senate Minority Leader threatening two sitting justices of the U.S. Supreme Court over their upcoming votes in a pending case,” the ABA said in a statement. “Whatever one thinks about the merits of an issue before a court, there is no place for threats — whether real or allegorical. Personal attacks on judges by any elected officials, including the President, are simply inappropriate. Such comments challenge the reputation of the third, co-equal branch of our government; the independence of the judiciary; and the personal safety of judicial officers. They are never acceptable.”

During Kavanaugh’s contentious confirmation battle in late 2018, a mob of left-wing protesters banged on the doors of the Supreme Court Building, many of them complaining about his possible future abortion rulings.

SCOTUS APPARENTLY AT ODDS OVER ABORTION LAW DURING ORAL ARGUMENTS

Schumer noted at the rally that an upcoming Supreme Court case, June Medical Services LLC v. Russo, is the first “major” abortion case since President Trump’s court picks have been on the bench.

The dispute, dealing with restrictions over who can perform abortions, involves a Louisiana law similar to one in Texas that the court ruled unconstitutional in 2016, before either Trump justice was on the Supreme Court and before conservatives held a 5-4 majority.

Is no one going to point out that on top of everything else Schumer badly mangled a famous line from the Bible (Hosea)? “They have sown the wind and they shall reap the whirlwind”

Schumer Warns Gorsuch And Kavanaugh: ‘You Have Released The Whirlwind And You Will Pay The Price’ https://dailycaller.com/2020/03/04/schumer-kavanaugh-gorsuch-abortion/

Schumer did not specifically explain what “price” the justices would face. During the rally, however, Schumer did go on to describe how Republican lawmakers could be impacted politically.

“We will tell President Trump and Senate Republicans who have stacked the court with right-wing ideologues that you’re gonna be gone in November, and you will never be able to do what you’re trying to do now ever, ever again!” he said. Earlier in his address, Schumer had accused Republican legislatures of “waging a war on women” and said reproductive rights are “under attack in a way we haven’t seen in modern history.” 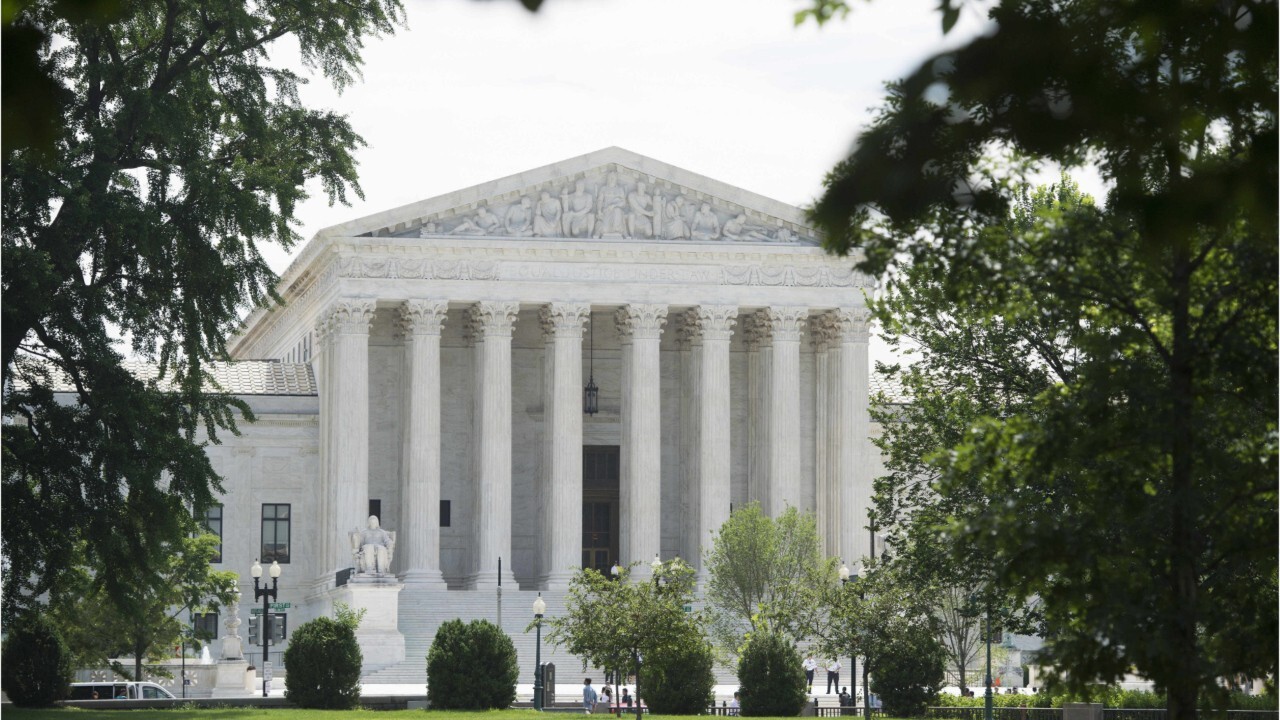 The case before the court is part of a larger effort by red states to pass laws regulating abortion to test how supportive the new justices will be of precedents such as Roe v. Wade and Planned Parenthood v. Casey, which formed the basis for abortion being legal.

The law in question requires abortion doctors in Louisiana to have admitting privileges at a nearby hospital in case a patient experiences complications during or after a procedure. Those backing the law argue that it regulates abortion providers similarly to how other medical providers are regulated by the state while also ensuring doctors are competent. Opponents say that it is targeted at abortion providers with the goal of shutting them down, citing a 2016 case out of Texas in which the Supreme Court invalidated a very similar law.

The court’s opinion in the 2016 case, Whole Women’s Health v. Hellerstedt, said the law placed an undue burden on women seeking abortions because it would significantly reduce the number of available facilities in the state.

During Wednesday’s oral arguments, Kavanaugh and Roberts questioned whether Lousiana might be different from Texas in terms of the practical effect the law would have.

“Assume all the doctors who currently perform abortions can obtain admitting privileges, could you say that the law still imposes an undue burden, even if there were no effect?” Kavanaugh asked.

Roberts suggested other states may have different standards that might be constitutional.

Gorsuch did not speak during the arguments.

Wednesday’s statement was not the first time Roberts has felt compelled to issue an unusual public rebuke of a sitting officeholder, and he has demonstrated his willingness to take on Republicans and Democrats alike. In 2018, Roberts defended the judiciary after Trump railed against what he called an “Obama judge.”

“We do not have Obama judges or Trump judges, Bush judges or Clinton judges,” Roberts said at the time, in a statement also released by the court’s public information office. “What we have is an extraordinary group of dedicated judges doing their level best to do equal right to those appearing before them.”

Roberts, writing on the eve of Thanksgiving, concluded: “That independent judiciary is something we should all be thankful for.”

Trump quickly shot back: “Sorry Chief Justice John Roberts, but you do indeed have ‘Obama judges,’ and they have a much different point of view than the people who are charged with the safety of our country.”