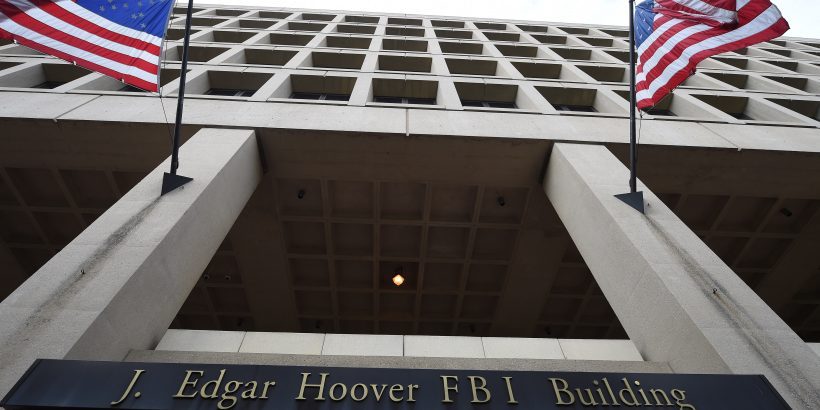 For a long time, the FBI has stood as the admirable symbol of a police agency of government, implacably going after the bad guys and neutrally enforcing the laws. This is the FBI of the movie “The Untouchables,” in which special agent Eliot Ness leads his devoted crew of armed agents in a heroic battle against the forces of organized crime.

Well, forget about the Untouchables. Today’s FBI has quite obviously been corrupted from the top. This is a process that seems to have begun under President Barack Obama, endured during the President Donald Trump years, and has now reached its unfortunate nadir under President Joe Biden. It’s time for conservatives and Republicans to start thinking about getting rid of the FBI.

I want to highlight two sets of contrasting episodes that give us a window into how biased and partisan this once-respected agency has now become. Contrast the treatment the FBI has given to Jan. 6 activists with that it has afforded to Antifa and Black Lives Matter protesters.

The FBI has unrelentingly hunted down Jan. 6 protesters, in many cases confronting Trump supporters who were merely in Washington at the time, or at the mall rally but not involved in entering the Capitol.

Those who have been arrested have been treated like domestic terrorists, captured in raids involving drawn weapons, even though the charges against most of them amount to little more than trespassing or entering a government facility without proper permission.

Nonviolent offenders have been given the same brutal treatment as violent ones. And to this day, the FBI promulgates images—a grandma here, a teenager there—asking the public to help them track down still-at-large individuals who had something, anything, to do with the events of Jan. 6.

Contrast this concentrated effort with the lackadaisical, even disinterested, approach of the FBI to the Antifa and Black Lives Matter activists. Over a period of many months, those activists have proven far more violent. They have killed a number of people, in contrast to the Trump activists who killed nobody. (The only person killed on Jan. 6 was Ashli Babbitt, a Trump supporter shot in the neck by a Capitol police officer.)

They have looted businesses, burned churches, assaulted police officers, attacked and harassed ordinary citizens eating in restaurants or going about their normal lives—and all with impunity. No FBI raids, no systematic arrests, no dissemination of “Wanted” images on social media.

Now, I turn to my second contrast: the recent FBI raid on Rudy Giuliani’s home and office, while there has been no raid on the home or office of New York Gov. Andrew Cuomo.

Start with Giuliani: The ostensible justification for the raid was to look for evidence Giuliani violated the Foreign Agents Registration Act.

Giuliani pointed out in a statement released by his lawyer, however, that he had offered to sit down with the FBI and the Biden Department of Justice (DOJ) and show them to their satisfaction that there had been no violation of law.

Moreover, Giuliani had for several months been offering the FBI clear evidence, corroborated by texts and emails, that Hunter Biden not only allegedly failed to register as a foreign agent, but also that he was allegedly involved in child pornography, money laundering, and an elaborate Biden family scheme to sell their political access in exchange for millions of dollars in personal gain.

Both the FBI and the DOJ showed no interest in any of that. Consequently, Giuliani seems warranted in concluding that the agency’s conduct is a “clear example of a corrupt double standard”: “One for high-level Democrats whose blatant crimes are ignored, such as Hillary Clinton, Hunter Biden, and Joe Biden” and quite another for “Republicans who are prominent supporters and defender of President Trump.”

Giuliani further revealed that the FBI and DOJ had, in late 2019, obtained access to his email database without notifying him. This means that while Giuliani was advising his client Donald Trump during the impeachment process—a relationship fully protected by attorney–client privilege—the FBI violated the law while supposedly investigating Giuliani and Trump’s possible violations of law.

Here, again, the FBI’s extreme diligence in going after Giuliani can be contrasted with the FBI’s failure to act in the case of Cuomo. Cuomo is currently involved in two separate scandals, one involving multiple women who have accused him of sexual harassment, and another involving his direct involvement in a cover-up scheme to hide the magnitude of nursing home deaths caused by his own policies.

According to The New York Times, the Cuomo administration was far more culpable than previously known in deliberately undercounting nursing home deaths over a period of five months. Let’s recall that these deaths need not have occurred. At the direction of the Trump administration, the U.S. Navy dispatched the hospital ship Comfort to New York to accept non-coronavirus patients and thus lessen the burden on New York hospitals.

Cuomo, however, turned the ship away to spite the Trump administration and instead ordered New York nursing homes to accept the overflow of COVID-19 patients, helping the virus to spread among vulnerable nursing home populations and thus causing thousands of unnecessary deaths.

Then, when the Trump administration inquired about the nursing home data in New York, Cuomo instructed his state health officials, including health Commissioner Howard Zucker, not to release the true death toll to the federal government, state officials, or the general public. Cuomo also suppressed a research paper that revealed the data and blocked two letters by Zucker’s department from being sent to state legislators.

While Giuliani’s offense remains unclear, Cuomo is guilty of obvious abuses of power—actions that have not only put people in their graves but also amounted, in a statistical sense, to “hiding the bodies.” Again, the FBI is nowhere to be found, and the reason for its absence appears to be that Cuomo is a Democratic governor who seemingly enjoys immunity as far as today’s FBI and Biden’s DOJ are concerned.

Enough is enough! When justice no longer involves the neutral or equal application of the laws, it ceases to be justice. I realize, of course, that there will be no FBI reform under Biden. Therefore, I strongly urge the Republican Party to make the abolition of the FBI—shutting down the agency and then reconstructing it from the ground up—key provisions of its campaigns both in 2022 and 2024.