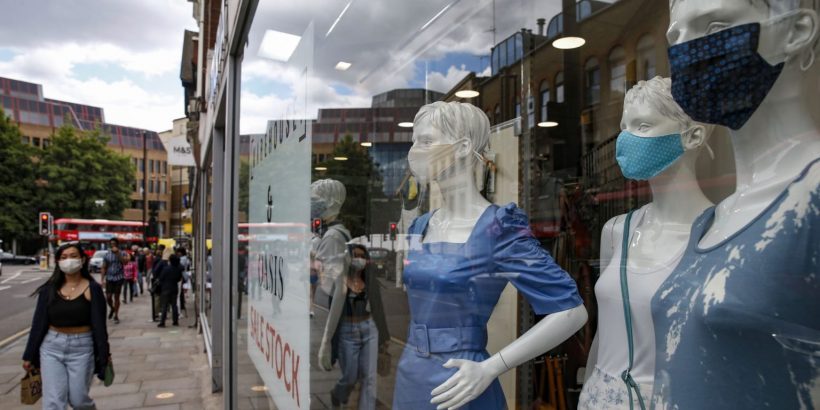 Just when the authorities allow us to take off our masks, they demand that we put them back on. Americans might reasonably wonder if there will ever be a return to “normal.” But obey we must, lest we be in gross violation of the mandates created for us by our betters, who know, better than we do, what’s best for us.

From the onset of the lockdowns, one of their loudest critics has been Fox News host Laura Ingraham. Miss Laura has repeatedly expressed her disdain for the term “the new normal.” Even so, the regular old “old normal” had its problems, one of which was how we handled “congregant settings.” We weren’t very prudent about how we mingled, massed, rubbed shoulders, and got together, i.e. congregated.

Efforts to practice “social distancing” in packed congregant settings are sorely tested in many of the activities that we Americans take for granted, such as attending sports events, movies, concerts, bars, restaurants, demonstrations, insurrections, riots, and so on. People like to cram themselves into arenas and work themselves up into an ecstatic quasi-religious frenzy when their tribe’s team carries a ball across a goal line. And all the while they’re breathing on each other and spraying spittle. Young people, especially, have a need to be with each other, and in cramped quarters, as when they queue up to get into exclusive nightclubs, like Studio 54 back in the old days. How many cases of the coronavirus have been passed to the immuno-compromised by young people who’ve attended all-night raves or today’s equivalent of Studio 54?

One of the features of the old normal that we need to leave behind is how we dealt with congregant settings. This kid thinks that attending certain gatherings, like rock concerts, is a version of Hell. But there’s one type of congregant setting that I do go in for, but it involves a more sophisticated group of congregants than rock fans, and that’s opera.

During a 1975 performance of Tristan und Isolde in Dallas, several audience members were having major coughing fits. Finally, in Act 3, their Tristan, the late great Canadian tenor Jon Vickers, had had enough, and from the stage yelled this at the audience: “Shut up with your damned coughing!” This audio of Vickers’ outburst will take 18 seconds out of your life:

Even at the Metropolitan Opera in oh-so-sophisticated New York City, one can have one’s night at the opera ruined by a single attendee with a persistent hack. I’m not sure which is worse: being exposed to contagion by coughers or having your opera ruined by them.

But the operagoer sitting in the seat next to you needn’t be a cougher to give you some dread disease. Imagine sitting for hours through the entirety of Tristan seated next to someone who is an asymptomatic carrier of the Wuhan virus. Opera companies, playhouses, concert halls, and other performing arts venues should not allow sick folks to attend their productions. And those who cough during a performance should be escorted out and held until police arrive.

The last time I heard Jon Vickers in the flesh was in a 1988 recital in Kansas City.  After his recital, Vickers greeted attendees in a reception line. When my turn came around, I expressed my appreciation and then committed an act that today would be thought shocking: I shook Mr. Vickers’ bare hand … with my own bare hand! (At least I didn’t cough on him.)

If one wants to go out in public and mingle with the masses, maybe even take in an opera, then one should not knowingly have any communicable disease. Perhaps that’s a part of a new normal Ms. Ingraham would go for.

The 1995 sci-fi flick 12 Monkeys was prescient. It created a bleak future in which a lab-engineered virus has wiped out all of humanity except for a tiny remnant that lives deep underground. Some of the survivors are prisoners. As one prisoner is being led to a meeting with a panel of scientists, we hear this over the PA system: “There will be socialization classes in room 700 for citizens cited for deviations 23-A and 96-A per subchapter six of the Permanent Emergency Code”:

SCIENTIST: Thank you. You two wait outside.

Compared to the devastating virus dreamt up for 12 Monkeys, the Wuhan virus is more like the coronavirus that causes the common cold, it’s even rather benign compared to the Spanish flu of a century ago. Despite that, the Democrats are using the pandemic for their own ends. The mandates and lockdowns are the means by which the Dems hope to lock in their political power permanently.

The lockdowns only make sense when protecting the immuno-compromised and the elderly; in other words, those who should already have been locked down, sheltering in place. Rather than a quarantine of just those folks, the authorities quarantined everybody, and in doing so killed off countless small businesses and livelihoods.

If the vulnerable had isolated and hunkered down to wait for a cure, the rest of America could have stayed open for business with just a few safety measures, which was exactly what essential workers did. The lockdowns are one of the more unnecessary and harmful things government has ever inflicted upon the People.

The Democrats have made COVID-19 into “the worst thing ever” to justify their shotgun approach to lockdown. Paradoxically, the more arbitrary and unreasonable the strictures of their lockdowns, the more they seem to lock in their authority.

The Democrats’ New Normal is an authoritarianism that they want to last forever. And the Dems don’t seem to worry about resistance from the People. After all, you aren’t gonna violate the “Permanent Emergency Code,” are you, Mr. Cole?

Jon N. Hall of ULTRACON OPINION is a programmer from Kansas City.