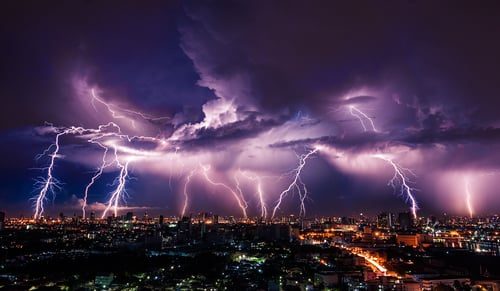 In the leadup to the 2020 Presidential Election, one candidate got far stronger, traveling to more than a dozen states and holding over two dozen rallies, while the other candidate hardly campaigned at all.

Republicans won all 27 of the House races that had been deemed to be toss ups.  Not a single state legislature flipped from red to blue.  After polls and pundits had confidently predicted that this would be a ‘Blue Wave election’, not only did the expected gains for Democrats not materialize, it was clearly a GOP-dominated election.

And yet in the end, at the very top of the ballot, the man who held more than twenty-five rallies the final week leading up to the day of the election supposedly lost to the doddering geriatric who mostly campaigned from his basement.

It was a Red Wave election except in two key areas: the presidency and in the Georgia Senate races.

And as the months have passed and the evidence has continued to emerge, it is getting harder and harder for those who insisted that the 2020 election was ‘the most secure in U.S. history’ to maintain that fiction.

The serious question that gripped half the country for more than three months as the Inauguration Day approached was this: how should President Trump and his supporters respond to this unprecedented situation of such a blatantly stolen election?

There were all kinds of expectations and theories about what Trump could or should do in order to not end up handing over the presidency to Joe Biden.

I myself wrote a column at the time wondering if Trump had any cards left to play or if it was game over.

And then the appointed day arrived and…Trump left. The nation watched Biden being sworn in on January 20th of this year.

Now in that earlier Epoch column I mentioned above about cards Trump might have left to play, I never advocated for, or called for him to use any kind of federal or military force to stay in the White House.
Some people did think that is what Trump should have  done.
After he handed over the keys to the White House to Joe Biden… angry and extremely disappointed supporters called Trump a traitor while others dismissed him as a wimp who chickened out.
He’s neither.  He’s actually a very patient man.
Those who thought Trump should have used
force to stay in power until
the election fraud was exposed…  have not thought that through.

The strategy of Trump sending in the military or the feds to seize control of several U.S. counties or states, arresting local officials while he sat up there in the White House in Washington D.C. and insisted he was not leaving until he was proven the real winner of the election could never have worked.

Instead of Trump sitting in Washington D.C. trying to hang on by his fingernails as a civil war broke out, what we have now got instead is an extremely powerful grassroots movement that is growing quickly and spreading all over the country. Trump doesn’t have try to do it himself because the American people are going to get it done.

After an evil cabal working behind the scenes ruthlessly used a pandemic to lock the country down to facilitate the stealing of a presidential election, the American people are responding as Americans to that outrage.

Make no mistake: this stolen election was one of the greatest crimes ever committed in this country. And the fact it was done so blatantly and arrogantly right in the face of entire country makes it doubly infuriating. And the villains behind that election theft who thought the American people would just roll over and accept this massive crime and eventually get over it and just move on are finding out just how mistaken they were
about that.

The Sleeping Giant Has Finally Awakened

The needed election reforms for the states could **never** have been imposed from Washington D.C. by Trump or anyone else. That was the whole point of the Democrat’s radical – and now dead – HR 1 “For The People” bill. The elites wanted state elections to be controlled directly from Washington. It amounted to a massive federal power grab from the states. And once you cede that kind of control to Congress, you’ll never get it back.

That kind of federal control over state election powers is wrong whether it’s being done by power hungry Democrats in our Congress or a Republican President who just had an election victory stolen right out from under him.

If Donald Trump had sat up there in D.C. and tried to prove the election theft and then force election reform on the country from the top down, using a raw exercise of federal power, that would have been a catastrophic failure. It had to come from the people themselves making it happen from the ground up at the local and state level.

It is the only way this could have worked, and everyone must grasp this.  It had to be this way.

Is An Awakened and Engaged Citizenry ‘The Storm’?

It was over three years ago in October of 2017 that Donald Trump made a strange remark at a military dinner about ‘the calm before the storm’.

Later, members of the news media demanded to know what this ‘storm’ was that Trump had brought up.

“You’ll find out.” Trump said,  with a cryptic smile.

Ever since that exchange with the press, there has been intense speculation in some quarters as to what President Trump meant by ‘The Storm”.

Right now, a whole lot of the people in our entrenched political class are beginning to get really impatient, as they had hoped all their fellow citizens stirred up by that election theft would have calmed down by now, and that all these newly engaged people suddenly showing up at school board and county meetings would have lost interest and gone home so the old hands could quickly go back to business as usual.

Only as the months have gone by, it’s becoming clear that’s not going to happen. Instead of losing interest and fading away, the number of people getting involved at the local level is growing. The American people have awakened and are energized and are demanding changes to their elections, their schools, their towns and cities, and their country. I have come to believe that this energized and awakened citizenry are the long anticipated “Storm”. And there will be no stopping them.