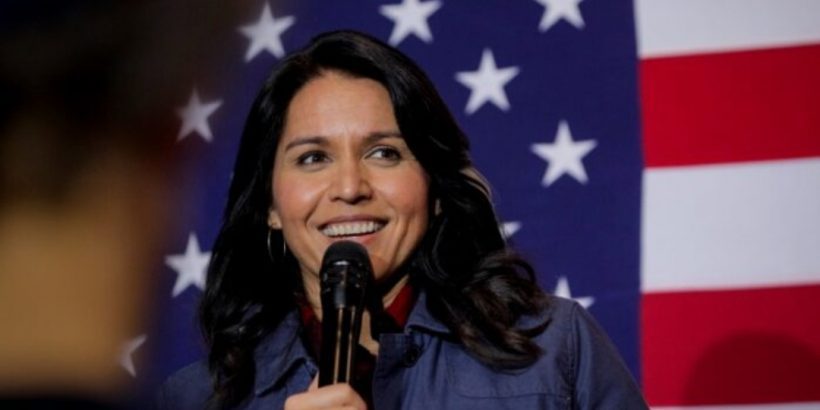 At least there appears to be one person in Congress who will loudly speak out against unconstitutional actions against the people she represents.

What a breath of fresh air!

It used to be there would be a nationwide chorus of dissent, if there was were treasonous actions against, “We the People”.

Below,  the Epoch Times gave the following report, but does not mention additional critical information…

Patriots and Trump Supporters were not there to cause violence, the Rally was peaceful until the end as proven by C-VINE video, and it was not proven who it was that caused the disruption.

Former Democratic presidential candidate and former representative for Hawaii, Tulsi Gabbard said in a series of tweets on Tuesday that John Brennans, the Adam Schiffs, and the oligarchs in Big Tech who take away civil liberties “are also domestic enemies and much more powerful.”

She called on President Joe Biden and all members of Congress from both parties to denounce the effort.

“The mob who stormed the capitol to try to stop Congress from carrying out its constitutional responsibilities were behaving like domestic enemies of our country,” the former congresswoman said.

“But let us be clear, the John Brennan’s, Adam Schiffs and the oligarchs in Big Tech who are trying to undermine our constitutionally-protected rights and turn our country into a police state with KGB-style ‘surveillance’ are also domestic enemies—and much more powerful, and therefore dangerous, than the mob which stormed the capitol,” she said.

The Biden administration initiated a federal agency level campaign 2 days after taking the office, to investigate domestic terrorism in the United States. White House press secretary Jen Psaki on Jan. 22 connected that investigation to the Jan. 6 protest at the Capitol.

“The Jan. 6 assault on the Capitol and the tragic deaths and destruction that occurred underscored what we have long known: The rise of domestic violent extremism is a serious and growing national security threat,” Psaki said.

Gabbard called on Biden and all the Congress members to denounce these efforts and said that the United States will be in great danger if people do not stand up to them.

“President Biden, I call upon you and all of Congress from both parties to denounce efforts by Brennan and others to take away our civil liberties endowed to us by our Creator, and guaranteed in our Constitution. If you don’t stand up to them now, then our country will be in great peril,” she said in the video posted to Twitter.

In the video, Gabbard included a segment of an interview by former CIA Director John Brennan by MSNBC on Jan. 20.

“I know looking forward that the members of the Biden team, who have been nominated or have been appointed, are now moving in laser-like fashion to try to uncover as much as they can about what looks very similar to insurgency movements that we’ve seen overseas,” Brennan said. “Where they germinate in different parts of the country, and they gain strength, and it brings together an unholy alliance, frequently, of religious extremists, authoritarians, fascists, bigots, racists, nativists—even libertarians.