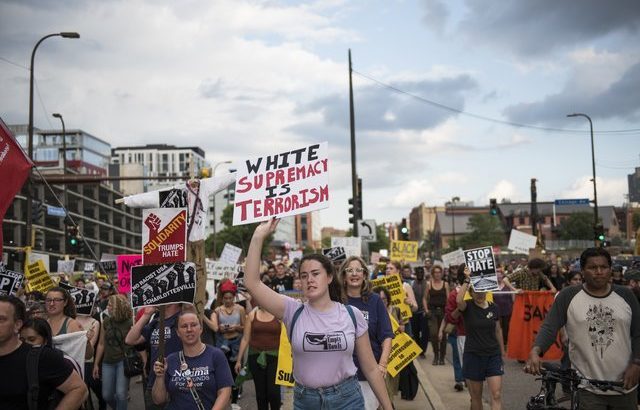 Last November, the now-defunct Trump Accountability Project, linked to former Democratic National Committee press secretary Hari Sevugan, bruited its plan to blacklist those who worked for the Trump administration.  Sevugan tweeted, “Employers considering them should know that there are consequences for hiring anyone who helped Trump attack American values.  Find out how at the Trump Accountability Project.” Representative Alexandria Ocasio-Cortez (Dem-NY) too called for devising lists of Trump supporters for punishment and ostracism. The rhetoric reeked of a witch-hunt to name and shame anyone linked to the former president.

Now that the Biden administration is securely ensconced in the White House, the blatant malice has been toned down with disingenuous calls for unity. But there’s persistent targeting of “unwoke” conservatives — in fact, of anyone not aligned with the hate America script of social justice warriors. In this, the Biden administration has been active. There are several recent instances that highlight a hypocritical progressive agenda to enforce groupthink and extinguish critical and independent thinking.

In May, the IRS denied 501(c)(3) status to Christians Engaged, a Texas-based prayer group that encourages members to pray for the country and its elected officials, motivates citizens to vote for cultural impact, and campaigns for preserving our constitutional republic. The group endeavors to integrate civic involvement as part of religious practice but does not promote any party or candidate. However, in his official letter denying tax exemption, Stephen A. Martin, the IRS’s director of exempt organizations, clearly implies that biblical values are exclusively Republican. He wrote: “While you educate voters on what the Bible says about issues, your educational activities are not neutral. The topics typically are affiliated with distinct candidates and specific political party [Republican] platforms.”

The First Liberty Institute, a Christian legal organization, is appealing the IRS decision as discriminatory. It argues that there is no requirement that organizations must be neutral on public policy issues, and that just because there is some overlap between the views of Christians Engaged and the Republican party, the IRS cannot conclude that the organization serves private interests. The IRS decision amounts to a violation of the free speech, free exercise, and free establishment clauses of the First Amendment. Declaring biblical teachings as exclusively Republican is the slippery slope that could lead to future discrimination against Christian organizations and even churches.

Remarkably, the Muslim Brotherhood (MB)-affiliated Council on American-Islamic Relations (CAIR) and the Islamic Society of North America (ISNA) enjoy tax exemption even though they have been shown to be financing terrorism. In the 2008 Holy Land Foundation case, the largest terror-funding trial in American history, the government had produced ample evidence that CAIR, INSA, and other MB groups were associated with the designated terror group Hamas. One MB document presented in court said the work of the Ikhwan in the U.S. is “a kind of grand jihad in eliminating and destroying Western civilization from within and sabotaging its miserable house by their hands and the hands of the believers so that it is eliminated and G-d’s religion is made victorious over all other religions.”

In another attack on conservative principles, Colorado baker Jack Phillips was fined $500 under the state’s anti-discrimination law for refusing to make a “gender transitioning” cake for a transgender activist. Colorado had earlier barred Phillips, a devout Christian, from designing custom wedding cakes after he declined to make one for a same-sex wedding. But he’d won a Supreme Court victory in 2018, explaining that he was unwilling to violate his beliefs and was exercising his First Amendment right to religious freedom.

Despite that ruling, Colorado officials have targeted him again. Phillips has filed a lawsuit citing his right to practice his faith as well as his right to equal protection under the 14th Amendment. Kristen Waggoner, general counsel for Alliance Defending Freedom, a Christian non-profit that’s representing Phillips, stated: “Radical activists and government officials are targeting artists like Jack because they won’t promote messages on marriage and sexuality that violate their core convictions.”

Meanwhile, kindergarteners at the Ashlawn Elementary School, Arlington County, Virginia, were subjected to transgender messaging on Read Across America Day. A cross-dressing male LGBTQ+ activist read to them from a factually false transgender picture book without parental knowledge or consent. The activist is a spokesperson for the Human Rights Campaign (HRC), which champions same-sex marriage, the expansion of LGBTQ+ rights, HIV/AIDS advocacy, and legislation on anti-discrimination and hate crimes. In attendance as a sponsor was the president of the National Education Association, a leftist union of 2.3 million public school teachers and college students preparing to become teachers. The union campaigns for abortion, socialized medicine, prisoner rights, and other causes dear to the Left.

Two additional examples of how conservatives are forced to endure viewpoint discrimination and correction (or indoctrination) hail from the national security sector and the military.

This month, the Biden administration announced the National Strategy for Countering Domestic Terrorism to target those who espouse “racial or ethnic bigotry and hatred” or “anti-government ideology or anti-authority sentiment.” While purporting to promote public safety, it aims to push Critical Race Theory, the Muslim-as-victim narrative, and other radical Leftist views. Rather than address the physical threat of terrorism, it targets ideological opponents of the Biden administration and encourages views “befitting a democracy” — as if only certain opinions confer acceptance. It principally targets white supremacists and violent extremists but fails to mention the anti-law enforcement, anti-American ideologies of Antifa,  Black Lives Matter, and Islamic terrorists (except for a perfunctory mention of Al Qaeda). For all intents and purposes, opposition to government policies is the new “terrorism” — not ISIS, not Al Qaeda, not Black Lives Matter, not Antifa.

In the military, there’s an agenda to root out ideas and people who oppose the Biden administration’s “fundamental transformation of America.” With the avowed purpose of eliminating extremism in the ranks, training material from the Pentagon mis-characterizes American laws and disparages citizens who believe in constitutional principles. It identifies no instances of racism or discrimination that would prompt such a program. But officers are instructed with talking points on “anti-government extremists” as proven by “recent events.” The allusion is clearly to Trump supporters or those who are against Biden’s progressive agenda. Contrary to the spirit of the First Amendment, the material states that service members must “reject” ideas and speech that threaten “to undermine our government” or face disciplinary action, including discharge. It explicitly lays out permissible and prohibited political activities and social media practices as part of a radical agenda to undermine constitutional freedoms and indoctrinate our troops.

During the “Summer of Love,” far-left mayors and city councils had dismissed the concerns of citizens over the rioting, arson, senseless murder, assaults on police, and the chaos in the lawless autonomous zones created by BLM and Antifa. Later though, even Seattle Mayor Jenny Durkan walked back her comments and confessed that the mayhem was not a viable vision for her city. One would have thought that a reasonable response following such anarchy would be for political leadership to reassess their policies, respond to the public outcry, and temper its rhetoric against conservative constitutionalists. Sadly, that hasn’t happened, and the “fundamental transformation of America” is advancing apace.

When crises are manufactured to target ideological foes and real threats are ignored, safety, security, and civil rights are sacrificed.  In all its dogmatism and intolerance, the progressive agenda of enforced cultural conformism is gaining ground.  The pushback that has already begun must become fierce.