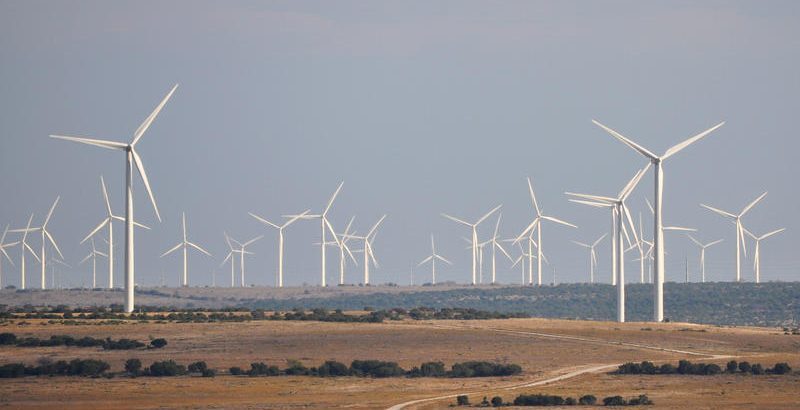 A leading environmentalist has told The Epoch Times that California’s plan to generate energy using the wind is harmful to the ecosystem.

While Gov. Gavin Newsom and the Biden administration tout the benefits of offshore wind development along California’s coast, Michael Shellenberger, a leading climate and environmental activist, deems the technology expensive, unreliable, and “incredibly disruptive” to the environment.

“It’s ironic, because [they] say they care about the natural environment [and] they don’t want to industrialize the oceans—[but] if you care about the environment, you should always be looking for ways to use less of it,” Shellenberger told The Epoch Times.

“During a heat wave—when you need to use a lot more energy for air conditioning—we won’t have that energy coming from that wind farm. So it’s not going to help at all for dealing with the energy shortages we have.”

Newsom has said that offshore wind development could be a “game changer to achieving California’s clean energy goals and addressing climate change—all while bolstering the economy and creating new jobs.” But Shellenberger counters that weather-dependent renewables may cause more harm than good.

Shellenberger is a best-selling author and founder of the nonprofit Environmental Progress. His latest book, “Apocalypse Never: Why Environmental Alarmism Hurts Us All,” aims to provide a sober evaluation of the potential impacts of—and solutions for—climate change.

“The problem is that we need power when the sun’s not shining [and] when the wind stops blowing,” he said.

“We have long periods of time where there’s no wind at all. [It’s] an inherent problem [with] trying to move towards renewables. They either make electricity very expensive, very unreliable, or both.”

Initial areas for offshore development in the Pacific Ocean are estimated to provide about 4.6 GW to the grid—enough energy to power 1.6 million homes over the next decade—along with thousands of good-paying union jobs, according to a May 25 press release issued by the White House.

“By taking a whole-of-government approach, the U.S. can smartly develop our nation’s world-class offshore wind energy resources [and] deploy new technologies that our government has helped advance … all in the service of combating the climate crisis,” McCarthy said.

Shellenberger contends that it won’t be nearly enough.

“The idea has been that they would use this large wind farm off the central coast of California to replace the Diablo Canyon Power Plant,” he said, referencing the state’s last remaining nuclear energy facility and its largest power plant, which is scheduled to be shut down starting in 2024.

“[But] it would only provide half the power total of Diablo Canyon, [which] provides power for 3 million people. … You can’t replace a reliable source of energy with an unreliable one. If the wind isn’t blowing, then you’re not gonna generate any electricity.”

Nancy Rader, executive director of the California Wind Energy Association, called the offshore project “a major breakthrough,” but also acknowledged it would be a “huge challenge.”

“Offshore wind development off the coast at Morro Bay and Humboldt will require a major port facility in each area to construct the floating platforms and assemble the turbines that will require continued proactive planning by the state and federal governments,” she told the San Francisco Chronicle via email.

Shellenberger said energy provided by weather-dependent renewables represents a paradox: “[They] don’t generate electricity when you need them.”

He pointed to lessons that California should have already learned due to reliance on solar panels for energy. In 2020, the state experienced its first rolling blackouts in nearly two decades.

“We’re the fifth largest economy in the world. … We should not be having power outages. And yet we are … because we have spent so much money on weather-dependent renewable energy sources, mostly solar,” said Shellenberger.

“The sun is going down when people come home from work, and that’s when power tends to go back up. So it’s really not matched well for our civilization.”

Shellenberger said the problems posed by solar energy panels run even deeper: By using between 300 and 400 times more land than nuclear or natural gas plants, they ultimately cause more damage to the environment.

The complexes also require about 17 times more steel and cement to construct, he added. “All of that additional material becomes a waste on the back end,” as opposed to uranium, which is easy to store, easy to care for, and provides an optimal amount of energy.

“The state of California has—for almost a decade—been figuring out what to do with all these solar panels, because as soon as you remove them from your roof, they become hazardous waste automatically,” he said.

Since solar panels cannot be deposited into a landfill, they have to be “specially processed,” thereby raising the cost of solar energy significantly.

Shellenberger refers to the skirting of these problems as “greenwashing”—meaning the industry creates a false impression of being environmentally friendly while overlooking eventual waste problems.

At the end of the day, he estimates that solar panels generate about 300 times more waste than nuclear energy resources. Moreover, he said the manufacturing of solar panels is taking place under “absolutely unethical conditions.”

“It appears that the vast majority of the solar panels that we import to the United States are made under conditions that the State Department calls genocide in the province of Xinjiang in China,” he said, referring to human rights abuses occurring against ethnic Uyghurs.

“This is a place where 1 to 2 million ethnic Muslim Uyghurs are in concentration camps, and being offered the choice to work in solar panel factories, but that’s coerced labor.”

He added, “When you think forced labor is being used to make something that’s game-changing, it means that you cannot continue to import those solar panels in the way that we have.”

‘Moving in the Right Direction’

Rather than fixating on “necessarily unreliable” weather-dependent energy sources that will “result in higher costs” than Californians already pay, Shellenberger proposes that state and federal officials turn their attention to problems that are more widespread than climate change.

While he believes that climate change is real, “it’s not the end of the world,” he said. “We’re actually moving in the right direction on a lot of metrics.”

For example, carbon emissions in the United States have declined more than they have in any other country in the world over the last 20 years, he said. “That was positive for the economy, produc[ing] about $100 billion in energy savings every year.”

Furthermore, humans are adapting more effectively to their environments, as evidenced by the fact that deaths from natural disasters have declined more than 90 percent since their peak in the 1920s. “That’s a huge success,” he said.

While about 300 people died from natural disasters in the United States last year, Shellenberger noted that an estimated 90,000 deaths were caused by drug overdoses—a figure that escalated from about 70,000 in 2019.

“It’s impossible for me, as somebody that’s been a climate [and] environmental activist for so long, to look at those numbers and not think the overdose crisis is significantly more important than climate change,” he said.

“It’s not to say that climate change won’t have any impacts—it very well could—[but] the global warming that we have is a side effect of our prosperity, of our flourishing, of our use of energy. And so we have to always put those things in balance.”

He added: “We need to get some clarity about the things that really are important, [and] also get clear about what are the sources of energy that we should … be using in order to improve people’s lives and lift everybody out of poverty while also protecting the environment.”