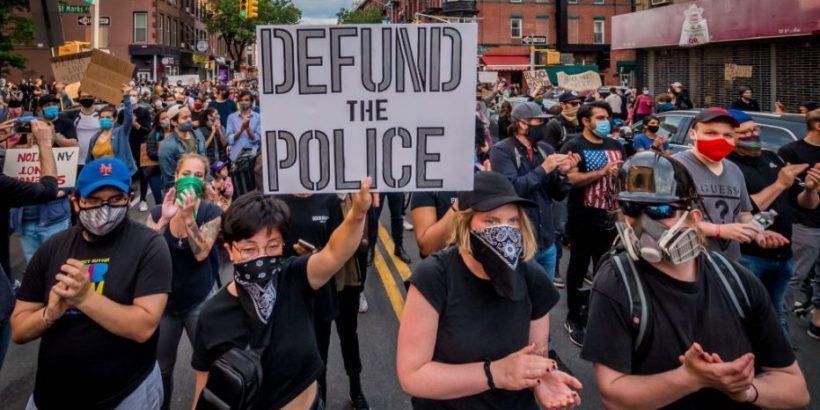 C-VINE News Opinion: The purpose of the “defund the police” movement is to weaken and eliminate local and state police department control to federalize or nationalize the police under a common agenda, taking control away from towns, cities, and states.

“Defund the police” has become a popular phrase among leftist activists, gaining momentum during a rash of Black Lives Matter protests and riots last summer following the police-custody death of George Floyd in Minneapolis in May 2020.

As news of these protests spread through the media, local governments across the country quickly started acquiescing to the demand. Cities such as New York and Los Angeles significantly cut cut funding for their police departments, while Minneapolis City Council went further, introducing a measure to try and outright abolish and replace its police department.

According to former Arizona police officer Brandon Tatum, author of the upcoming book, “Beaten Black and Blue: Being a Black Cop in an America Under Siege,” there is a broader agenda behind the “Defund the Police” movement.

“I believe it’s an agenda to completely destroy and dismantle local police departments so that the government can have control of law enforcement in this country and push a nationwide agenda,” Tatum told Jan Jekielek, host of EpochTV’s “American Thought Leaders” program.

Tatum explained that if law enforcement is federalized and there are unconstitutional mandates or restrictions, such as those involving vaccines or guns, the federal government will be able to enforce those directives more easily.

“I believe that the government has a lot more leverage federalizing these agencies, and that’s the end goal,” he added. “I don’t believe it has anything to do with racism, police brutality … That is a talking point to push an even bigger agenda.”

It is this agenda, he said, that “is really the cause of a lot of turmoil that we see in law enforcement and the crime rate that we see spiking around the country.”

According to the National Fraternal Order of Police, murder rates over the past year have skyrocketed in cities where police departments have been defunded. As of May 25, the murder rates in New York City and Chicago year on year were up 22 percent, in Los Angeles 27 percent, in Washington D.C. 35 percent, in Philadelphia 40 percent, in Minneapolis 56 percent, and in Portland a staggering 800 percent.

Tatum, who grew up in an inner-city in Texas, said the real issue for the black community is the homicide rates in the inner cities, where black people are primarily being killed by other black people.

“You know, police brutality is a small fraction of the drama, chaos, and confusion that goes on in the inner city. So, if they are pushing this as is as if it’s a pandemic or epidemic, then they are already being deceptive from the beginning,” he said.

The former police officer and cofounder of the BLEXIT movement said one need not be a conspiracy theorist to understand this. Statistics show that twice as many unarmed whites are shot by the police each year than unarmed blacks.

In 2018, the most recent year for which data on this is available, blacks made up 53 percent of homicide offenders in the United States and committed about 60 percent of robberies, while only making up 13 percent of the population.

The BLEXIT Foundation’s goal is to rectify the narrative of victimhood that permeates American minorities, particularly in the African-American community.

Tatum said his grandmother and those prior to her had just cause to point to racism and inequality because they actually faced slavery, segregation, and racism.

“However, that pain and suffering and that mistrust for white Americans has been passed down unjustifiably to next generations, later generations, and we don’t deal with those things,” Tatum said. “And when you have that, and you have a political climate where a certain particular party that wants your vote, they’re going to tell you what you want to hear and try to play this savior to an invisible problem, you know, they are going to push an agenda.”

Tatum went on to explain that the real violent crime problem facing African-Americans is outside the leftist mainstream media narrative.

“You know, they are going to push an agenda and that causes a lot of pain, hurt—real pain and hurt, lump on top of that confusion. You have this delusional state in the inner city. And then when your father is in prison, or your father has been murdered by another black man, it creates a level of hatred towards other black people,” Tatum added.

Tatum said the solution to violence and death in black communities is to focus on the facts, help heal past hurts, and rebuild families.

“The solution is to not politicize anything, this just should not be about politics—Democrat, Republican, conservative, liberal, libertarian—it should have nothing to do with politics and everything to do with real people that are being hurt in this country.”

Having a strong father growing up, Tatum knows how important fathers are to children, especially in black communities.

“You need a dad,” he said. “I don’t care what nobody says, I don’t care what any psychologists want to put out there and make up a myth on—you need your father. And the reason why I’m here today is because I had a strong Father.”

The Heritage Foundation cited a major 1988 study finding that “the percentage of single-parent households with children between the ages of 12 and 20 is significantly associated with rates of violent crime and burglary.” It noted that race was not a factor, only that the family was not intact.

According to a report by the Brookings Institute, in 1965, less than a quarter of black infants and just over 3 percent of white infants were born to single mothers. By 1990, the rate of infants born to single unmarried mothers had risen to 64 percent for blacks and 18 percent for whites, with the percentage remaining similar today.

Tatum said Black Lives Matter—a quasi-Marxist organization that has become a household name, is endorsed by major corporations, and has raised millions of dollars—has done nothing to uplift the black community, because that is not truly its goal.

“But to the unsuspecting person that seems very bizarre that the founding of Black Lives Matter is to do the very thing that has damaged the black community the most. And that’s to believe in the absence of the father, they want to destroy the nuclear family.”

“I’m just here to be a messenger of things that I know and I have experienced and researched. But I think it’s invaluable for us to empower ourselves with knowledge. And everybody should do their own research to prove that whatever you hear from me, from anybody else, is true and it’s factual.”