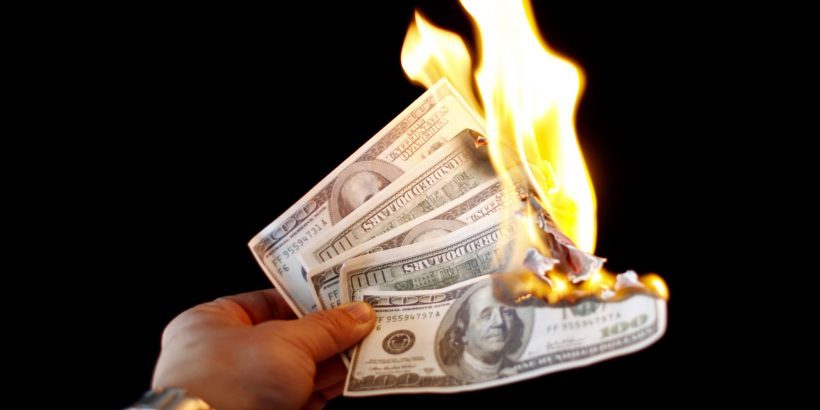 Joe Biden, who plays Mr. Everyman on TV, in real life has an amazing history of stiffing the little guy.

He touts a federal $15-an-hour minimum wage and raves about wage gains during his administration:

“When it comes to the economy we’re building, rising wages aren’t a bug, they’re a feature,” he said.

“Many job seekers won’t even consider jobs that pay less than $15 anymore. For years, low-paid workers fought to make at least that much. Now it has effectively become the new baseline.”
#WorkerPower #BidenBoom https://t.co/gBQzC1bwVP

Turns out all those wage gains are gone.

Rising prices on everything from groceries to gasoline have eaten away the wage gains workers have seen since the start of the year, leaving most Americans earning less than they were before the pandemic began and derailing the White House’s argument that paychecks have grown under President Joe Biden’s tenure.

Prices climbed 0.5 percent over the month from June to July, a slower pace than in recent months but still sizable enough that it outpaced the healthy wage gains workers across the income spectrum have received. As a result, real earnings decreased 0.1 percent over the month, government data shows.

The consumer price index, a key measure of inflation, rose 5.4 percent in July from the same month last year as the cost of meat and dairy products, hotel room stays, restaurant dinners and other items increased, according to Labor Department data released Wednesday. It’s the second straight month of year-over-year increases at that level, the biggest jump since 2008.

The data marks the latest month in which rising prices have overshadowed wage gains, all but erasing the impact of pay hikes that have been celebrated from Biden on down as a sign of workers’ new bargaining power and of the robustness of the economic recovery.

How exactly does that happen?  Simple: It’s government spending, with all the government debt that comes of it.  With Biden’s monster $1.2-trillion infrastructure stimulus package in the works, and its even bigger $3.5-trillion “Bernie” budget resolution now in the pipeline, it’s set to get even worse.  And Biden has spent a hell of a lot already.  Economist Stephen Moore has a summary:

Where does the money come from?  It’s certainly not in some bank account now.  It’s coming the Hugo Chávez way, which is to say through the money-printing press.

Here’s a simple, basic, Economics 101 cause-effect relationship explainer from the ATB bank site in Canada.  Substitute “Canada” with “Federal Reserve” (or U.S.) in the storyline, and the picture is perfectly clear:

When the average consumer is looking to purchase a home or vehicle, often they turn to a commercial bank for lending in the form of a mortgage, line of credit or loan. When the Government of Canada is looking for lending, they turn to the Bank of Canada, which issues debt on their behalf.

To do this, the Bank of Canada will hold an auction of bonds to raise funding from different players in financial markets such as brokers, private banks and dealers. Later, investors will purchase these bonds from these players to hold in their investment account. A Government of Canada bond will pay interest to the investor (as compensation for lending them money) and at maturity, the principal is returned to the investor. At this time they can choose to buy another bond or invest otherwise.

Aside from borrowing, the Canadian government can also use other tools such as adjusting corporate and personal income tax rates to obtain funding. Compared to increased borrowing, increasing tax rates is a much greater bureaucratic process and is also typically a far less popular option among the general public.

Yes, Biden’s got some tax hikes on “the rich” in the works, but the big part of the ongoing inflation is the already huge and set-to-grow government debt.  That’s remarkable in a non-wartime setting, and definitely a problem if the U.S. ever runs into a real emergency, as Sen. Joe Manchin noted.  It’s just Joe being Joe, running the government presses.  Debt is closing in on 100% of GDP, as the Canadian bank notes, and default is more likely, meaning investors will demand higher yields, and the cost to the government will just keep going up.

So farewell to worker wage gains.  The Politico report shows that they’ve already been eaten away.  Workers now make less than they did, and can buy way less than before, even though their salaries claim they have more.

(Compare and contrast, by the way, with the significant worker wage gains during the Trump administration, which came the natural way, through productivity gains.  Workers gained in wages, and actually got to keep them, having no significant inflation.)

Now it’s the era of Joe Biden, and things are considerably uglier.  Biden and the left that controls him are continuously talking about “wage shortages,” “poverty alleviation,” and raising the minimum wage as some kind of desirable solution, but it’s completely ridiculous.  Every time they raise the minimum wage, their compulsive government spending snaps the wage gains away.  Inflation is all over, and now it’s set to get worse.

It’s socialism, and like all socialist schemes, it’s been tried before.  Ever wondered why Cuban workers make $20 a month?  Or better still, let’s look at Venezuela.  Here’s an editorial about it written by a former colleague at Investor’s Business Daily:

Faced with a collapsing economy and hyperinflation from his socialist policies, Venezuelan strong man Nicolas Maduro announced an immediate increase in the minimum wage of 3,500%. That wasn’t the first: Since 2013, Maduro has raised the official minimum wage 24 times.

You’d think workers would have caught up by now, right? After all, isn’t that what a minimum wage is about?

Sadly, you’d be wrong. The 60-fold increase in worker pay has led to mass layoffs, with 40% of Venezuela’s stores forced to shut their doors. The reason: While workers get an enormous inflated boost in their pay, businesses are being forced to charge last month’s prices.

Combine that with Venezuela’s monster rise in government spending — see here — and the minimum wage hikes have been nonsense.  The inflation-consumed country, in fact, is a nightmare.

Biden is not only calling for a $15-an-hour minimum wage hike; he’s also blaming oil companies for higher prices instead of his own tax-and-spend-to-the-moon policies.  His sidekick, Kamala Harris, remains clueless, apparently believing that Americans don’t know what inflation is.

Inflation, in fact, is a regressive tax, with terrible consequences to the poor, to those who save, and certainly the wages of the working class.  Their wage gains are already gone.

Biden made it, as he makes his cronies rich in the big new government spending plans.  He’s going straight down Hugo Chávez Way, and he thinks he’ll get a different result.  Like Hugo, he claims that life will be better with wage hikes and big spending programs to get “poverty eradicated.”  Life will be better; the economy will boom.  Biden’s war with economics is not one he’s going to win, any more than oil-cash-sozzled Venezuela’s Chávez ever did.  Biden’s promises to the little guy about higher wage gains are starting to ring very hollow.  It’s the false promises of socialism, and now it’s coming here.