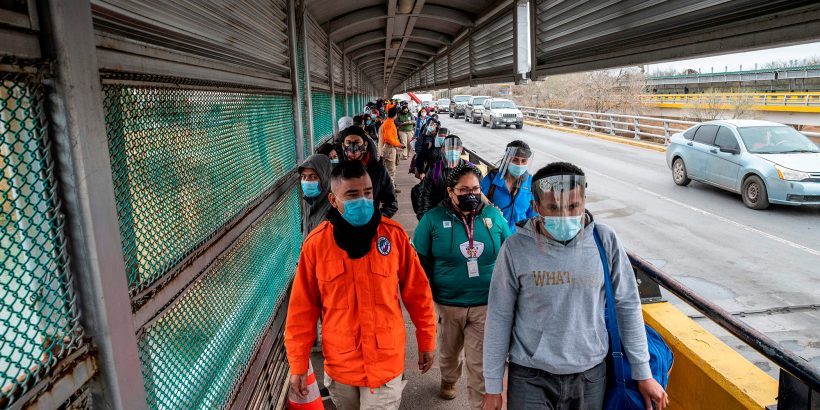 Four in 10 illegal immigrants released in a city last week near the U.S.-Mexico border tested positive for COVID-19, according to officials there.

“That was very high,” Pete Saenz, the mayor of Laredo, told The Washington Examiner.

Dr. Victor Trevino, the Laredo health authority, confirmed the numbers with the paper.

Officials in Laredo, a Texas city that is located across the Rio Grande from Nuevo Laredo, Mexico, did not return requests for comment, but they offered a similar positivity percentage in a federal lawsuit last month.

Officials said in the complaint that Customs and Border Protection officials have been dropping off immigrants in the city despite large numbers of them testing positive for COVID-19, the CCP (Chinese Communist Party) virus.

The surge in illegal immigrants crossing the border amid the COVID-19 pandemic presents a safety concern, Republican lawmakers and others argue.

“Americans are sick and tired of endless mandates while watching COVID-19 cases surge at the border,” Rep. Andy Biggs (R-Ariz.) said on Twitter this week.

The Laredo case numbers are the highest recorded along the border, but officials in McAllen said last week that out of 7,000 immigrants released by federal officers into the city the week before, 1,500 tested positive for COVID-19.

“Lately we’ve been getting about 1,800 immigrants a day,” McAllen Mayor Javier Villalobos said in a video arguing against unchecked immigration. “Then, coupled with the fact that 15 percent of the immigrants have COVID, have caused substantial problems to our great city of McAllen,” he added.

Don McLaughlin, the mayor of Uvalde, told The Epoch Times this week that immigrants are probably responsible for 15 to 20 percent of COVID-19 cases in the community, citing the last survey officials in the border city completed.

“The COVID deal is getting really serious again, and really bad. And again, here we are on the southern border. ‘Just come on in.’ I mean, it just doesn’t make sense,” he said.

A Border Patrol agent who declined to be named in order to avoid repercussions told The Epoch Times that the agency was pushing many immigrants to Laredo, which triggered a lawsuit from the city against the Biden administration.

Laredo officials said in a complaint that Border Patrol planned to bus 250 to 350 immigrants a day into the city.

“Not every apprehended person is tested for COVID-19 as part of Defendants’ processing procedure before they are legally released from immigration custody and into the general public. Therefore, many, if not most, go untested and risk spreading the disease to other[s] in their group and the general public after their release,” they said.

Of 139 confirmed COVID-19 cases in Laredo as of July 11, 63 were among immigrants or detainees.

A Customs and Border Protection (CBP) spokesperson last month did not answer directly when asked about COVID-positive immigrants being released in La Joya, another Texas border city.

On Thursday, a spokesperson told The Epoch Times via email that “the border is not open” and that the agency is operating under Center for Disease Control and Prevention (CDC) guidelines for the pandemic.

“CBP is making every effort to remain within CDC guidelines and mitigate long periods of processing and holding to minimize potential exposure to our workforce, those in custody, and the community.  Once processing is complete, these individuals will be expeditiously transferred out of CBP custody,” the spokesperson said.

The lawsuit was dismissed on Monday after the parties entered an agreement.

Saenz told outlets that the agreement includes the city not accepting immigrants who have been dropped off by Border Patrol. Instead, the city is hiring a charter bus company to immediately bus them to other cities, including Austin and Houston.

“We entered into an understanding that we would drop the lawsuit, which we did, and then Border Patrol would deliver these migrants, about 200 or so per day, to a city facility that we leased and then we, in turn as a city retained a bussing company to transport these migrants farther north here in Texas,” Saenz told Border Report.

Charlotte Cuthbertson contributed to this report.

The Texas Senate approved an election overhaul measure on Aug. 12 after a Democrat senator ended a 15-hour filibuster.

The Republican-controlled body passed Senate Bill 1 on an 18–11 vote just moments after state Sen. Carol Alvarado, a Democrat, stopped speaking at around 9 a.m.

Alvarado had been standing on the floor since just before 6 p.m. on Aug. 11.

Authored by Republican state Sen. Bryan Hughes, the bill would tighten up voter roll maintenance, expand early voting hours, and force employers to give workers time off to vote, whether on Election Day or on other days.

“We talk about easy to vote and hard to cheat, and that’s what the bill’s about,” Hughes told colleagues in Austin, Texas.

“Senate Bill 1 slowly, but surely, chips away at our democracy. It adds, rather than removes, barriers for Texas seniors, persons with disabilities, African Americans, Asian, and Latino voters from the political process,” she said.

Filibuster rules prevented Alvarado from taking food or water or sitting or leaning overnight. She didn’t speak continuously, with both Republicans and Democrats taking turns discussing provisions in the legislative proposal.

The bill would be sent to the Texas House of Representatives, but the lower chamber isn’t in session because it lacks a quorum.

Democrats in the state House fled to Washington last month.

The Texas Supreme Court ruled on Aug. 10 that Republicans could legally move to compel their colleagues from across the aisle to return to Austin, a ruling cheered by Gov. Greg Abbott. Texas House Speaker Dade Phelan then signed civil arrest warrants that were delivered to the offices of the Democrats by the sergeant-at-arms.

No Democrats have been arrested and Texas authorities haven’t shown any inclination so far to track down the missing lawmakers. It isn’t clear when the stalemate could end.

While Republicans control both legislative chambers in Texas, as well as the governor’s mansion, two-thirds of lawmakers must be present to constitute a quorum. Republicans only hold 82 seats in the 150-seat lower chamber.

Some Democrats are saying that they won’t return to the Capitol voluntarily.

“There’s a warrant out for my arrest because I’m standing up for your right to vote. I won’t back down,” Democrat state Rep. Michelle Beckley wrote on Twitter.