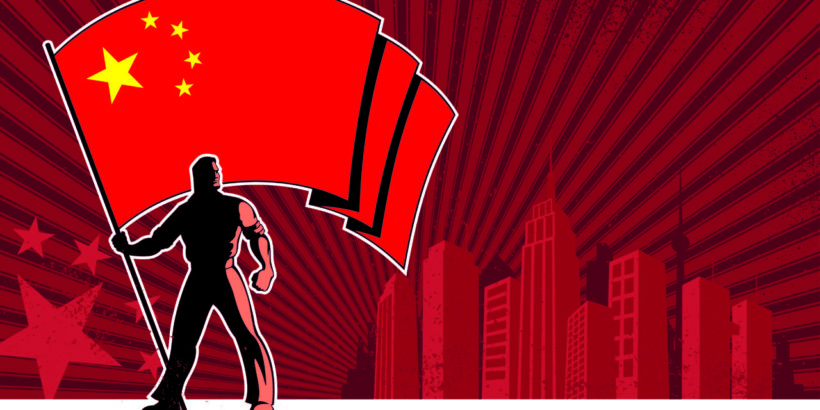 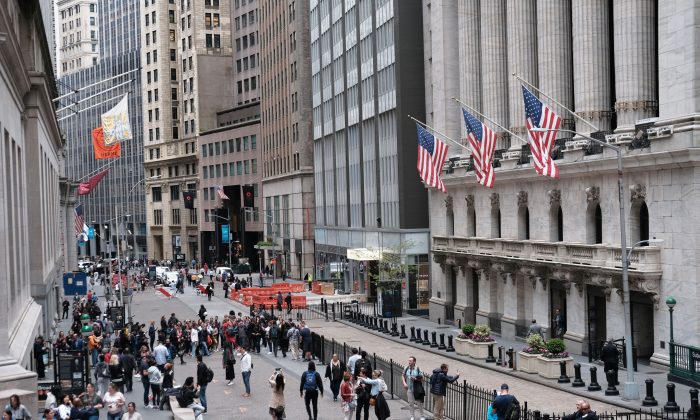 People walk outside of the New York stock Exchange (NYSE) in New York City on May 6, 2019. (Spencer Platt/Getty Images)

Since March 2020, New York has become the epicenter of the pandemic in the United States.

The Chinese regime’s coverup and mishandling of the outbreak has highlighted Beijing’s deceptive tactics.

It has also prompted some countries and institutions to re-examine their relationship with Beijing.

Will New York State do the same, given its close political ties with Beijing?

New York has always been a highly coveted target to conquer for the Chinese Communist Party (CCP). From finance to real estate, entertainment to media, Ivy League institutions to school boards, state government to community organizations, the CCP has been using a whole-of-country approach to extend its influence into every fabric of society.

Below, we take a look at Beijing’s influence at all levels of government in New York State.

Investment and Cooperation on All Levels

The Canadian National Security and Intelligence Committee of Parliamentarians Annual Report released in 2019 said: “With deep coffers and the help of Western enablers, the CCP uses money, rather than communist ideology, as a powerful source of influence, creating parasitic relationships of long-term dependence.”

By the end of 2015, Chinese businesses had made a total investment of $9.5 billion in 95 projects across the state of New York. By the end of 2016, the numbers rose to $15.5 billion in roughly 120 projects across the state. China became New York State’s biggest trading partner outside of North America, with China as the top export destination for the state.

In addition, there were 10 pairs of sister cities between the State of New York and China by 2015.

Such a relationship is not possible without the “Western enablers,” who are pro-Beijing groups and U.S.-based Beijing-funded businesses. For example:

Since 2017, there has been increasing international scrutiny of CCP’s industrial espionage; investments overseas, including its Belt and Road projects; military build-up in the South China Sea; and unfair trade practices.

All that drove Beijing to elevate its efforts to boost its image overseas, especially in New York State.

In November 2018, then-Chinese Ambassador to Zimbabwe, Huang Ping, was unexpectedly transferred to the Chinese consulate in New York to become Consul General.

South China Morning Post quoted Robert Kapp, former president of the U.S.-China Business Council, who said the move was to counter a more aggressive stance toward Beijing since President Donald Trump took office. “This is a time of crisis in U.S.-China relations,” Kapp said.

Chairman Xu Chen pledged CGCC’s commitment to “work together with the Consul General to bring more Chinese companies to the ten eastern states, and to bring about a new era in Sino-U.S. trade and commerce.”

In March 2019, Huang met with more than a dozen lawmakers in Albany and visited several city council offices.

In return, a delegation of state lawmakers, led by Toby A. Stavisky, vice chair of the Senate Majority Conference, visited Huang at the New York Chinese consulate in May. Huang asked the legislature to “handle the sensitive matters appropriately,” according to a post on the Chinese consulate website.

Such diplomacy resulted in the “China Day” New York Senate resolution, the first in the nation to commemorate October 1, the 70th anniversary of the CCP’s takeover of China.

On June 18, 2019, representatives of the Chinese consulate and pro-Beijing organizations were invited to witness the passing of the resolution on the New York Senate floor.

These groups hosted a celebration of the “China Day Resolution” in Brooklyn on July 20, 2019. State senators, assembly members, and city council members attended. Senator James Sanders was the sponsor of the resolution.

Sanders said that it was his wish that through the resolution, New York State will become the leader in the U.S. cooperation with China, according to a post about the event on the BRACE website.

The chairman of BRACE, John S. Chan, told pro-Beijing newspaper China Press that the group has been working for years on the resolution.

The lawmakers were welcomed by top officials in Beijing city’s rubber-stamp legislature.

On Sept. 15, 2019, the New York Economic Relations Friendship Delegation sponsored by BRACE and the American Chinese Commerce Association Hong Kong once again embarked on a two-week trip to China. The delegation, led by Sen. Sanders, visited eight cities. According to a China Press report, they discussed cooperation between New York State and China in areas such as commerce, education, and internet technology.

Michael Bloomberg, mayor of New York City from 2002 to 2013, is a supporter of the Belt and Road Initiative (BRI, also known as One Belt, One Road) and other China interests.

In his speech, Bloomberg praised China’s climate change initiatives, saying, “China does deserve a lot of credit for its leadership which sets a strong example for other countries.”

On the financial front, Bloomberg Philanthropies hosted the first high level U.S.-China business forum in April 2017. He said, “Over the last year (2016), I’ve been chairing a working group to help make it possible to trade and clear the RMB (Chinese currency) in the U.S.”

He spoke of milestones in China’s finance sector cooperation with the United States. “Last year the Bank of China New York branch became the first clearing bank in the U.S. The first American CD in RMB was issued. The first U.S. based license to trade Chinese stocks and bonds was issued. In March, Bloomberg became the first financial data provider to provide Chinese bonds and fixed income indexes.”

He went on to talk about BRI: “Investing in infrastructure is the best way to spur economic growth. Our company has hosted a series of events around the world called, ‘China navigating the new silk road.’ This year, it was held in Geneva, Hong Kong, Frankfurt, London, and attended by the Chinese ambassador in the country.”

Though the United States is not a participant in the BRI, China has many construction investments in the country.

CCA is a subsidiary of the state-owned China State Construction Engineering Corporation. An article on the website of the China General Chamber of Commerce (CGCC) describes CCA as “shouldering the major responsibility of the globalization of Chinese construction assets, as well as an active enabler of the Belt and Road strategy.”

Huang told CCA President Yuan Ning, “Despite the difficulties caused by the trade war, CCA should continue taking advantage of the aging infrastructure in the U.S. to expand your market.”

CCA has close contacts with the Chinese consulate and local pro-Beijing groups. In 2017, CCA’s CEO Yuan Ning received a “Blue Cloud” award from the China Institute for “his significant contributions” to the U.S.-China relationship.

For two terms, Yuan was the chairman of CGCC. Cui Tiankai, Ambassador to the United States praised Yuan for “building up the most important bridge—CGCC—a perfect platform for China-U.S. trade and commerce.”

The other notable recipient of the Blue Cloud award in 2017 was New York State Governor Andrew Cuomo.

Some of the projects CCA has completed in New York include the replacement of the first railroad bridge of the LIRR (Long Island Rail Road) expansion project. New York Lieutenant Governor Kathy Hochul visited the project team during construction.

CCA also built a luxury rental tower by the Hudson River in the city of Yonkers. Yuan, Consul General Huang, and Yonkers Mayor Mike Spano were present at the ribbon-cutting ceremony in May 2019. Huang took the opportunity to advocate cooperation between the two countries: “This project further demonstrated that by cooperating together we can create a win-win result,” he said.

In June 2019, officials from Yonkers led by mayor Spano and deputy mayor Jim Cavanaugh visited the Chinese Consulate in New York, “to further promote and enhance the trade relations and cultural communication between China and the City of Yonkers. China Construction America and other China-invested enterprises were also encouraged to participate in local projects and further contribute to the healthy development of China-U.S. relationship,” the New York Chinese consulate wrote on its website.

On March 7, 2017, the NY State Senate and Assembly both adopted a resolution to welcome then-Consul General Zhang Qiyue and CGCC members.

Before CCP leader Xi Jinping’s planned visit to the United States in September 2015, the New York State Senate passed two resolutions—one to welcome Xi to the United States; and the other to “reaffirm the commitment to strengthen the ties between the State of New York and the People’s Republic of China.” The State Assembly also passed a similar resolution.

Events to Promote Cooperation With Beijing

In July 2017, a forum on trade and investment between China and New York state was held in the city of Buffalo. Zhang, New York State Economic Development executive VP Jeff Janiszewski, and Buffalo mayor Byron Brown attended the meeting.

During the National Governors Association meeting in early February 2020, U.S. Secretary of State Mike Pompeo said: “The Chinese government has been methodical in the way it’s analyzed our system … it’s assessed our vulnerabilities and it’s decided to exploit our freedoms, to gain an advantage over us at the federal level, the state level and the local level.”

“In fact, I’d be surprised if most of you in the audience had not been lobbied by the Chinese Communist Party directly.”

Pompeo warned state governors to be wary of China’s infiltration, citing a letter from a diplomat at the Chinese consulate in New York to the speaker of an unnamed state legislature, advising that U.S. officials refrain from independent interaction with Taiwan.

“You had a diplomat from China, assigned here to the United States, a representative of the Chinese Communist Party, in New York City, sending a letter urging that an American elected official shouldn’t exercise his right to freedom of speech,” Pompeo explained.

Epicenter of the CCP Virus

On Jan. 22, Consul General Huang rang the closing bell at NASDAQ to ring in the Chinese New Year. At the same time, China’s Wuhan city went into full lockdown to curb the spread of the CCP virus, also known as the novel coronavirus. Yet the world did not receive enough warning about the severity of the outbreak in China, nor the potential spread of the virus via human-to-human transmission. Life largely went on as usual.

On March 1, New York Governor Cuomo confirmed the first CCP virus case in the state. At the time, over 70 cases had been reported in the United States, with most in the West Coast. However, over the next few weeks, New York State became the epicenter of the outbreak in the United States and New York City had been the hardest hit. To date, there are over 353,000 confirmed cases in the state, with over 27,000 deaths.

As the virus spread to other countries, the CCP quickly switched to “face mask diplomacy,” portraying itself as the savior of the world by selling often defective PPE (personal protective equipment) to countries of strategic importance. Moreover, it expected gratitude from the world.

The Chinese Consulate in New York teamed up with Jack Ma, founder of Chinese tech giant Alibaba, and donated 1,000 ventilators to New York hospitals. Cuomo praised the Chinese regime for its help. In April, the State Senate passed a resolution to express “sincere gratitude to the Chinese government for their thoughtful gift.