The American People Are Ready for Justice and Beyond Fed Up Watching Many Toss Our Constitution and Laws Aside. If Anyone Has Been Testing to See Just How Far, “We the People” Can Be Pushed, They are About to Find Out.

American’s wholeheartedly agreed with caution and necessary measures to keep everyone safe.  But, then as usual, the overreach began.

POTUS Knows Our Patience Has Been Spent.  Especially With the COVID – 19 Quarantine and Closing of Businesses. 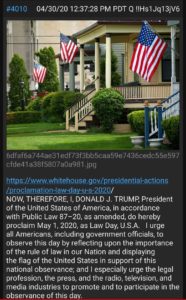 This reminder in and of itself wouldn’t be of any particular serious mention, except Q rarely does anything without a purpose.

True to form, that first post on 4/30 was the beginning of a blizzard of Q drops that gave an abundance of information for Anons to consider. 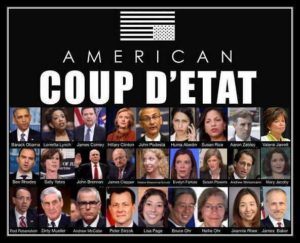 Especially those giving strong hints of what is to come, and asking many questions of We the People.

We are called to use our Critical Thinking skills and research abilities.

One of the most telling IMHO, was the Meme about the American Coup D’Etat. This brazen photo clearly suggested to me what is coming soon, especially because of the timing.

The President has also given many straight forward statements that he feels General Flynn will be exonerated and would consider bringing him back on staff at that point.

Then other drops gave a laundry list of delays and pushed back dates that the Democrat Party has been doing on a continual basis. Another one talked about Social Media censoring and how the CEO’s of some of our largest, and well known are working together against us, at the behest of those, “We the People” elected.

Q made the statement (#4024), “Sometimes you can’t TELL the public the truth. YOU MUST SHOW THEM.”

A Deeply entrenched enemy who controls the vast majority of communications is only defeated by ………….

Is it time now?

What Was Q Ultimately Saying?

Q and many statements of our President have been saying a great deal, so what is next and how FAST will the indictments be served to the MANY on deck. When will we see justice?

VERY SOON because We the People  are at the end of our patience.

Watch the attached You Tube Video between Ron Ask (C-VINE Attorney) and myself as we discuss all these aspects.

Also, if you would like to see the recent Q drops, it would be worth your time to look them over directly at Qmap.pub

Get involved somehow, educate yourself and speak with others who are just as invested as you are in knowing what is happening.

In the meantime… here is a copy of the Law Day Proclamation (E0):

BY THE PRESIDENT OF THE UNITED STATES OF AMERICA

Today, we celebrate Law Day, as we have since President Dwight D. Eisenhower first commemorated it in 1958, and reflect upon our great heritage of liberty, justice, and equality.  Our Founders risked their lives, fortunes, and sacred honor in defense of these values.  More than 240 years ago, they set pen to paper and declared to the world “that all men are created equal, that they are endowed by their Creator with certain unalienable Rights, that among these are Life, Liberty and the pursuit of Happiness.”  The Declaration of Independence thus set our Nation on its revolutionary and transformative path to protecting people’s inherent, individual rights and liberties from the tyranny of an elite few who might use the powers of the state to trample upon them.

To protect the values for which they fought, the Framers of our Constitution created a government of limited and separated powers that enables the rule of law to prevail over the whims of government officials.  As the great Justice Antonin Scalia frequently observed, every dictatorship has a bill of rights, but paper rights alone will not preserve liberty.  It is our Constitution’s clear division of the sovereign’s power    vesting the power to create laws in the Congress, the power to execute laws in the President, and the power to interpret laws in an independent judiciary    that enables us to remain free and in control of our government.

Recognizing, as President Ronald Reagan did, that “freedom is never more than one generation away from extinction,” today we pay tribute to the government of laws, and not of men, that forms the foundation of our freedom.  Therefore, on this Law Day, we rededicate ourselves to the rule of law, to the separation of powers, and, in the words of President Abraham Lincoln’s Gettysburg Address, to the preservation of “government of the people, by the people, for the people.”

NOW, THEREFORE, I, DONALD J. TRUMP, President of the United States of America, in accordance with Public Law 87–20, as amended, do hereby proclaim May 1, 2017, as Law Day, U.S.A.  I urge all Americans, including government officials, to observe this day by reflecting upon the importance of the rule of law in our Nation and displaying the flag of the United States in support of this national observance.

IN WITNESS WHEREOF, I have hereunto set my hand this
first day of May, in the year of our Lord two thousand seventeen, and of the Independence of the United States of America the two hundred and forty-first.