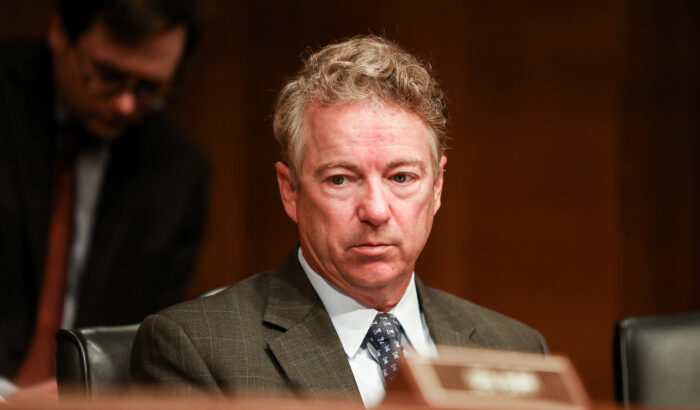 Photo:  Sen. Rand Paul (R-Ky.) at a Senate hearing regarding the coronavirus in Washington on March 3, 2020. (Charlotte Cuthbertson/The Epoch Times)

By Jack Phillips
March 22, 2020
Sen. Rand Paul (R-Ky.) tested positive for the CCP virus and is currently being quarantined, his office announced on Sunday afternoon.

The 57-year-old junior Kentucky senator is “feeling fine and is in quarantine. He is asymptomatic and was tested out of an abundance of caution due to his extensive travel and events. He was not aware of any direct contact with any infected person,” his office wrote in a statement.

With the positive test, Paul, who unsuccessfully ran for president in 2016, is perhaps the highest-profile official in the United States to have contracted the virus.

Senator Rand Paul has tested positive for COVID-19. He is feeling fine and is in quarantine. He is asymptomatic and was tested out of an abundance of caution due to his extensive travel and events. He was not aware of any direct contact with any infected person.

He is planning on returning to the Senate after his quarantine is over, according to a Twitter post. It’s not clear when that will be.

Paul will still “work for the people of Kentucky at this difficult time,” his office said in a Twitter post. “Ten days ago, our D.C. office began operating remotely, hence virtually no staff has had contact with Senator Rand Paul.”

Over the past week or so, Reps. Mario Diaz-Balart (R-Fla.) and Ben McAdams (D-Utah) have also tested positive for the CCP virus, while a staffer working for Vice President Mike Pence was confirmed to have contracted it. Pence and his wife were tested for the virus, and the results came back negative on Saturday.

“Neither President Trump nor Vice President Pence had close contact with the individual. Further contact tracing is being conducted in accordance with CDC guidelines,” Pence spokeswoman Katie Miller said in a statement.

Earlier in the month, President Donald Trump tested negative, according to his physician. His daughter, Ivanka, self-quarantined at home before her COVID-19 results came back negative, allowing her to work in the White House on Friday.

More than a dozen lawmakers have entered voluntary self-quarantine amid the pandemic, and it’s likely that more will be infected. Speaker Nancy Pelosi’s (D-Calif.) office said last week that Congress will be “the last to leave.”

Brett Giroir, a four-star admiral in the U.S. Public Health Service Commissioned Corps who serves as the Assistant Secretary for Health under the Trump administration, recently told reporters that testing should be prioritized for front-line workers dealing with the pandemic. Those with symptoms should also be tested, he said.

“Clearly, everyone across the country should understand that those hospitalized or in an ICU are a priority for testing. Symptomatic health care workers—for obvious reasons we want to make sure that their health is preserved and that they are not going to spread to those that may be seriously ill,” Giroir said.