There’s A New Sheriff In Town, And He Follows The Rule Of Law 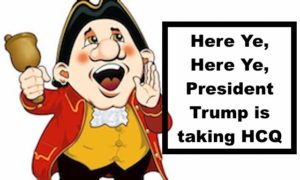 The Press went crazy! They do not want this information coming out, but Trump is not giving them the option anymore. It’s out there. With HCQ there is no more fear.

Sometimes you have to show the people. This is what Trump is doing with HCQ. It has been around for decades treating lupus, malaria, now Covid-19, and most likely the flu. Trump has been taking it for nearly two weeks. Nobody can say it is harmful anymore. Trump is always steps ahead!

They told Trump we needed ventilators, masks, Covid tests, etc. Trump said, “OK.” Now, we find we have an over abundance of these things and nobody needs them anymore. What was the DS agenda? The Netherlands projections stated the chance of death with covid perfectly aligns with the regular flu. Numbers are declining. Was this extended shutdown a hoax?

Obama is upset because this is not how their plan was supposed to go. The shutdown was supposed to destroy the economy, take out Trump, swap out Biden and the declass was not supposed to be  released by Ric Grenell. When someone gets a warrant to spy on someone, it’s called surveillance. When someone is surveilling someone without a warrant, it’s spying. Schiff and his team did not have a warrant.  Everything has boomeranged and their plan is falling apart. The White Hats are cutting though all the baloney!

Coalition of 116 countries back Australia’s push for independent coronavirus inquiry into China. All these countries want to know how China had so much power to shut the world down. Who was behind this, funding it all?

People across the country are opening up in spite of the governors ‘orders.’ Gyms, salons, churches, restaurants, etc. and even Elon Musk has had enough of the shutdown. Businesses are done being closed and people are rising up!

Today, Bill Barr said in a press release that he has not seen any evidence, “as of today,” where he could bring charges against Obama. It’s important to key in on the phrase, “as of today.” It may not be criminal charges, but rather military charges.

When it comes to United States citizens, even though we have rights under the US constitution, it does not grant us rights to collaborate with the enemy. There is a difference between Criminal law and Military Law.  When crimes against our country have to do with colluding with a foreign enemy, Military Law comes in to play. Biden, Clinton, Obama and others, understand this could seal their fate and they are panicked.