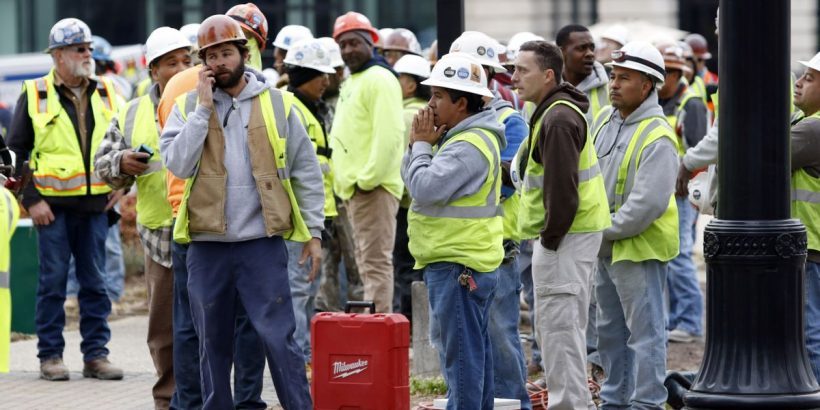 Democrat legislators fear Latino voters will blame them for the wave of migrants who are accepting the Democrats’ offer to share Americans’ jobs, healthcare, schools, and citizenship, according to a Politico report.

“The way we’re doing it right now is catastrophic and is a recipe for disaster in the middle of a pandemic,” said Rep. Vicente Gonzalez, one of the three Texas Democrats who represents part of the border most affected by spikes in migrant arrests and arrivals.

“Our party should be concerned. If we go off the rails, it’s going to be bad for us,” Gonzalez said. “Biden is going to be dealing with a minority in Congress if he continues down some of these paths.”

Numerous polls show that American Latinos oppose mass migration because migration threatens their jobs, wages, neighborhoods, and schools. In April 2020, 69 percent of Hispanics said yes when they were asked by a Washington Post pollster: “Would you support … temporarily blocking nearly all immigration into the United States during the coronavirus outbreak?” Just 30 percent of Hispanics opposed the shutdown.

The focus for them is on jobs, the economy, the raise I got at work, the cost of health care and if I can take a loan out for my business. We gotta be careful that we don’t give the impression that we have open borders because otherwise the numbers are going to start going up. And surely enough, we’re starting to see numbers go up.

The Wall Street Journal reported Feb. 18 evidence of a thirteenfold-increase in the number of migrants being released:

DEL RIO, Texas—Throughout the pandemic, this border city’s Val Verde Border Humanitarian Coalition has typically assisted about 25 migrants a week who enter the U.S. illegally with their families and seek asylum.

In the last week of January, 341 migrants passed through its center, quickly overtaxing the organization’s resources and leaving it nearly out of supplies, said its director of operations, Tiffany Burrow. Del Rio briefly turned its civic center into an emergency shelter last month to help 50 people who had to wait overnight for buses to depart the border city.

Texas employers already use many foreign workers, including legal immigrants, illegals, and foreign contract workers — such as H-1Bs and OPTs — instead of paying decent wages to Americans. For example, one pro-migration group, the American Immigration Council, reported in 2020 that one-quarter of all Texas workers were born outside the United States and that “undocumented immigrants comprised 8 percent of Texas’s workforce in 2016.”

The result is widespread poverty in Texas, especially outside the major cities. In March 2020, the Bureau of Labor Standards reported

When all 254 counties in Texas were considered, all but 32 had wages below the national average. … The counties with the highest average weekly wages were concentrated around the larger metropolitan areas of Dallas, Houston, and Austin, as well as the smaller areas of Midland, Odessa, and Amarillo. Lower-paying counties tended to be located in the agricultural areas of central Texas, the Texas Panhandle, and along the Texas-Mexico border.

ZAPATA, Texas — Of all the results from the November 3 election, few drew as much attention from national political observers as what happened in a quiet county on the banks of the Rio Grande. Donald Trump became the first Republican presidential candidate to win Zapata County’s vote in a hundred years. But it wasn’t its turn from a deep-blue history that seemed to be the source of such fascination but rather that, according to the census, more than 94 percent of Zapata’s population is Hispanic or Latino.

Zapata (population less than 15,000) was the only county in South Texas that flipped red, but it was by no means an anomaly: To the north, in more than 95-percent Hispanic Webb County, Republicans doubled their turnout. To the south, Starr County, which is more than 96-percent Hispanic, experienced the single biggest tilt right of any place in the country; Republicans gained by 55 percentage points compared with 2016. The results across a region that most politicos ignored in their preelection forecasts ended up helping to dash any hopes Democrats had of taking Texas.

Ross Barrera, a retired U.S. Army colonel and chair of the Starr County Republican Party, put it this way: “It’s the national media that uses ‘Latino.’ It bundles us up with Florida, Doral, Miami. But those places are different than South Texas, and South Texas is different than Los Angeles. Here, people don’t say we’re Mexican American. We say we’re Tejanos.”

For years, a wide variety of pollsters have shown deep and broad opposition to labor migration — or the hiring of temporary contract workers into the jobs sought by young U.S. graduates.

The deep public opposition is built on the widespread recognition that migration moves money from employees to employers, from families to investors, from young to old, from children to their parents, from homebuyers to real estate investors, and from the central states to the coastal states.

A plurality of Dem & liberal voters favor letting Fortune 500 CEOs import contract workers for the jobs needed by US college grads.
Everyone else opposes the outsourcing.
Swing voters oppose it by 66% to 22%.
GOP voters oppose it by 78% to 14% #H1B #OPThttps://t.co/2bLOfsw3bG