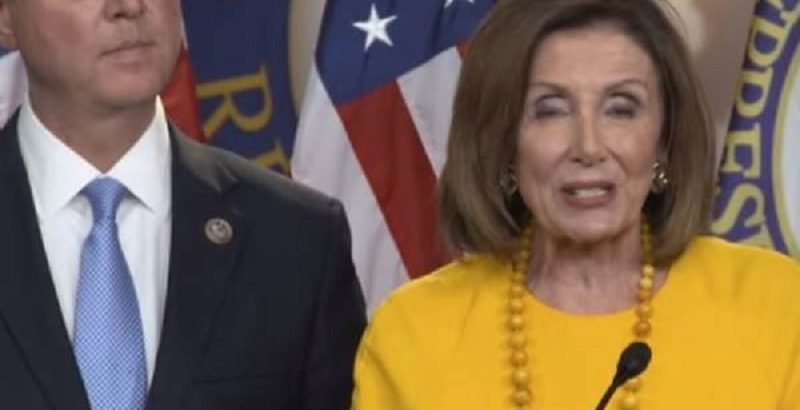 A week ago we reported that the Democrats’ plans to move forward with impeachment were insane.  Since that time their best efforts at producing a case for impeachment crumbled.

After numerous public testimonies over a 10 day period impeachment was no longer a legitimate option.  Today the only way the Democrats can save face with the radical left, without totally destroying their party and their chances for 2020, is to do some sort of censure on the President.

Many Democrats wanted to impeach President Trump before he was inaugurated. They have been dreaming of this moment for years. They hate President Trump. He is brash. He fights back. He ultimately and often makes them look like fools and he always wins.

After the most corrupt investigation and special counsel sham in US history was over, the Democrats had no crimes. They tried so hard. They falsified FISA documents. They spied on candidate and President Trump. They spied on and set up individuals near Trump (e.g. General Flynn, Manafort, Papadopoulos, Carter Page, Roger Stone, etc.). They had their ‘dream team’ on the Mueller Special Counsel and they even called themselves that. Anti-Trumpers, a Clinton Foundation attorney, the same group that released Hillary from any wrong doing, they were the perfect team to bring Trump down. But they couldn’t because he committed no crimes.

After weeks of secret interviews, leaks and more leaks and lies from Chairman Schiff and other Democrats on the Committee, the Democrats believe they have a case. But in reality all they have is questionable witnesses basing their comments on second hand information about the thoughts that President Trump may have had.  They have nothing.

In addition, the Democrats ignored Republican requests and prevented them from bringing in any witnesses. They interrupted their questions with the witnesses when they got too close to the truth. They won’t allow the whistleblower to be heard in spite of him starting the whole issue with a document with numerous falsehoods in it. But most alarming is the the Chairman of the Intel Committee, Adam Schiff, and his team worked with the whistleblower in the past, met with him before his complaint was filed, and met with the other witnesses before their testimonies were given.

The President committed no crime. The Bidens happened to be involved in shady dealings in the Ukraine as well as former Secretary of State John Kerry. Billions in funds from the US and IMF went missing. VP Biden at the time had a prosecutor fired who was looking into his son’s company in the Ukraine. VP Biden bragged about it later which may be his undoing. Americans know there is corruption in the Ukraine. It is the Ukraine! The fact that Obama’s team was there is very suspicious. President Trump has every right and even a duty to look into it.

The President is innocent and Schifty Schiff made no case for impeachment.  This is why all polling on this is going south.  Americans don’t like to see anyone railroaded.

2. The Democrats have no idea what will be uncovered or what will be presented in a Senate hearing and they have no control over the Republicans who are in charge of the Senate.  The Senate Hearings are a huge wild card.

President Trump alluded to this on FOX and Friends in an interview Friday morning. He said he wants a hearing. He said he is innocent. They have no case and he would like the Senate to bring in Adam Schiff himself among others. The President would like to see the whistleblower testify. This guy met with and worked with Schiff. How well will that go for Democrats when he stumbles and is found in contempt while implicating himself and Schifty Schiff in a coup?

The Senate can bring in Hunter Biden and Joe Biden.  The Senate can also bring in prosecutor Shokin who was forced from an investigation into Burisma by Biden.  They could ask Hunter what he knows about oil, gas, the Ukraine and what warranted his appointment to the Board of Burisma.

They could bring in specialists on the Clinton impeachment and have them summarize the options they gave the other party and the President when holding their impeachments.  It will be a train wreck for Democrats in the Senate and they will be sure to let Pelosi and Schiff know.

3. The IG’s FISA report is coming out in a week

No doubt that the Democrats have already seen this and built up their strategy to defend themselves but it will not be good for the Democrats and the Deep State. Americans already don’t trust DC and politicians. Soon the Democrats will be synonymous with the swamp in the mainstream.

President Trump says the report is shocking. He says that its the beginning of the parade of material on the greatest political scandal in US history. Former Reagan Attorney General Ed Meese believes that the FISA scandal is Obama’s Watergate –

Former Attorney General Ed Meese, who served under President Ronald Reagan, compared spying on the Trump campaign to the Watergate scandal in an exclusive interview with the Daily Caller.

Meese previewed the impending IG report on FISA abuse, which is expected to drop on Dec. 9. The report is expected to reach a conclusion as to whether intelligence agencies followed the correct processes when obtaining warrants to spy on members of the Trump campaign during the 2016 election. Meese debunked the idea that the IG report’s findings should be dismissed because the investigation occurred during the Trump administration, explaining that the IG’s investigations are independent.

Have the Democrats seriously considered how it is going to look when they are attempting to prosecute President Trump on a bogus, at best, ‘crime’ when the Obama appointed IG of the DOJ releases the FISA report showing much corruption and potential crimes related to the Obama gang before and after the 2016 election?

4. US Attorney Durham has a criminal investigation ongoing now that will indict Democrats and their Deep State gang, when indictments come forth.

John Durham is acting on behalf of AG Barr who wants to get to the bottom of the Russia collusion scandal. Why was candidate and President Trump spied on? Was it legit? If not, were crimes committed? If so, by whom?

We know that the Mueller team was a gang of Democrat attorneys and investigators, many of whom had just let Hillary Clinton off for no crimes in a crime riddled email investigation, and then the very same gang joined with Mueller to try and find crimes committed by candidate and President Trump.

This group targeted and indicted Trump associates who were spied on in the US and abroad. Many familiar with even a little about these events knows there were crimes committed.

The Democrats can’t control the Durham investigation as well. They don’t know what Durham is up to that we know of.  Most Americans are in the dark. We do know that Durham has been overseas with AG Barr to Italy related to the investigation. We know President Trump asked the Ukrainian leader to work with AG Barr and ultimately Durham. The Australian leader has committed assistance and it is likely that the UK may also be assisting Durham.

The results from this could and should be damning.  Many believe that if Durham does his job, he could uncover a coup. How will this look after the Democrats impeach an innocent man?

The House Democrats may impeach Trump but they might not as well.

The risk if all goes poorly for the Democrats is atomic. If the President is wrongfully impeached, and criminal actions by Schiff, the whistleblowers, the Bidens, Kerry and Obama are uncovered in Senate hearings, and the FISA report is totally damaging, and Durham starts arresting Democrats and the Deep State for their criminal acts, Americans will be outraged. This scenario could realistically be the end of the Democrat Party – something that some believe is long overdue.

The only way out for the Democrats is to end this suicidal attempt on their party and the USA.