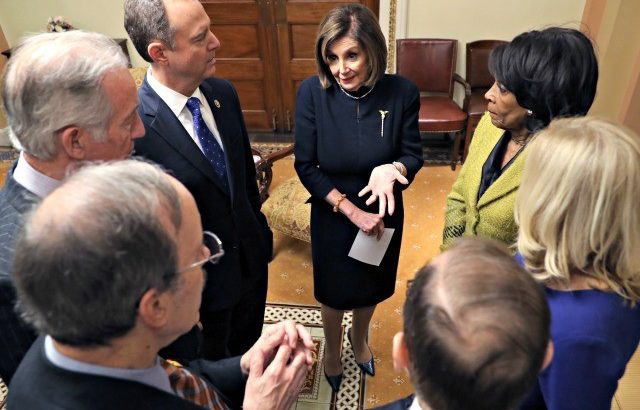 Q “CLEAN HOUSE”?  Maybe, maybe not… QAnons and fellow Patriots may be jumping out of their skin right now.

White Hat OPS are currently taking place under the “protective umbrella of the Coronavirus”  Only time will tell how this all plays out.

Aides say Speaker Nancy Pelosi and Majority Leader Steny Hoyer told House Democrats that the scheduled return will be delayed, with a firm return date still to be determined. “Hoyer said for sure not Monday, and he will update them about the rest of the week,” an aide told The Hill on Monday, adding that travel concerns may affect the decision. “This is all pending domestic travel situation too,” he said.

Meanwhile, Congress has already passed an $8.3 billion package aimed at addressing the most immediate healthcare concerns, but that is already proving well short of the resources needed. An economic stimulus was passed on Saturday, which Pelosi and Treasury Secretary Steven Mnuchin are already working to correct.

Senate Minority Leader Charles Schumer has also pitched a $750 billion fund for the hospital capacity expansion, bolstering Medicaid coverage, and strengthening unemployment insurance for anyone who loses their job due to the outbreak. House Transportation and Infrastructure Committee Chairman Peter DeFazio is focused on keeping the airlines solvent: A source told The Hill that DeFazio “talked about making sure any assistance to airlines puts workers first, and there should be conditions to ensure assistance isn’t used for CEOs or stock buybacks.”

It is unclear what effects this indefinite delay in their return will have on these efforts. All that is left to the American people is to hope their elected representatives are diligent enough to give them the same measure of safety.