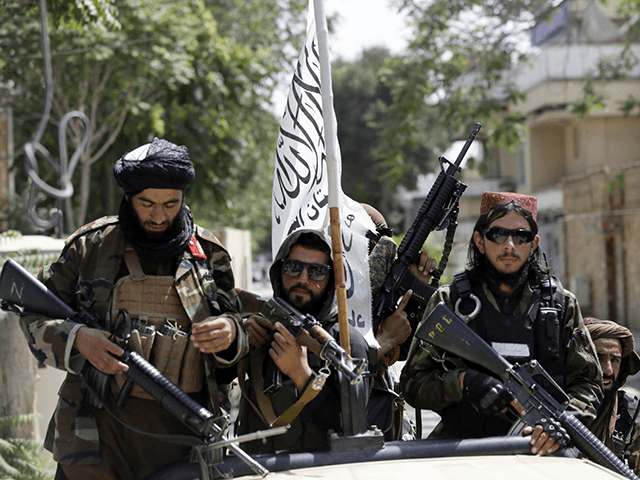 “The Afghanistan disaster of exactly one year ago was the most embarrassing, incompetent, and humiliating event in the history of the United States,” the former president posted to Truth Social. 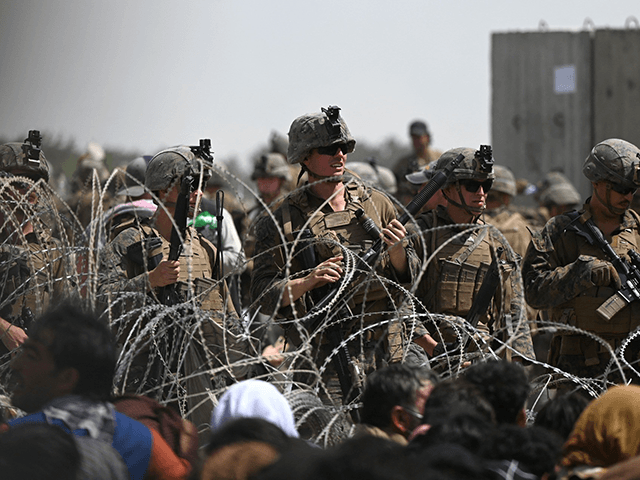 U.S. soldiers stand guard behind barbed wire as Afghans sit on a roadside near the military part of the airport in Kabul on August 20, 2021, hoping to flee from the country after the Taliban’s military takeover of Afghanistan. (WAKIL KOHSAR/AFP via Getty Images)

“Not the fact that we left, I was the one that got our soldier count down to 2 thousand in preparation for leaving, but the way we left, taking the military out first, 13 dead soldiers (with many badly injured), leaving many Americans behind, and giving the enemy over 85 billion dollars worth of the best military equipment in the world. So sad!” he continued. 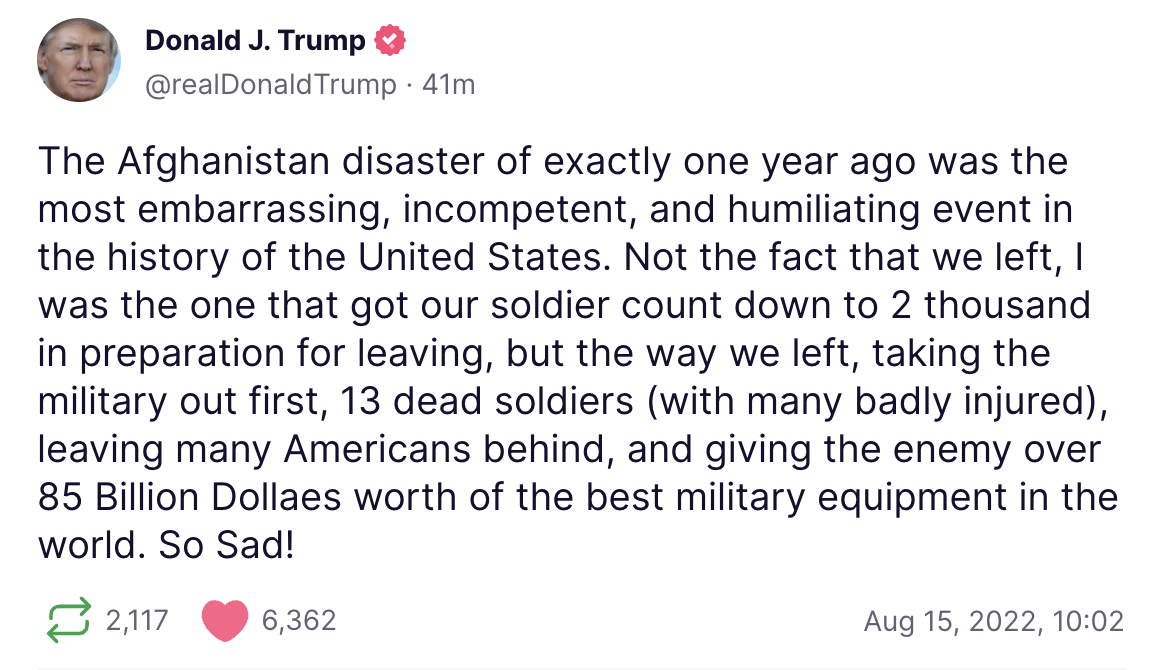 The Taliban Sunni terrorist organization took over Afghanistan entirely on August 15, 2021 “after leftist President Joe Biden violated an agreement between Washington and the group that would have seen American troops leave the country by May 1, 2021,” Breitbart News reported, 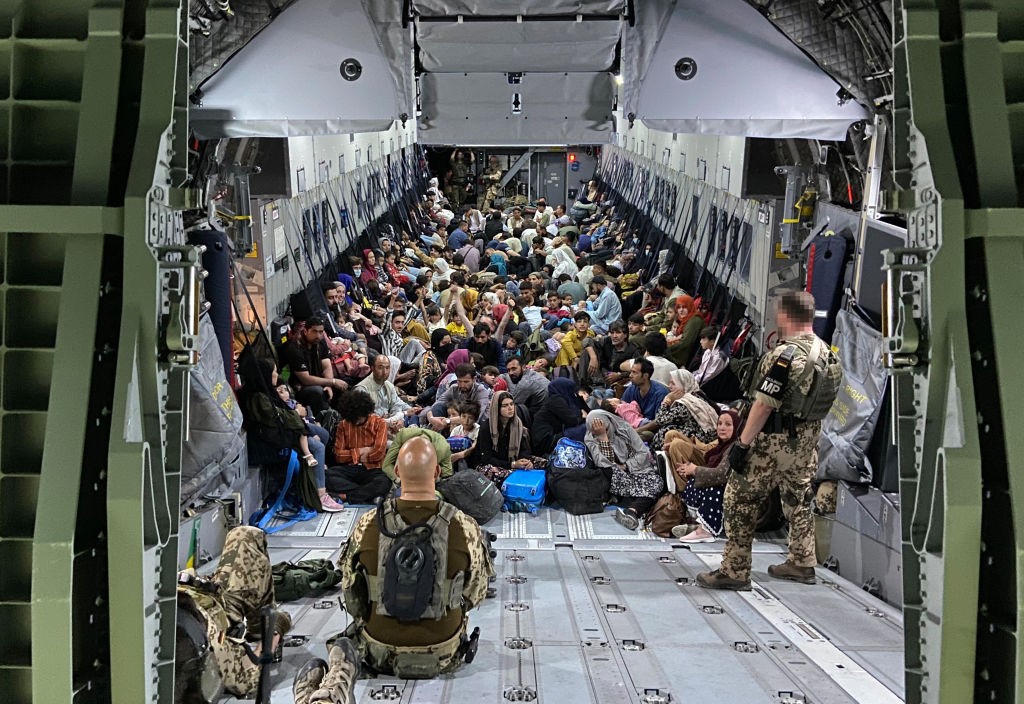 In this handout image provided by the Bundeswehr, evacuees from Kabul sit inside a military aircraft as they arrive at Tashkent Airport on August 22, 2021. (Handout/Bundeswehr via Getty Images)

“Despite demanding praise from the American people for ending the Afghan War, Biden extended it to September 2021, then shortened the deadline to August as it became clear the government of then-President Ashraf Ghani would not hold on to power beyond that month,” wrote Frances Martel, international news editor for Breitbart News. “The Taliban began a sweeping campaign to overthrow the government on the grounds that Biden had nullified the deal that kept them from trying to overthrow the government.” 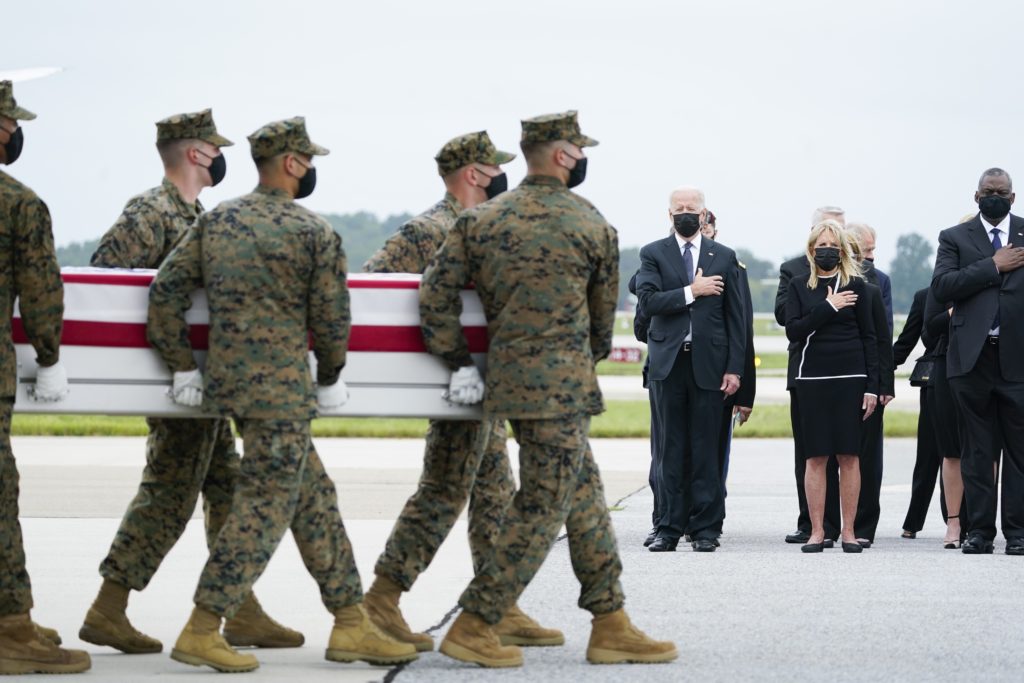 Most notably, 13 American servicemembers were killed in an August 26 Kabul airport attack, after a suicide bomber slipped past Taliban checkpoints to the gates where they were screening entrants. 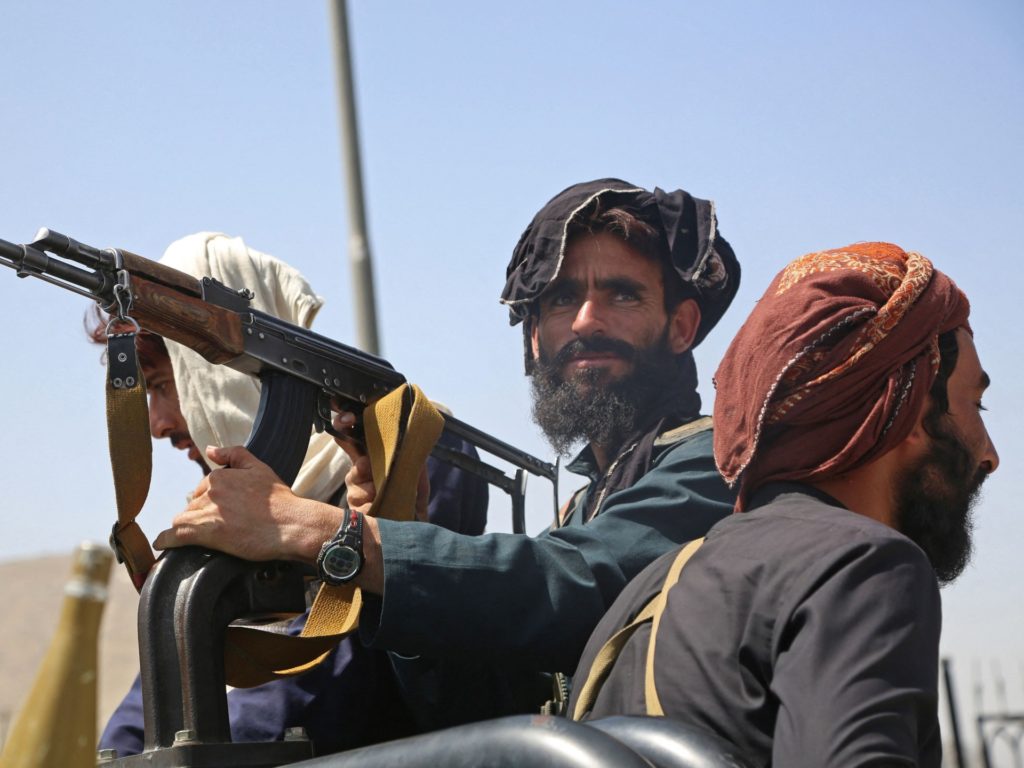 Taliban fighters stand guard in a vehicle along the roadside in Kabul on August 16, 2021, (-/AFP via Getty Images)

Trump previously condemned Biden’s Afghanistan withdrawal the morning before servicemembers were killed in the airport attack. In an exclusive interview with Breitbart News on August 25, 2021, Trump called the withdrawal the “single most embarrassing moment in the history of our country.” 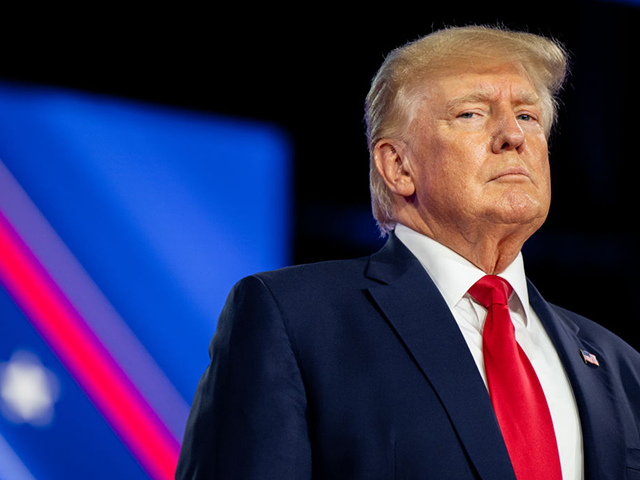 “Well, the only thing that surprised me is that everybody knew how absolutely stupid this situation in Afghanistan was, that it should have never ever been this way,” Trump said. “Because everybody knows. A child would know, you take the military out last. You get everybody out, then you get all the equipment — you take your $83 billion worth of equipment — then you blow up the bases. And perhaps you stay at, you take a certain area that you may want to keep like Bagram and keep the base Bagram because it’s next to China and Iran. It costs billions and billions of dollars to build. And maybe you keep that for other reasons. But everybody knows that you take your military out last. And they took the military out first.”

House Republicans released a 118-page report assessing Biden’s Afghanistan withdrawal in preparation for the year anniversary. While Biden has yet to comment, the White House is reportedly planning to circulate its own memo, “defending President Biden’s decision to withdraw troops from Afghanistan and claiming the move strengthened national security by freeing up critical military and intelligence agents,” Axios reported.