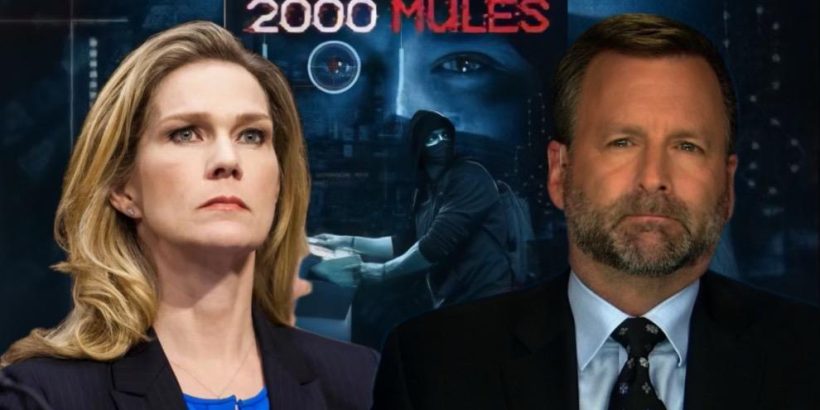 “When we started the project, we didn’t know [what we would find],” said Catherine Engelbrecht, the Texas group’s founder and president.

“We began to think through what is a realistic expectation or threshold for when going to a dropbox is too many times. We wanted to focus on a clear, narrow data set [to demonstrate] “extreme outlier behavior.”

The group’s investigators settled on 10 visits as an actual number—but “here, in Arizona, they went an average of 21 times,” Engelbrecht told the panel of state legislators on May 31.

“The only thing I would like to see come out of this meeting is people going to jail,” said State Rep. Quang Nguyen (R). “I would just like to see people cuffed.”

“This is political grandstanding, which I find is shameful,” said Arizona state Rep. Mark Finchem (R).

“They’re trying to suspend the rules, which is always a bad idea—to bring forward a bill that hasn’t gone to committee, and that has not had any vetting whatsoever. It’s not going to happen.”

During the 90-minute presentation, Engelbrecht and True the Vote data investigator Gregg Phillips, former head of Mississippi’s Department of Human Services, described the group’s investigation into so-called “mules,” illegal ballot runners, and the role NGOs may have played to commit 2020 election fraud.

The investigation focused on two of the state’s largest counties—Maricopa County and Yuma County—and on unique visits to ballot boxes utilizing cell phone tracking technology to develop “patterns of life” for each alleged ballot trafficker.

“We resolved to try to find a path that we could measure that would be useful to law enforcement,” Engelbrecht said.

In Yuma County, the study found 1,435 unique dropbox visits by 41 target devices based on cell phone signals, or “pings.”

Engelbrecht said a geofence is around every dropbox to provide a “digital coordinate set” and measure how many times a device passed through the geofence. Measurements are precise to within a meter of contact with a ballot box.

The federal government uses the same tracking technology. Its accuracy is “nearly perfect [like] wearing an ankle bracelet,” Engelbrecht said.

“Friends, it’s happening on all of our phones, which are attached to us at almost all times. Suffice for this purpose and for this time to say the outlier set was so extreme that it warrants serious consideration, one that we hope this body before us will consider,” she said.

Phillips said the web of cell phone signals is “so significant. Your phone is sending regular pings [this] is how all that comes together.”

He added, “It can’t be overstated not to do what the [New York Times] did” in a series of articles on geofencing—”to say we got 50 billion pings and make all these [erroneous] assumptions.”

Phillips said the group’s study sifted through billions of signals, “teasing out” devices based to exclude “false positive” signals.

Dinesh D’Souza illustrated these findings in the new movie “2,000 Mules,” which seeks to expose organized ballot trafficking in the 2020 election.

“We decided to go in on a methodology that uses ad data [embedded] in all of your phones. This is how digital DNA is captured,” Engelbrecht said.

“If there were a subversion of [electoral] process, it would show up in the drop boxes. We believed that to prove it [geospatial data] would be something to focus on. We resolved to look at the ways to prove this.”

True the Vote is investigating alleged 2020 ballot harvesting in Georgia, Michigan, Wisconsin, and Pennsylvania electoral jurisdictions as well, and will share its findings with law enforcement officials that could lead to criminal investigations.

Engelbrecht said inaccurate voter rolls provide a “gateway to all your problems” with mass mailing of ballots. She said that issues are more likely to occur at ballot drop boxes because they are not well regulated.

Finally, lawmakers should make the penalty for ballot running something “cheaters will fear,” said Engelbrecht, who views 2020 election fraud as a “vertical grift layers and layers deep.”

“The exploitation targets the most vulnerable communities. This is voter abuse. This is not about Republicans or Democrats. This is about securing the vote,” Engelbrecht said.

Arizona state Rep. Leo Biasiucci (R) said, “Obviously, something is going on. We’ve got to figure out what went wrong, how to fix it, and if you were involved, you should be prosecuted.”

State Sen. Nancy Barto (R) said it is “very scary” for voters not to have confidence in the ballot.

“We are going to get a handle on this,” she said.