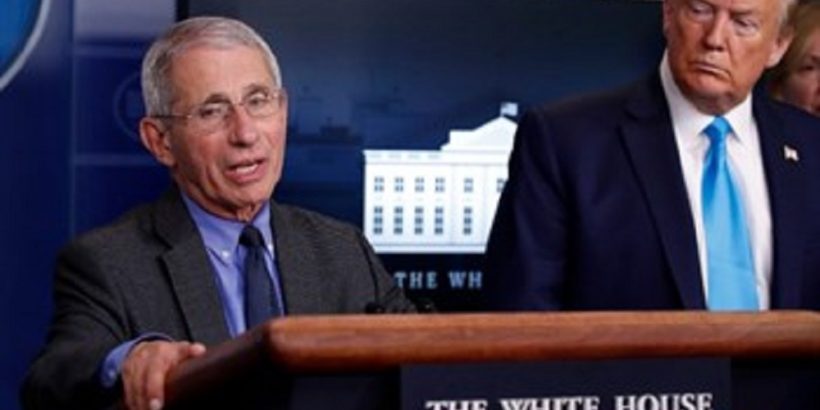 Dr. Anthony Fauci, whose “expert” advice to President Trump has resulted in the complete shutdown of the greatest economic engine in world history, has known since 2005 that chloroquine is an effective inhibitor of coronaviruses.

How did he know this? Because of research done by the National Institutes of Health, of which he is the director. In connection with the SARS outbreak – caused by a coronavirus dubbed SARS- CoV – the NIH researched chloroquine and concluded that it was effective at stopping the SARS coronavirus in its tracks. The COVID-19 bug is likewise a coronavirus, labeled SARS-CoV-2. While not exactly the same virus as SARS-CoV-1, it is genetically related to it, and shares 79% of its genome, as the name SARS-CoV-2 implies. They both use the same host cell receptor, which is what viruses use to gain entry to the cell and infect the victim.

The Virology Journal – the official publication of Dr. Fauci’s National Institutes of Health – published what is now a blockbuster article on August 22, 2005, under the heading – get ready for this – “Chloroquine is a potent inhibitor of SARS coronavirus infection and spread.” (Emphasis mine throughout.) Write the researchers, “We report…that chloroquine has strong antiviral effects on SARS-CoV infection of primate cells. These inhibitory effects are observed when the cells are treated with the drug either before or after exposure to the virus, suggesting both prophylactic and therapeutic advantage.”

This means, of course, that Dr. Fauci (pictured at right) has known for 15 years that chloroquine and it’s even milder derivative hydroxychloroquine (HCQ) will not only treat a current case of coronavirus (“therapeutic”) but prevent future cases (“prophylactic”). So HCQ functions as both a cure and a vaccine. In other words, it’s a wonder drug for coronavirus. Said Dr. Fauci’s NIH in 2005, “concentrations of 10 μM completely abolished SARS-CoV infection.” Fauci’s researchers add, “chloroquine can effectively reduce the establishment of infection and spread of SARS-CoV.”

Dr. Didier Raoult, the Anthony Fauci of France, had such spectacular success using HCQ to treat victims of SARS-CoV-2 that he said way back on February 25 that “it’s game over” for coronavirus.

He and a team of researchers reported that the use of HCQ administered with both azithromycin and zinc cured 79 of 80 patients with only “rare and minor” adverse events. “In conclusion,” these researchers write, “we confirm the efficacy of hydroxychloroquine associated with azithromycin in the treatment of COVID-19 and its potential effectiveness in the early impairment of contagiousness.”

The highly-publicized VA study that purported to show HCQ was ineffective showed nothing of the sort. HCQ wasn’t administered until the patients were virtually on their deathbeds when research indicates it should be prescribed as soon as symptoms are apparent. Plus, HCQ was administered without azithromycin and zinc, which form the cocktail that makes it supremely effective. At-risk individuals need to receive the HCQ cocktail at the first sign of symptoms.

But Governor Andrew Cuomo banned the use of HCQ in the entire state of New York on March 6, the Democrat governors of Nevada and Michigan soon followed suit, and by March 28 the whole country was under incarceration-in-place fatwas.

Nothing happened with regard to the use of HCQ in the U.S. until March 20, when President Trump put his foot down and insisted that the FDA consider authorizing HCQ for off-label use to treat SARS-CoV-2.

On March 23, Dr. Vladimir Zelenko reported that he had treated around 500 coronavirus patients with HCQ and had seen an astonishing 100% success rate. That’s not the “anecdotal” evidence Dr. Fauci sneers at, but actual results with real patients in clinical settings.

“Since last Thursday, my team has treated approximately 350 patients in Kiryas Joel and another 150 patients in other areas of New York with the above regimen. Of this group and the information provided to me by affiliated medical teams, we have had ZERO deaths, ZERO hospitalizations, and ZERO intubations. In addition, I have not heard of any negative side effects other than approximately 10% of patients with temporary nausea and diarrhea.”

All I’m doing is repurposing old, available drugs which we know their safety profiles, and using them in a unique combination in an outpatient setting.”

The questions are disturbing to a spectacular degree. If Dr. Fauci has known since 2005 of the effectiveness of HCQ, why hasn’t it been administered immediately after people show symptoms, as Dr. Zelenko has done? Maybe then nobody would have died and nobody would have been incarcerated in place except the sick, which is who a quarantine is for in the first place. To paraphrase Jesus, it’s not the symptom-free who need HCQ but the sick. And they need it at the first sign of symptoms.

While the regressive health care establishment wants the HCQ cocktail to only be administered late in the course of the infection, from a medical standpoint, this is stupid. Said one doctor, “As a physician, this baffles me. I can’t think of a single infectious condition — bacterial, fungal, or viral — where the best medical treatment is to delay the use of an anti-bacterial, anti-fungal, or anti-viral until the infection is far advanced.”

So why has Dr. Fauci minimized and dismissed HCQ at every turn instead of pushing this thing from jump street? He didn’t even launch clinical trials of HCQ until April 9, by which time 33,000 people had died.

This may be why: “Chloroquine, a relatively safe, effective and cheap drug used for treating many human diseases…is effective in inhibiting the infection and spread of SARS CoV.” That’s the problem. It is safe, inexpensive, and it works – in other words, there’s nothing sexy or avant-garde about HCQ. It’s been around since 1934.

Given human nature, it’s possible, even likely, that those who are chasing the unicorn of a coronavirus vaccine are doing so for reasons other than human health. I can’t see into anybody’s heart, and can’t presume to know their motives, but on the other hand, human nature recognizes that there’s no glory in pushing HCQ, and nobody is going to get anything named for him in the history books. The polio vaccine was developed by Jonas Salk in 1954, and it is still known as the “Salk vaccine.” There will be no “Fauci vaccine” if HCQ is the answer to the problem.

So while Dr. Fauci is tut-tutting and pooh-poohing HCQ, Dr. Raoult and Dr. Zelensky are out there saving lives at $20 a pop. Maybe we should spend more time listening to them than the wizards-of-smart bureaucrats the Talking Snake Media fawns over.

Dr. Fauci is regarded by the Talking Snake Media as the Oracle at Delphi. The entire nation hangs on his every word. But if nobody is dying and nobody is locked down, his 15 minutes of fame fades to zero. Very few people are not going to be influenced by that prospect, especially when it’s easy to keep the attention of the public by continuing to feed the panic.

It should not be overlooked that there is no money in HCQ for Big Pharma since HCQ is a generic that can be manufactured so cheaply there is little profit margin in it. On the other hand, the payday for a vaccine will literally be off-the-charts. Who knows what kind of behind-the-scenes pressure is being put on Fauci and others in the health care establishment?

There is a monstrous reputational risk for those who will be found to have dismissively waved off a treatment that could have been used from the very beginning, even back on February 15 when Dr. Fauci said that the risk from Coronavirus was “minuscule.” How many lives could have been saved if the heads of our multi-billion dollar health care bureaucracy had been advocating for HCQ treatment from day one? We’ll never know. Instead, their advice has been dangerous and deadly in every sense of that word.

Someday – maybe even today – we will be able to identify the individuals who had the knowledge and expertise to make a global difference, but turned up their noses at the solution when it could have made all the difference in the world.