The Flip Side Of The Coin Means Reward 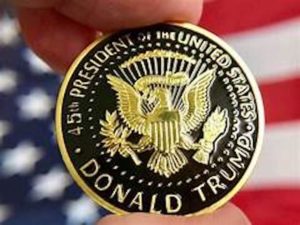 The world is watching. We are awake! The banishment of our former freedoms has been blatantly thrown back in our faces leaving us to question, ‘How did this happen?’

Threats, fines and arrests, have exposed the agenda of the Deep State. They said socialism would be good for America. They lied. Our lives now similarly parallel what our history books revealed about communism.

As Patriots and Anons boldly push back against the DS with posts, videos and other information, people are beginning to see the flip side of the coin. With governors and mayors still cracking down on their residents, more and more cases are being dropped. Governors do not have the right to interfere with those who want to pursue their freedom. States have no legal authority to close businesses.

Illinois releases 146 dangerous sex offenders. Why are Democratic governors around the country releasing dangerous inmates early? Why are Democratic governors around the nation instructing police officers to arrest those who challenge the lockdown orders? They are arresting the very people who vote. Let the DS destroy themselves.

The Dems have their marching orders from the DS. This means they are a part of this planned coordinated Covid event. It was created by the DS, MSM, etc. Can you see clearly? Are you ready to stand for your rights before they are stripped away? The governors and mayors are the dictators, the ones who are breaking the law, yet they threaten and arrest you!

Permission is not being sought any longer as people demand their rights to pursue their God-given liberties. Businesses are opening knowing the Constitution is on our side. Common courtesy has always been, if you are sick stay home. If you are well, go to work. The DS is pushing an aggressive narrative to be afraid. If they can keep a cure from people, they can keep fanning the narrative of fear, then the DS remains in power.

All those governors and mayors who are breaking the law at your expense, would rather defend the Chinese Communist Party than defend Americans. They are elected officials, public servants. The Constitution is not suspended in times of crises. It is still alive and well. Are we going to keep it this way?  Who will hold crooked officials accountable?

Former President Obama pointed out he had no scandals during his administration. Tom Fitton with Judicial Watch begs to differ.  He has been investigating Obama and has uncovered the IRS abuse of conservatives, Fast and Furious, Spygate, Cash-to-Iran terror regime, Arms to Jihadists in Syria,   ‘You can keep your doctor,’  Clinton crime cover up, The Biden scandal, and Benghazi, etc.  For someone who has never had a scandal, the list sure is lengthy.

The storm is coming and much will be exposed. Hang tight, Patriot… be strong, be brave and stand!