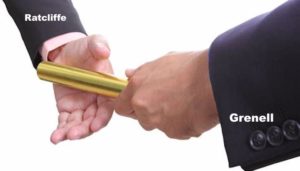 Undercover journalists caught several Planned Parenthood officials on video, admit to selling aborted baby parts and organs. After the release of the video, PP filed suit against them stating the video was doctored. Close inspection debunked these claims and soon, they found themselves in court. While under oath and again on video, multiple Planned Parenthood officials have admitted to trafficking aborted baby body parts and organs.  These are criminal acts. Will PP be forced to pay for their crimes?

Ric Grenell declassified many documents while he was working as DNI. Just before he passed the baton to John Ratcliffe, he declassified even more. It isn’t good for the Deep State and they know it. How will Ratcliffe run with it, now?

Trump is asking Republicans to vote against FISA; to limit surveillance powers. Why would a dictator do this…unless Trump really is not a dictator? FISA was created to spy on terrorist, but is illegal to spy on Americans without a warrant and Comey’s team didn’t have one. New FBI documents show Obama’s Admin spied on Trump and the Senate.

The Deep State is going to do whatever it takes to keep Trump from being elected in November. They will push for mail-in voting, events, or anything they think will keep Trump from winning. This whole pandemic was about pushing voter ID in November. The DS creates the fear and panic. The media simply fans the flames. They don’t care if you lose your job or social media giants go down. They have their marching orders and they are following through.

Trump put out a tweet that encouraged getting facts about mail-in ballots. An hour later, a story came out saying, ‘USPS mail carrier arrested & charged with attempted election fraud.’ This is what Trump is talking about. Mail-in ballots have a proven history of enormous voter fraud. How many officials nation-wide were not elected, but fraudulently placed? Even Jerry Nadler, in 2004 said, “Paper ballots are extremely susceptible to fraud…I can show you experience which would make your head spin.”

Twitter seems to be censoring Republicans, Conservatives, anyone pushing voter-ID and anyone discussing topic the DS wants to avoid.  Now, Twitter decided to fact-check Trump on his voting tweet. Is Twitter going to fact-check Biden in regard to all his lies, or Schiff on his memo? Is this a double-standard when it comes to censorship?

We know the Deep State creates false flags then spins the story so they can clog the news cycle and blame Trump. We see this over and over. Yesterday a police officer killed a man. The media has pulled the race-card. The media is saying this cop is a MAGA supporter but the photo being circulated is really troll who was photographed at a Clinton rally.  He is not the police officer.  The media is using this and is spinning the narrative, again.

So far, the DS has lost every attempt to oust Trump. The future of our Republic and the survival of our a nation is critical. We rise or we die. We are at WAR…this is the silent enemy. The job of the media is to keep fear alive. If we are to win this war and save our republic, we must remain vigilant, research and especially vote. The Goal of Q is to expose documentation and proclaim truth.

People are waking up and are wondering why we are still in lockdown. Why are we still being shamed into wearing masks? Why are healthy people being quarantined?  Quarantine is for the sick, not for the healthy. The curve flattened long ago. The DS is terrified of losing power, but their evil plans are being exposed.  Patriots are in control. Timing is everything!