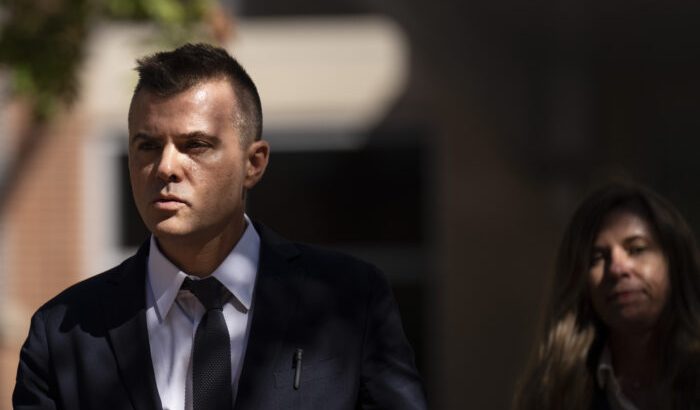 ALEXANDRIA, Va.—The FBI paid the primary source of the notorious debunked Steele dossier nearly $220,000 between March 2017 and October 2020 to be a “confidential human source” for the bureau.

And Russian business analyst Igor Danchenko was worth every penny of it, FBI special agent Kevin Helson said during the third day of testimony on Oct. 13 in Danchenko’s trial on five counts of making false statements to investigators in January 2017.

Testifying before U.S. Eastern District of Virginia Judge Anthony Trenga, Helson said during that 42-month span, information from Danchenko generated 40 intelligence reports and spurred 25 investigations, calling his network of contacts the best he had seen in his 20-year career and changing the way the agency runs its Russian counterintelligence programs.

When then-Attorney General William Barr in July 2020 released a redacted transcript of Danchenko’s three-day interview with agents in January 2017—where he allegedly made the false statements—he became “a target because of the political environment” and potentially exposed to Russian operatives, Helson said.

“Outed” and embroiled in high-profile political drama during the summer of 2020, Danchenko could no longer function effectively. The agency closed his “confidential human source” status, Helson said, meaning he also lost a significant component of his income.

On Oct. 21, 2020, Helson submitted a final lump sum payment request of $346,000 for Danchenko, but the Department of Justice (DOJ) denied it. The arrangement ended with that.

“Would you agree that losing Mr. Danchenko was a blow to national security?” defense attorney Stuart Sears asked Helson.

“Yes,” he said, noting he routinely gets calls from fellow agents asking to speak with Danchenko about counterintelligence issues, especially since Russia’s invasion of Ukraine.

“It was a big deal for the FBI to have access to someone like Mr. Danchenko, wasn’t it?” Sears asked Helson.

“Yes,” he replied. “In my opinion, it would have been a big win for the FBI if he had come aboard sooner.”

A Virginia resident, Danchenko is charged with five counts of making false statements to FBI supervisory counterintelligence analyst Brian Auten and FBI special agent Stephen Somma during three January 2017 interviews. He has pleaded not guilty to all charges, which could carry a 25-year prison sentence if convicted.

Danchenko was a political risk analyst with London-based Orbis Business Intelligence, where he was the primary source of information for Christopher Steele, a former British spy who compiled allegations about Trump’s ties to Russia in 2016 in 17 reports that became known as the “Steele dossier.”

The Steele dossier was paid for by Hillary Clinton’s 2016 presidential campaign and orchestrated by Fusion GPS, a Washington-based “strategic intelligence” firm implicated in a range of alleged skullduggery on behalf of Clinton and the Democratic National Committee during the 2016 campaign.

According to Auten, Danchenko lied to him and Somma by concealing his contacts with Charles Dolan Jr., a longtime Democratic “operative” and Clinton family associate, who is among the sources Danchenko tapped to feed Steele information in the dossier.

Danchenko is also accused of lying about an alleged July 2016 meeting with Sergei Millian, a Belarusian American businessman and former president of the Russian American Chamber of Commerce, arranged during an alleged phone call from a Russian-speaking man who never identified himself.

As a result of the phone call, which the FBI maintains there’s no record of and never happened, Danchenko told Auten and Somma that he went to New York for the arranged meeting with the anonymous caller, who he said he assumed was Millian but never claimed to be certain who it was.

The meeting was a bust because no one but Danchenko showed up, he told Auten and Somma during interviews from Jan. 24 to Jan. 26, 2017.

Danchenko’s attorneys—Sears and Danny Onorato of Washington-based Schertler Onorato Mead & Sears—maintain he told the truth in interviews and say investigators did not ask follow-up questions to clarify his responses to what they describe as vague queries.

Durham, appointed in 2020 by Barr to investigate the FBI’s 2016 Crossfire Hurricane counterintelligence probe into Trump, his campaign, and Russia, questioned Helson for more than three hours Oct. 13 about what he learned about Danchenko as his handler from March 2017 to October 2020.

Durham repeatedly pointed out how Helson was apparently unaware of some of Danchenko’s unreported contacts with Dolan and Olga Galkina, his childhood friend and former schoolmate who also worked for Steele.​ Both contributed to the Steele dossier. Dolan testified before Helson took the stand Oct. 13.

As the clock neared 6 p.m., Durham in his redirect close of Helson’s five-plus hours on the stand, apparently had heard enough praise for Danchenko from one of his own witnesses.

After excoriating Auten for a litany of inadequacies after the analyst was on the stand for nine hours spanning two days, Durham closed another long day of often laborious testimony with a fiery rebuke of an FBI employee.

“You wrote ’none.’ And that’s not true,” he railed, noting Danchenko was a subject of a 2009 FBI counterintelligence probe that Auten actually participated in.

“You knew that” Danchenko had been investigated by the agency, Durham said. “Did you go back when you found out that there had been an open espionage case on Mr. Danchenko, to correct that?”

Helson said the case was “like 10 years ago” and dropped after Danchenko left the country because his visa had expired. “He left and came back a year later,” he said.

Not true, Durham said. “Did you know he remained in the country despite” his expired visa? “Are you aware he was supposed to leave the country but didn’t?”

The 2009 espionage case stemming from the FBI’s Baltimore field office is closed, he said, but the allegations—that Danchenko offered to connect people with money in exchange for classified information—are serious with at least one witness who can testify to it.

Helson shot back, stating there is at least one “counter-witness” who can refute the allegations, dismissing the case as not worth investigating.

Durham asked Helson if he subjected Danchenko to a polygraph test, looked into his overseas travel, asked him to go through the agency’s human validation assessment, and checked to ensure his confidential source isn’t committing immigration fraud.

“Did you do that?” Durham asked testily with each query and to each, Helton replied, “No.”

Durham will resume his discussion with Helson when court convenes on Oct. 14 at 9:30 a.m. Also scheduled to testify are FBI intelligence analysts Brittany Hertzog and Amy Anderson, and FBI agent Ryan James.