Americans Have Had Enough Of the Mainstream Media, the ‘Enemy Of The People’ 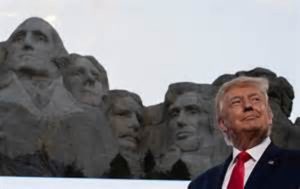 During President Trumps 4th of July address, he warned the Deep State/Mainstream Media that his administration was coming after them if they didn’t stop writing fake articles and pushing a fake agenda. Americans have had enough of fake news and he told them they must stop.

The 4th of July Mt. Rushmore celebration was frowned upon, and in spite of the negative press, 7,500 thousand Patriots were allowed into the rally while thousand more were routed to local ‘Campground Celebration’ locations.

The MSM continues to show Americans how much they hate America. When Obama visited Mt. Rushmore years ago, CNN stated he said it was ‘majestic,’  but when Trump visited Mt. Rushmore this past weekend, CNN criticized the monument saying it was of two slave owners and also was wrestled away from the Native Americans.

It’s obvious the DS/Media doesn’t want the country to come together. But the citizens in Los Angeles spoke out on the 4th of July. All over the city, Californians lit off fireworks to celebrate our God-given rights of American freedom. Even though there is a $15,000 fine, thousands revolted against Gov. Newsom and felt it was worth the risk.

The New York Times article that accused Russia of paying the Taliban to kill American soldiers was  fake news.  The Russian spokesman, the Taliban spokesman and the White House all said this article and these accusations are fake and they want to go through with a peace treaty.

The New York Times issued a partial retraction, however, not all retractions are read by these same people. They will still believe the first narrative. Why is the New York Times spreading fake news to the American public and the world? Do you see why the media is called the ‘Enemy of the People?’

The virus is being pushed by the DS/Media like never before. Memorial weekend, the 4th of July celebrations will be blamed for an uptick. In spite of more tests being confirmed, the death toll is near zero. Why isn’t the media reporting this? They reported the death toll in the beginning. Why not now when we need encouragement more than ever? Enemy of the People!

There are over 50 studies world-wide stating many people in different countries developed anti-bodies to the virus. The percentage of people who had COVID translates to the equivalent of the flu. With next to zero deaths, it’s very likely the push for the pandemic status will stop. Will the media still push the fear?  Enemy of the People! 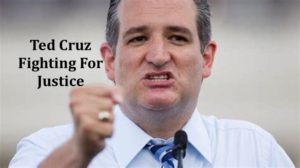 Ted Cruz is currently introducing legislation to hold city officials, governors and mayors who are allowing rioting, looting, injury, downing of statues, etc., to be held accountable. The overall population is not behind the statue removal process but the media is giving the impression that we are. Why? Because they are the enemy of the people.

Trump signed an Executive Order to create a vast outdoor statue park, celebrating the greatest American’s who ever lived. Every bit of damage of Federal Statues by the DS, has just been countered!

In Georgia, a Black Panther-type army appeared to be trying to start a Civil War! They were marching in the streets saying they wanted to fight the Militia. The DS continues to push fear, try to clog the news cycle and to divide Americans.

President Trump told America and the world that school children are being taught to hate our country and to view the heroes as villains. In our schools, corporate meetings, sports, Hollywood, and colleges demand absolute allegiance to the far left ideology of socialism and are spinning a web of lies.  Every motive is twisted and every fact is distorted until our history is completely erased.

This movement is pushing to destroy the truth about Mt. Rushmore and to erase history. This is why we are seeing statues pulled. Trump says we will set history and it’s record straight. 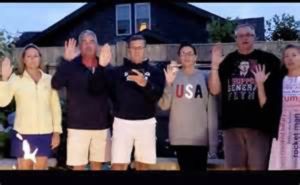 General Flynn’s family took ‘The Oath!’ As he lead out, he wrapped it up with,  “Where We Go One, We Go All.” Gen. Flynn just confirmed Q!

Trump gave the warning to the DS/MSM to back off but we know they will not. They are the enemy of the people.  But Trump holds all the cards against them. His administration has the documentation, witnesses, videos and everything.  When the time is right, he will play the Trump card!