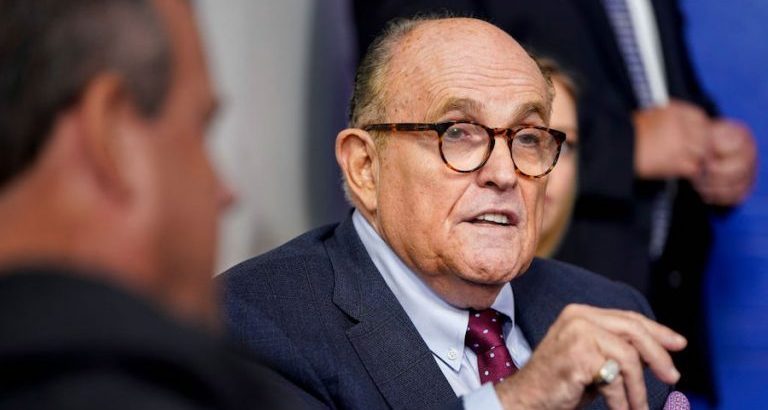 Rudy Giuliani’s attorney accused the Department of Justice (DOJ) of a “corrupt double standard” by executing warrants against Giuliani on suspicion of failing to register as a foreign agent, while allegedly ignoring “clear evidence” on a laptop purporting to belong to Hunter Biden that would support similar allegations and a probe.

Costello said the devices seized by investigators at Giuliani’s office are “replete with material covered by the attorney-client privilege,” and complained that their seizure amounted to a “disturbing example of complete disregard” for the constitutionally-protected privilege.

The attorney alleged that the DOJ was biased in its actions as it “completely ignored clear evidence” on a laptop hard drive purportedly belonging to Hunter Biden, of apparent wrongdoing, including of failing to register as a foreign agent.

Costello said that the search warrants executed against Giuliani involve “only one indication of an alleged incident of failure to register as a foreign agent,” charges he said Giuliani has denied and repeatedly offered to prove to investigators that the allegations are untrue.

“Twice, Mr. Giuliani’s counsel offered to sit with the SDNY and demonstrate that Mr. Giuliani’s conduct was lawful,” Costello said, questioning whether the judge who signed the warrants had been informed about the offer and suggesting the decision to proceed with the search warrants was politically motivated.

“This is totally unnecessary,” Costello told Fox News on Wednesday, adding that the raid was carried out to “make him look like he’s some sort of criminal.”

The Epoch Times reached out to the DOJ with a request for comment on Costello’s statement, but did not receive a response by press time. FBI officials and Giuliani’s team didn’t respond to earlier requests for comment by The Epoch Times on the warrants.

In the statement, Costello blamed “Trump Derangement Syndrome” and “hatred” as driving this “unjustified and unethical attack” on Giuliani, whose conduct he insisted “was absolutely legal and ethical.”

In late 2019, amid the first House impeachment inquiry against Trump about a conversation he had with Ukraine’s president in July of that year, prosecutors charged two alleged former associates to Giuliani, Lev Parnas and Igor Fruman, with unrelated crimes regarding alleged campaign finance violations.

On Jan. 20 of last year, Giuliani appeared on Fox News’ “The Ingraham Angle” and said he’s no longer close to Parnas, a former client, and claimed that Parnas was lying about some of his claims.

One example, according to Giuliani, was a claim that Parnas met with Trump at the White House during Hanukkah and was deputized by the president.

“Lev is someone I was close to. Obviously, I was misled by him. I feel very bad. I still feel sorry for him. I’m not going to respond to him for each and every one of the misrepresentations he’s made, because there were so many,” he said. “If I’m called as a witness, I’m prepared to do it.”

Before that, Giuliani, who was Trump’s personal attorney at the time, told CNN in 2019 that he asked Ukrainian officials to look into then-candidate Joe Biden before he noted that he “asked them to look into the allegations that related to my client [Trump], which, tangentially, involved Joe Biden in a massive bribery scheme, not unlike what he did in China.”

“I asked the Ukraine to investigate the allegations that there was interference in the election of 2016 by the Ukrainians for the benefit of Hillary Clinton,” Giuliani said.

When FBI officials searched the home of Trump’s former lawyer Michael Cohen the former president said it was part of a “witch hunt” against him on behalf of the federal law enforcement agency. Cohen was eventually convicted and sentenced, spending more than a year at a federal prison near Otisville, New York.

Trump has long said that the Russia inquiry and impeachment against him were part of a politically motivated campaign to undermine his presidency and the legitimacy of his 2016 election win.