Are we EVER going to see justice from the Terror Attacks of 9/11?  Or are we going to continue with on-going conjecture without closure, similar to the JFK Assassination?  In both situations… the people of the world were told a particular narrative that doesn’t seem to hold water with those who are critical thinkers.

Yet, we continue to hope justice will be served, while token efforts of endless discovery are discussed ad nauseum in the KSM et al, 9/11 Pre-trials.  Yes…. l said, “Pre-trials”. After 19 years, that’s as far as we’ve come.

Everything in court has been going by the book, and always carefully discussed, but every single time, somehow, someway, a very good excuse will coincidentally come up to prevent forward movement.  At what point do things stop becoming coincidental and start becoming obstruction?

Instead of rehashing old news… let’s take a peek at the very last KSM et al proceeding that happened in January, 2020.

This is where you will NOT be told what to think.  You will decide on your own, because it is the critical thinkers that will force this farce into closure.

In January of 2020, the main discussion point on the docket, was to go over what happened in the Black Sites, for enhanced interrogation.

Members of the CIA were to be put on the stand for discovery purposes, of what evidence, if anything, could be admissible in court.  Remember that Obama in 2009, made the mandate that information gained from enhanced interrogation could not be used as evidence. (Even though it was considered what is called, “white torture”).

Pre-trials at that time were then canceled and a new strategy came about where evidence would be allowed in the new set of Pre-trials, if gathered from what they called, “clean teams”.  In other words… the interrogators were nice when asking questions to the alleged terrorists starting in 2012. (3 years later).

From that point… there was an on-going saga of behind the scenes shenanigans happening, but nothing was ever done about it.  The drama continued on… even though one situation in 2013 should have kicked the entire case out of court again.

So it continued on for years and years, giving what I personally believe was just the illusion of searching for justice.

I mentioned in the past that a number of regular attendees of the 9/11 Pre-trials had told me that this case would NEVER make it to trial.  I also couldn’t understand why that would be at the time… but since I have become a veteran to these trials, I now knew that supposition was correct.

Even though Judge Cohen was the very FIRST judge to ever set a date for the trials to begin over one year ago… I and others knew somehow it wouldn’t happen. It couldn’t.  They have been “kicking the can down the road” for every imaginable excuse for too long now.  Why would they suddenly change?  Judge Cohen set the tribunals to begin on January 11, 2021.

The Pre-trials after that point at times, then became entertaining in watching temper tantrums enmasse because of not being able to manipulate for additional delays.  We don’t have enough time for our Discovery by that deadline said quite a few, but Cohen stood firm.

Then on the very final day of the January 2020 proceedings, Judge Cohen announced to Prosecution, he may have hard decisions to make, if he found the Defense allegations were correct about improper surveillance from the Government. Cohen stated he may have to throw the entire case out of court. >>>>oh oh <<<<

1) About two weeks after the last proceedings, Judge Cohen quit suddenly, citing concerns over his family’s welfare. (Cohen was Presiding Judge over KSM et al) and had made a mandate last July, that the first date of trials were to be January 21st, 2021.

(Side Note): Judge Parrella announced he was accepting a new position elsewhere after he had an emergency in one of the KSM et al proceedings of a detached retina… AND the very day BEFORE al Baluchi was to take the stand about an important revelation .  Parrella also was moving the trials forward until this point and then Judge Cohen was his replacement.

3) All GTMO Proceedings were canceled starting with the scheduled February KSM round, citing COVID – 19 concerns. Minimal staff at GTMO maintained. As of today…this status hasn’t changed.

Could THIS have been the reason for the world to basically shut down? Was COVID another false flag? A diversion? Was 9/11 about to be blown wide open???

GTMO Calendars Are Attached On What is Happening the Next Three Months. (Oct. Nov. Dec.) January 2021 is now blank continuing forward FYI.

The January 2020 round, was the last run of the proceedings.

Place your thoughts in the comment section. Let’s discuss this! 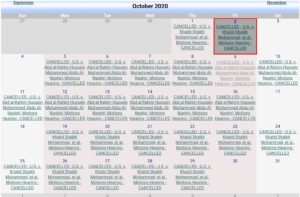 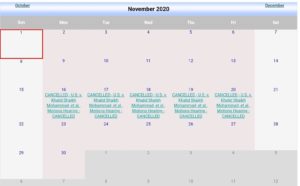 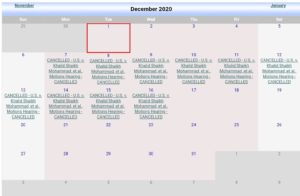