The Hunters Become The Hunted 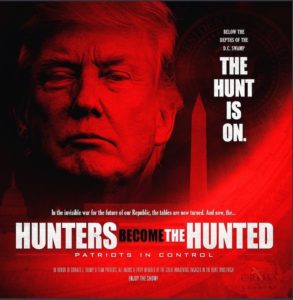 The Patriots are pushing back against Deep State, mainstream media, corrupt politicians with every ounce of evidence, documentation and declassified information they have. The hunters have now become the hunted. RED OCTOBER!

What actually was the DS plan? Treason? Sedition? Crimes against humanity? The documents are beginning to come out. Barr is in charge of all of this and the DS is panicked. How do we know?

They are trying to get rid of Bill Barr.  The New York Bar Association is trying to disbar him.  16,000 former Justice Department Lawyers have accused Barr of using Justices to help Trump in an election. Has Barr even done anything wrong?

“We condemn in the strongest possibly terms, this egregious display of hatred, bigotry and violence. It has no place in America, and as I have said many times before, no matter the color of our skin, we all live under the same laws. We all salute the same great flag and we are all made by the same Almighty God!” ~ President Trump, 2107