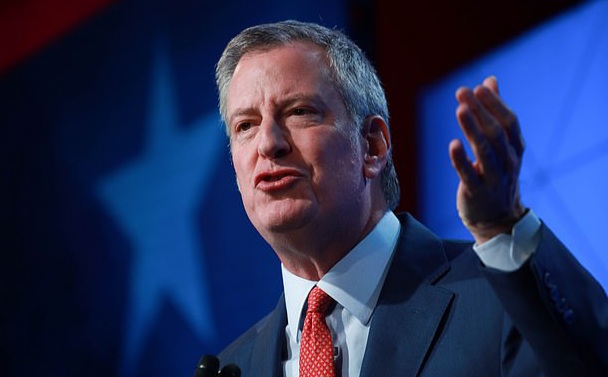 By Julia Marsh and Craig McCarthy

As Mayor de Blasio prepared to get out of Dodge for the weekend, a police union boss issued a very “High Noon”-like ultimatum for him to quit by sundown.

“We need to hear you RESIGNED as Mayor of NYC,” Sergeants Benevolent Association President Ed Mullins wrote on Twitter Friday in response to a post by de Blasio that trashed the 2020 Republican National Convention and the president on Twitter.

“We are WAITING. Only a few hours left until sundown. Give 8 million people a gift & quit. You ruined NYC, Save the City and step down,” Mullins wrote.

Earlier Friday, de Blasio — who was skewered at the closing night of the RNC Thursday by public housing residents, former mayor Rudy Giuliani and Police Benevolent Association president Pat Lynch — had tweeted his thoughts about the convention.

“What did we need to hear this week? Plans to fight COVID-19 and get Americans back to work. What did we hear? Lies about the greatest city in the world and one of the most diverse places on Earth.

“They’re a disgrace to the labor movement. Their embrace of a racist President shows how ill-equipped they are to serve a diverse city and a majority-minority force,” Neidhardt added.“Ed Mullins and RNC speaker Pat Lynch do not represent the views of most New Yorkers, let alone rank-and-file,” Neidhardt tweeted.

The mayor called the union chief a “liar” during a City Hall press conference last month after Mullins criticized him for his handling of the George Floyd protests and the increase in shootings.

De Blasio also called for an investigation of the SBA for tweeting out his daughter Chiara’s arrest record after the First Daughter was nabbed for allegedly blocking traffic during one of the demonstrations.

Story Vetted and Posted by a C-VINE Volunteer. Report from the New York Post