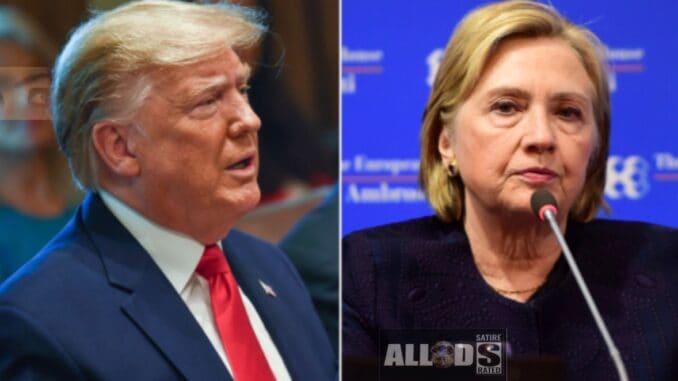 NOTE:  Hillary still has her sights on the White House and will not let go.  Dream on Hillary!  Ain’t gunna happen.  Not now. Not ever.

I dare say that Hillary is tipped – so much so – that if she doesn’t get her way, come hell or high water, she will be 100% in the crazy zone…INSANE.  There, I said it!

Since having her rear end handed to her by President Trump in the 2016 election, Hillary Clinton has turned into a crazy person.

No, that is not a harsh statement. Based on her own words and actions of the three years since her loss, any sane person would have to come to this same conclusion.She just cannot accept the fact that she was not elected President of the United States.

Over and over again, she’s sticking her nose into White House business, telling us what the President is “doing wrong” or how she would have handled such and such situations. She also repeats her delusion that America wanted her, that more of us voted for her.

Now, with the Democrats hoping for a removal from office of our elected president through a sham impeachment, she’s at it again and the crazy just got crazier.

In an interview with ’60 Minutes’, Clinton was asked for her thoughts on the possibility of the man who trounced her in presidential ballots being impeached. Her reply clearly shows she’s losing it: “Well let’s look at this situation. The man who did not get the popular vote of the American public, who stole a victory through the electoral college, who tried to convince the country to throw me in jail without charges, and who is clearly unqualified for the job is accused of criminal offenses in violation of his oath of office. What are my thoughts?”

“My thoughts are that I warned everyone this would happen and that my last three years have been hell because of his accusations. A bomb was mailed to me, for god’s sake. He turned my life upside down.”

“So my main thought is that, if Trump is removed, I deserve to be given his seat. I’ve earned it and the people wanted me.”