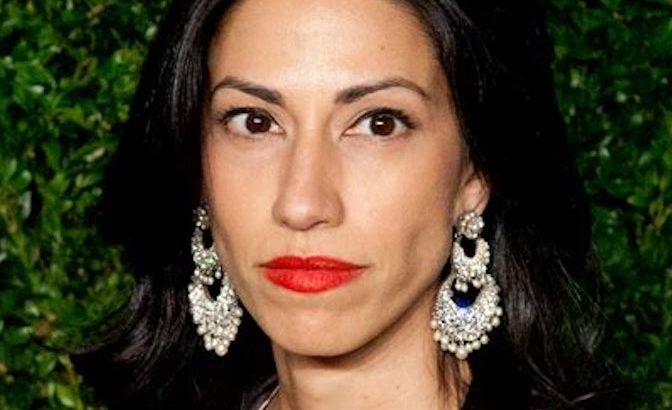 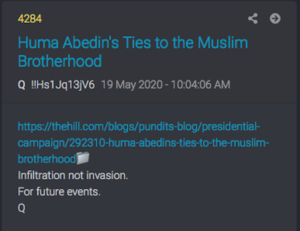 Huma Abedin appears to have secrets. Her connections to the Muslim Brotherhood only illuminate her anti-freedom agenda for the United States.

Post 4284, linked this article today for Anon’s as a point of interest. Information given by the team is alway strategic and perfectly timed. ‘Future proves past,’ is a phrase often used and this case, is no different.

Overwhelming evidence suggest Huma Abedin has deep connection to the Muslim Brotherhood. Michelle Bachmann’s attempt to alert the upper echelon during the Obama Administration fell on deaf ears. The proof presented by Bachmann was quickly debunked by Snopes, a far-left leaning fact-checking company, as a conspiracy theory.

The Muslim Brotherhood has been labeled a terrorist organization.

The Clinton campaign is attempting once again to sweep important questions under the rug about top aide Huma Abedin, her family ties to the Muslim Brotherhood and to Saudi Arabia, and her role in the ballooning Clinton email scandal.

The New York Post ran a detailed investigative piece over the weekend about Ms. Abedin’s work at the Journal of Muslim Minority Affairs from 1995 through 2008, a Sharia law journal whose editor in chief was Abedin’s own mother.

This is not some accidental association. Ms. Abedin was, for many years, listed as an associate editor of the London-based publication and wrote for the journal while working as an intern in the Clinton White House in the mid-1990s.

Her mother, Saleha Abedin, sits on the Presidency Staff Council of the International Islamic Council for Da’wa and Relief, a group that is chaired by the leader of the Muslim Brotherhood, Sheikh Yusuf al-Qaradawi.

Perhaps recognizing how offensive such ties will be to voters concerned over future terrorist attacks on this country by radical Muslims professing allegiance to Sharia law, the Clinton campaign on Monday tried to downplay Ms. Abedin’s involvement in the Journal and the Muslim Brotherhood.

The Clinton surrogate group Media Matters claimed predictably there was “no evidence” that Ms. Abedin or her family had ties to the Muslim Brotherhood, and that Trump campaign staffers who spoke of these ties were conspiracy theorists.

To debunk the evidence, Media Matters pointed to a Snopes.com “fact-check” piece that cited as its sole source… Senator John McCain. This is the same John McCain who met Libyan militia leader Abdelkarim Belhaj, a known al Qaeda associate, and saluted him as “my hero” during a 2011 visit to Benghazi.

Senator McCain and others roundly criticized Rep. Michele Bachmann in 2012 when she and four members of the House Permanent Select Committee Intelligence and the House Judiciary Committee cited Ms. Abedin in letters sent to the Inspectors General of the Department of Defense, Department of State, Department of Justice, Department of Homeland Security, and the Office of the Director of National Intelligence, warning about Muslim Brotherhood infiltration of the United States government.

In response to those critiques, Rep. Bachmann laid out the evidence in a 16-page memo, which has never been refuted by Senator McCain or the elite media.

The evidence, in my opinion, is overwhelming: Huma Abedin is nothing short of a Muslim Brotherhood princess, born into an illustrious family of Brotherhood leaders.

Her father, Syed Zaynul Abedin, was a professor in Saudi Arabia who founded the Institute for Muslim Minority Affairs, an institution established by the Government of Saudi Arabia with the support of the Muslim World League.

The Muslim World League was “perhaps the most significant Muslim Brotherhood organization in the world,” according to former federal prosecutor Andrew C. McCarthy. Its then-General Secretary, Umar Nasif, founded the Rabita Trust, “which is formally designated as a foreign terrorist organization under American law due to its support of al Qaeda,” he wrote.

That is not guilt by association but what federal prosecutors would call a “nexus” of like-minded people who shared the same goals.

A Saudi government document inspired by Ms. Abedin’s father explains the concept of “Muslim Minority Affairs,” the title of the Journal Mr. Abedin founded, and its goal to “establish a global Sharia in our modern times.”

Simply put, Huma Abedin worked for thirteen years as part of an enterprise whose explicit goal was to conquer the West in the name of Islam. No wonder the Clinton campaign wants to sweep this issue under the rug.

Mrs. Clinton has sometimes referred to Huma Abedin as her “second daughter.” Whether it was because of their close relationship or for some other reason, Mrs. Clinton has done much to further the Muslim Brotherhood agenda while Secretary of State, and can be counted on doing more as president.

As Secretary of State, she relentlessly pushed the overthrow of Libyan leader Mohammar Qaddafi, a dire enemy of the Brotherhood, even when President Obama and his Secretary of Defense were reluctant to go to war.

Along with Obama, she pushed for the overthrow of Egyptian leader Hosni Mubarak and his replacement by Muslim Brotherhood leader Mohammad Morsi.

She pushed for direct U.S. involvement in the Syrian civil war, including the arming of Syrian rebels allied with al Qaeda.

As I reveal in my new book, she worked side by side with the Organization of the Islamic Conference, the umbrella group where 57 majority Muslim states pushed their agenda of imposing Sharia law on the non-Muslim world, to use hate crime laws in the United States to criminalize speech critical of Islam, in accordance with United Nations Resolution 16/18.

Their first victim in the United States was a Coptic Christian named Nakoula Bassiley Nakoula, the maker of the YouTube video Hillary and Obama blamed for Benghazi.

When foreign donors had difficult in getting appointments with Mrs. Clinton through normal State Department channels, Clinton Foundation executive Douglas Band would email Huma Abedin, and poof! the doors would open as if by magic.

Donald Trump has criticized this as “pay for play.” But it also raises questions as to whether Huma Abedin and Mrs. Clinton were in fact serving as unregistered agents for foreign powers who sought to impose their anti-freedom agenda on the United States.

The United Arab Emirates, Saudi Arabia and Egypt outlawed the Muslim Brotherhood as a terrorist organization in 2014. But by then, the damage had been done.

Do Americans want eight years of a President Clinton, who will do even more to empower the Muslim Brotherhood and impose its agenda on America?

Timmerman is a Donald Trump supporter. He was the 2012 Republican Congressional nominee for MD-8 and is the author of Deception: The Making of the YouTube Video Hillary & Obama Blamed for Benghazi, published by Post Hill Press.