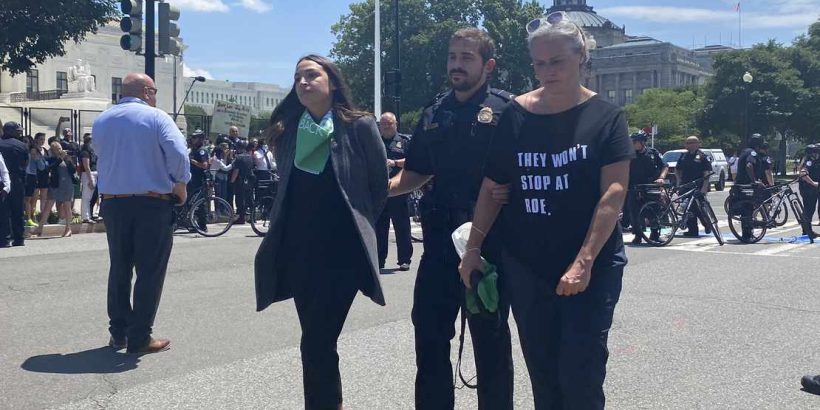 WASHINGTON (TND) — Rep. Alexandria Ocasio-Cortez was one of 16 members of Congress arrested by Capitol Police for blocking traffic during an abortion rights protest near the Supreme Court Tuesday.

Ocasio-Cortez, who is also known by her initials “AOC,” was escorted away from the protest holding her hands behind her back, drawing criticism from those who believed she was trying to appear as if she was handcuffed.

A video showing Ocasio-Cortez being escorted away from the protest by police was posted to Twitter by Douglas Blair from The Daily Signal. Many others quote-tweeted the video adding their own observations.

“Why was she pretending like she was handcuffed?” asked Elijah Schaffer from The Blaze.

“The fake handcuffs are everything,” said conservative strategist Natalie Johnson.

Judicial Watch President Tom Fitton asked if her arrest outside the Supreme Court made Ocasio-Cortez “a criminal insurrectionist who should be banned from federal office,” an apparent reference to allegations against several Republican lawmakers who have been accused of the same for their alleged involvement or promotion of the January 6 Capitol riot.

Senior Editor for The Federalist, Christopher Bedford, called Ocasio-Cortez’s actions “Civil Rights cosplay” in his quote tweet of the video.

Photos posted by Newsmax host Benny Johnson show Ocasio-Cortez raising her fist into the air while being escorted away, supposedly breaking the illusion of her pretending to be handcuffed. Johnson captioned the photos with the words “CLOWN WORLD LOL.”

Ocasio-Cortez, one of the most outspoken progressive Democratic lawmakers in America, has been extremely vocal about her support for abortion rights following the recent Supreme Court decision to overturn the longstanding Roe v. Wade decision, which had solidified access to abortion nationwide.

Tuesday’s protest outside the Supreme Court was reportedly a demonstration for the restoration and protection of abortion rights.

It remains unclear if Ocasio-Cortez’s hands were ever restrained while being escorted by police on Tuesday, but videos and photos of the event seemingly show that her hands were free at least some of the time.