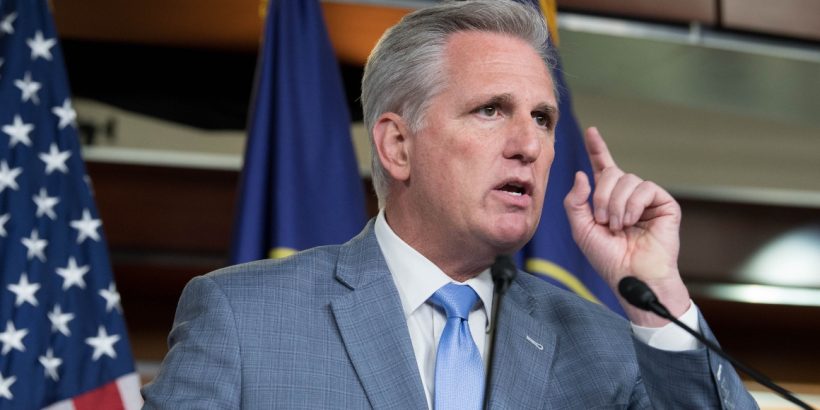 With an expected GOP takeover of the U.S. House of Representatives following November’s midterm elections, Republicans in the chamber are poised to launch a slew of investigations aimed at dialing up the pressure on the Biden administration over a range of issues—from border security to Hunter Biden to the origins of the pandemic.

House Republicans will take the administration to task on alleged “policy failures that have created an inflation crisis, energy crisis, border crisis, and crime crisis impacting every American family,” Stefanik told The Epoch Times in an emailed statement.

Big Tech’s censorship of conservative voices will also be scrutinized, she added.

On the foreign policy front, the Biden administration’s botched withdrawal from Afghanistan, the Chinese Communist Party’s influence in the United States and abroad, and U.S. strategy toward Iran are set to come under focus.

Republicans are already laying the groundwork to take on “an aggressive oversight role” next year by issuing preservation notices and document requests so a potential GOP majority “will be ready to hold the Biden administration accountable from day one,” a House GOP leadership aide told The Epoch Times in an email.

Many of the inquiries are expected to be spearheaded by the powerful House Committee on Oversight and Reform, the chamber’s main investigative panel that has broad authority to scrutinize various facets of the administration.

The committee’s ranking member James Comer (R-Ky.), who is poised to take the chair should the Republicans flip the House, foreshadowed an ambitious agenda by a GOP-led panel.

“[W]e will return the House Oversight and Reform Committee to its core mission of rooting out waste, fraud, abuse, and mismanagement in the federal government and holding the Executive Branch accountable,” Comer told The Epoch Times in an emailed statement.

Another committee member Rep. Michael Cloud (R-Texas) had a clear message for the Biden administration via email to The Epoch Times: “Their days of corruption, fraud, and abuse will no longer be met with blind eyes.”

Chief among a GOP-led House Oversight Committee’s priorities is an investigation into Hunter Biden and his foreign business dealings.

For more than two years, the president’s son has been at the center of growing controversy over his overseas business activities, including in Ukraine, Russia, and China, conducted while Biden was vice president in the Obama administration.

Hunter is currently the subject of a federal investigation being run out of Delaware and, according to a recent CNN report citing unnamed sources, it is “nearing a critical juncture.”

Hunter has previously denied wrongdoing, and the elder Biden has maintained that he has never discussed Hunter’s business activities with his son.

The president’s son’s extensive financial dealings with foreign individuals and businesses, raise concerns about conflicts of interests, illegal lobbying, and whether his ties influenced U.S. foreign policy during the Obama administration, critics say.

Republicans have honed in on Hunter’s work for Ukrainian gas firm Burisma, while his father was the Obama administration’s point-man on Ukraine, and Hunter’s dealings with several Chinese companies and businessmen with links to the Chinese Communist Party.

“We will continue to conduct oversight of Hunter Biden and the Biden Family’s pattern of peddling access to the highest levels of government to enrich themselves,” Comer said.

“They have racked up over 150 suspicious activity reports for their foreign business deals, which is a national security threat,” the lawmaker said, referring to a CBS report saying that U.S. banks had flagged more than 150 financial transactions involving Hunter or the president’s brother, James, for further review by the Treasury Department’s Financial Crimes Enforcement Network. Some of the transactions involved large wire transfers, the report said.

“We need to know if President Biden benefited financially from these deals and if he is beholden to the interests of foreign adversaries,” Comer said.

The ranking member highlighted that the committee would continue to investigate the origins of COVID-19, focusing on the possibility that the pandemic was the result of a leak from the Wuhan Institute of Virology (WIV) in China.

“Growing evidence shows COVID-19 likely originated from the Wuhan Lab and the Communist Party of China covered it up,” Comer said.

An array of circumstantial evidence has prompted some officials and scientists to point to the WIV as the most likely source of the pandemic. These include the WIV’s gain-of-function research on bat coronaviruses, reports that staff members became sick with symptoms consistent with both seasonal flu and COVID-19 in the fall of 2019, before the Chinese regime acknowledged the outbreak, and that a WIV public database of 22,000 samples and viral sequences was taken offline in September 2019 before the onset of the pandemic.

The Chinese regime’s persistent refusal to allow outside access to the lab and its data has made it nearly impossible to fully investigate the lab leak theory.

Domestically, the potential role of the National Institutes of Health (NIH) in aiding WIV’s activities has been viewed with particular alarm by Republicans, who are looking to intensify the inquiry. The NIH has previously funded WIV via New York-based health nonprofit EcoHealth, including one grant that amounted to what experts have described as gain-of-function research on bat coronaviruses.

“We will seek to hold U.S. government officials accountable for any wrongdoing, and ensure Americans’ tax dollars aren’t being used on risky research at unsecure labs,” Comer said.

The ongoing struggle by the administration to control the flow of illegal immigration at the U.S.–Mexico border is set to become another focal point for Republicans serving on the House Oversight Committee, and other panels.

“We will also continue our oversight of Biden’s border crisis that has led to historic illegal immigration, a surge of deadly drugs pouring across the border, and mismanagement of taxpayer dollars,” Comer said.

With a GOP-led House Energy and Commerce Committee, Biden’s energy policies amid a deepening global squeeze on oil and gas are expected to come under close scrutiny.

“We will build on our robust oversight over how the administration is censoring conservative speech, shutting down American energy and increasing gas prices, abusing its public health emergency powers, [and] colluding with political allies like teacher’s unions,” a spokesperson for Energy and Commerce Republicans told The Epoch Times in an email.

Meanwhile, a Republican-led House Financial Services Committee would focus on probing regulatory agencies’ alleged efforts to impose a “far-left agenda” on the U.S. financial system, as well as the Biden administration’s implementation of the $1.9 trillion COVID-19 stimulus package known as the American Rescue Plan, said Laura Peavey, communications director for the House Financial Services GOP, in an email to The Epoch Times.