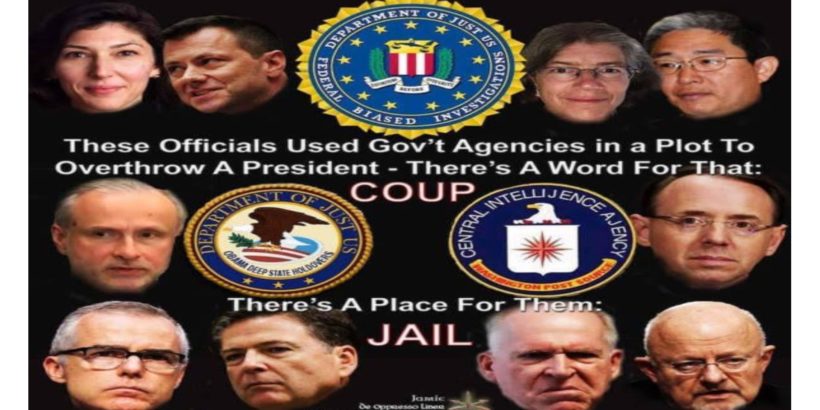 Fired Former FBI Director Andrew McCabe made the decision to put what is likely the infamous pee-pee garbage story from the dossier into reports that was shared with the press based on a directive from President Obama.

This fake and disgusting piece of information they all knew was false at that time was used anyway to support their spying on candidate and President Trump.

The FBI knew in January 2017 that the Trump-Russia dossier was a crap document.

Catherine Herridge released a page from the recent FISA report that shows that Andrew McCabe gave the directive to the FBI to include all the information from the Steele dossier in their Intel assessment per a directive from Obama:

This grotesque and now confirmed totally debunked piece of garbage known as  the dossier was then ‘leaked’ to the press before President Trump was even sworn in as President.

The BBC’s reporter Paul Wood wrote an article at the BBC on January 12, 2017, discussing the pee-pee garbage in the dossier and made it sound like it was legit and the President of the US was under the thumb of Russian President Putin.

The significance of these allegations is that, if true, the president-elect of the United States would be vulnerable to blackmail by the Russians.

I understand the CIA believes it is credible that the Kremlin has such kompromat – or compromising material – on the next US commander in chief. At the same time a joint taskforce, which includes the CIA and the FBI, has been investigating allegations that the Russians may have sent money to Mr Trump’s organisation or his election campaign.

Claims about a Russian blackmail tape were made in one of a series of reports written by a former British intelligence agent, understood to be Christopher Steele.

As a member of MI6, he had been posted to the UK’s embassy in Moscow and now runs a consultancy giving advice on doing business in Russia. He spoke to a number of his old contacts in the FSB, the successor to the KGB, paying some of them for information.

They told him that Mr Trump had been filmed with a group of prostitutes in the presidential suite of Moscow’s Ritz-Carlton hotel. I know this because the Washington political research company that commissioned his report showed it to me during the final week of the election campaign.

Wood was interviewed on January 12, 2017, a few days before President Trump’s inauguration.  In this interview he spewed the Democrat’s bogus talking points regarding the bogus dossier like a good MSM soldier.  In his interview he said:

…The President-elect of the United States is vulnerable to blackmail.  Imagine if that’s true.  There are already senior Republicans like John McCain talking about hearings.  There are Democrats, not just wishful thinking on their part, talking about impeachment…

Note that it was clear then that McCain was after President Trump and involved in the Russia collusion sham and the Democrats were talking about impeachment before the President was even sworn in.

Note also that the FISA report states that the “newer stuff” and  “potential compromising material” was to be added to the Intel report:

McCabe added this “potential compromising material” which was likely the pee-pee garbage tale into the intelligence community’s report based on Obama’s directive.

This all goes to the top.  Obama knew all that was going on.