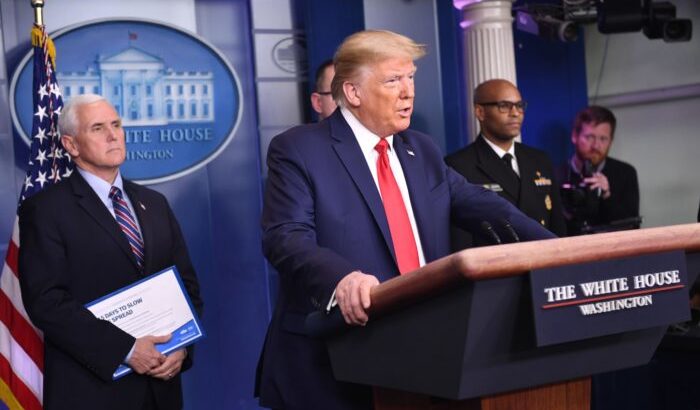 Photo:  President Donald Trump speaks during the daily briefing on the CCP virus, commonly known as the novel coronavirus, at the White House in Washington, on March 22, 2020. (Eric Baradat/AFP via Getty Images)

A public radio station that relies in part on federal funding is refusing to carry live press conference from the White House, a move that provoked widespread ire and calls of censorship.

President Donald Trump and the White House Coronavirus Task Force, which features the top medical experts in the country, have been giving daily briefings from Washington, disseminating updates from the response to the CCP virus.

Media outlets have been airing the briefings live but KUOW Public Radio, based in Seattle, said Tuesday it would no longer do so.

“KUOW is monitoring White House briefings for the latest news on the coronavirus—and we will continue to share all news relevant to Washington State with our listeners,” the station said in a statement.

“However, we will not be airing the briefings live due to a pattern of false or misleading information provided that cannot be fact checked in real time,” it added.

The station didn’t immediately respond to a request for further information on its decision.

KUOW is a member station of NPR, a nonprofit media organization that is funded in part by the federal government. According to NPR, its member stations get four percent of their funding from federal, state, and local governments.

NPR says that “federal funding is essential to public radio’s service to the American public” and that “elimination of federal funding would result in fewer programs, less journalism—especially local journalism—and eventually the loss of public radio stations, particularly in rural and economically distressed communities.”

The Seattle station says on its website that it opened a new broadcast center in Seattle in 1999, funding in part by tax-exempt bonds. It says that over 92 percent of its revenue comes from contributions from people, businesses, and corporations.

Most organizations have carried the press conferences, which can last for up to around two hours, live through the duration but on Monday NBC, CBS, CNN, and ABC switched to other programming before the briefing ended. White House deputy press secretary Judd Deere called what happened “pretty disgraceful” and thanked Fox News, which aired the briefing in its entirety.

Broadcasters indicated similar situations may arise in the future.

“If the White House wants to ask for time on the network, they should make an official request. Otherwise we will make our own editorial decisions,” CNN said in a statement.

KUOW has published a number of “fact checks” on its website written by NPR reporters, including ones examining Trump’s comparisons between the new illness and the flu and Trump comparing the Defense Production Act to nationalization.

Fact checks are pieces examining claims and statements, often made by government officials.

One piece looked at Trump’s response to a reporter who asked whether the president shares a prognosis by the Surgeon General, who said this week “is going to get bad.”

“Of course I do. It’s going be bad, and we have a lot of people dying from the flu, as you know. We have a very bad flu season on top of everything else. It’s very bad. It looks like it could be over 50,000. And certainly this is going to be bad, and we’re trying to make it so that it’s much, much less bad. And that’s what we’re doing,” Trump responded.

The author of NPR’s article shared statistics from the Centers for Disease Control and Prevention that estimates there have been 23,000 deaths from the flu during the current flu season.

“While flu can send hundreds of thousands of people to the hospital each year, the seasonal effect is reasonably well understood and planned for. The comparison between flu and COVID-19 doesn’t capture the strain that the new coronavirus is putting on hospitals. COVID-19 is a new disease that is hard to predict,” the author wrote.

“And the surge in cases requiring intensive care that was seen in China and now in Italy can lead to a health system’s collapse.”

Bonnie Nirgude’  committed to accurately reporting the news. Wide awake, never asleep, I grew up in a 1960’s patriotic household, aware of the truth behind the false narrative.