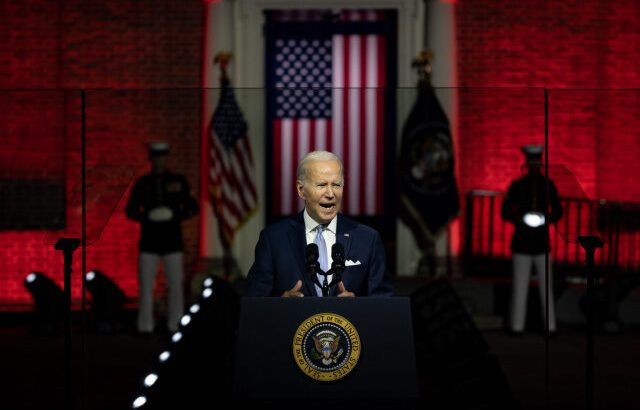 President Joe Biden called on Americans to “stop” MAGA Republicans, whom he consistently cast as a dark force against democracy in his “Soul of the Nation” prime-time speech on Thursday.

While much of the president’s dark and brooding speech focused on demonizing MAGA Republicans, one particular moment took the demonization a step further when the president appeared to suggest that Americans take up the mantle of isolating Trump supporters.

The president said this after portraying MAGA Republicans as direct threats to American democracy.

“MAGA forces are determined to take this country backwards,” he added. “Backwards to an America where there is no right to choose. No right to privacy. No right to contraception. No right to marry who you love. They promote authoritarian leaders and they fan the flames of political violence.”

Later, the president encouraged Americans to fight against this dark and wicked ideology, characterizing MAGA Republicans as a minority, even though 70 million people voted for Donald Trump.

“And folks, it’s within our power, within OUR HANDS, yours and mine, to stop the assault on democracy,” he continued. “I believe America is at an inflection point. One of those moments that determines the shape of everything that is to come after. And now, America must choose, to move forward or move backwards. To build a future or obsess about the past. To be a nation of hope and unity and optimism, or a nation of fear, division, and darkness.”