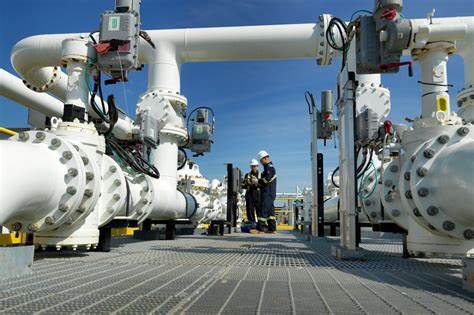 The company behind the Keystone XL pipeline said it will not be restarting the pipeline after both Canadian and American elected officials called for the project’s revival amid soaring oil and gas prices.

The Biden administration Tuesday banned Russian oil imports over the conflict in Ukraine as the average price for a gallon of gasoline soared to a record high of over $4 nationwide.

“The Keystone XL Pipeline Project was terminated and will not proceed,” a TC Energy spokesperson told several news outlets on Tuesday.

Although the pipeline would have transported some 830,000 barrels of oil from Alberta, Canada, to the U.S. interior, the project ran into regulatory hurdles before President Joe Biden in early 2021 signed an executive order to suspend its construction.

When asked Wednesday about restarting the Keystone XL pipeline, White House press secretary Jen Psaki told reporters that ‘”there’s [sic] no plans for that, and it would not address any of the problems we’re having currently.”

“Keystone is a pipeline, it’s not an oil field. It doesn’t produce additional oil … Even if we drilled as much as we could, the price of oil is still set globally by the demand and supply conditions,” he said.

On Tuesday and Wednesday, some Republican lawmakers and Alberta Premier Jason Kenney called on the White House to restore the project, saying it would alleviate some Americans’ pain at the pump.

Biden, Transportation Secretary Pete Buttigieg, and Psaki are resistant to restarting the pipeline or allowing for new drilling, and instead, they’ve pushed for investing in electric vehicles, although critics have noted that the cost for such vehicles is prohibitory for many Americans.

“This crisis is a stark reminder [that] to protect our economy over the long term, we have to become energy independent,” Biden said Tuesday. “Loosening environmental regulations or pulling back clean energy investment won’t lower energy prices for families,” he added, without elaborating.

Buttigieg drew sharp criticism online this week after saying that Americans stand to benefit from having more electric vehicles on the road. However, he did not elaborate on how they could become more affordable.

Americans “rural to suburban to urban communities can all benefit from the gas savings of driving an EV,” he said. The average price for an electric vehicle was around $56,000 as of December 2021.

According to automotive group AAA, the average cost for a gallon of regular gasoline stands at just over $4.25, jumping 25 cents in just three days. In California, which has the nation’s highest prices, a gallon costs $5.57.

After the ban on Russian oil was announced, Republicans, meanwhile, called on the White House to ramp up domestic production.

“The challenge is that President Biden still won’t say ‘yes’ to American energy because to replace that Russian oil is the real critical step,” House Minority Whip Steve Scalise (R-La.) told the Wall Street Journal. “The answer is right below our feet.”