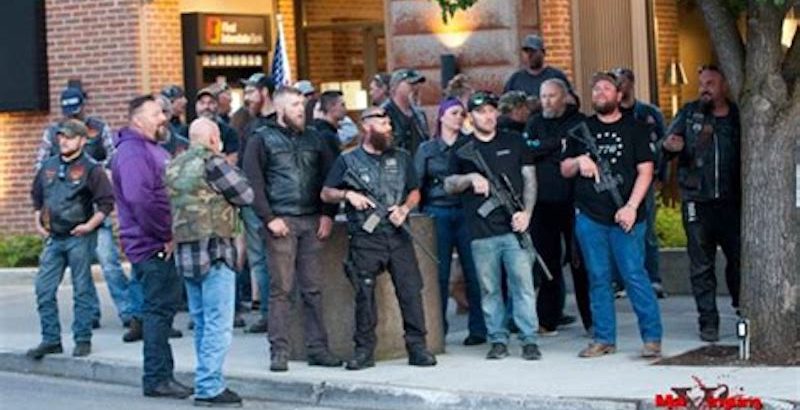 Our U.S. Constitution Is Our Right, Not For Sale 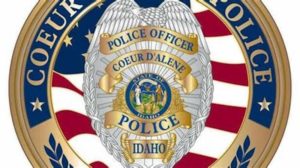 While this article is a few weeks old, the story is relevant to today. In early June, Antifa, a declared terrorist organization by the Trump Administration, infiltrated a peaceful protest in downtown Spokane, WA. Pallets of bricks happened to be placed throughout the city even though no new construction projects were in sight.

Looters, vandals and rioters destroyed many businesses including an Apple Store, the Nike store and a bank. Thousands of dollars were assessed in damages. Coeur d’ Alene, ID locals were made aware Antifa was on the move.

Coeur d’ Alene, ID is a prized city in the Inland Northwest by locals. 25 miles east of Spokane, it is captured in an enticing mountain setting, and has one of the largest and most beautiful lakes in all of the Pacific Northwest.

Open-carry is a powerful deterrent! Thousands stood up to Antifa and like a dog with it’s tail between it’s legs, Antifa high-tailed it out of there, seeking another city they could bully.

Social Media claimed the same thing happened in Summerlin, Nevada. Antifa told these residents on May 31, 2020, they were coming into their neighborhoods and would wreak havoc. Police officers and armed citizens showed them otherwise. When Antifa realized they would be met with armed danger, they moved on.

The common theme in these two article is we value our police officers. We need police protection. We embrace our 2nd Amendment right to protect ourselves, our families and our property.

Our Constitution is not up for grabs.  To make sure of this, we must vote officials into office who embrace safety, support law enforcement, support our Constitution, and expect law and order to be carried out when it comes to thugs like Antifa.

After all, an elected official who does not embrace law and order in our country, appears to just be an older version of Antifa.

Men with semi-automatic weapons, handguns say they are here to protect city amid reports of militants heading this way

COEUR d’ALENE — Reports and rumors that groups bent on rioting and violence in Coeur d’Alene brought out men and women with guns on Monday determined to stop them if they arrive.

Dan Carson was patrolling Sherman Avenue with an AR-12 semi-automatic 12-gauge across his chest, an AR-15 strapped to his back, two 9mm handguns holstered and a .38 special, too.

“I heard there are some people on the way who shouldn’t be here,” he said early Monday evening.

Those people, he said, were Antifa and Proud Boys, militant far-left and far-right groups.

Carson said he was in Spokane Sunday night helping protect business there. He said he supports the right to protest and is also upset about the death of George Floyd.

“By all means. I’m on their side. I disagree with what happened,” he said. “What I don’t agree with is when you turn to violence, and you start rioting and destroying businesses and hurting people who have nothing to do with anything.

“That’s what I’m here to hopefully prevent,” he said, adding, “I’m not going to be alone. There’s a lot more on the way.”

He was right. Soon, more armed men, self-described as a loosely formed group of patriots, arrived. They took up posts at corners on both sides of Sherman Avenue.

Later, they were joined by hundreds of citizens packing rifles, semi-automatic weapons, handguns, and bows and arrows.

The sidewalks were packed with people walking up and down Sherman Avenue, firearms proudly displayed for all to see.

They carried guns, had them holstered around their hips and had them strapped across their backs.

It was literally a call to arms — and people responded. Armed citizens proudly turned up with guns and American flags. They sent a clear message: North Idaho will protect its own.

Arick said they were also there to observe and act as a deterrent to any potential trouble.

“To show that you don’t throw cinder blocks through a bar window,” Austin said.

A few businesses had windows boarded up.

Four friends stood in front of All Things Irish holding an American flag.

“To support Americans and police that are protecting us,” said Hunter Williams when asked why they were there.

None of them had firearms.

Christy Robinson, holding a sign that read, “Black Lives Matter,” said “Many of the people I love are people of color. They’re part of my family, they’re part of my life and they’re in my heart.”

She said she understands why people are upset — and can feel their pain — about the racial injustice that continues to go on in America.

“It’s making me angrier and angrier,” Robinson said. “Instead of a horrible outlet like burning things or destroying them, I’m trying to have a positive outlet and just get my message out there.”

One woman holding a sign and wearing a mask declined to give her name.

“Everyone is equal in this world,” she said. “If people aren’t going to accept that, then we’re going to make it happen.”

Mylieanna Agee, who recently moved to Coeur d’Alene, said their goal was to create awareness of police brutality that’s going on in the world.

All lives matter, she said.

Her group had no desire to start trouble, Agee said.

“We’re just trying to keep it peaceful,” she said.

Earlier, in the WinCo parking lot, a group of about 40 men and women, some carrying semi-automatic weapons and handguns, stood watch due to what they said were threats of left-wing militant groups coming to start riots at the store.

“We came here as a show of force and as a deterrent to prevent that from happening,” said Trevor Treller, who had an AR-15 and a Glock 19 handgun. “Nobody here wants a confrontation and everyone here is wiling to engage in one if it ever should it come to that, or need to be. But nobody wants it and everyone prays it will never happen.”

Treller said they had been there for a few hours and nothing much had happened, expect some people “clad head to toe in black” drove by and shouted obscenities at them.

“They left. It’s quite possible they left because we’re here,” he said.

Treller described the group he was with as “a loosely joined group of patriots who love our state, love the city of Coeur d’Alene and won’t tolerate seeing any violence being perpetrated against it.”

“We just want to make sure nothing violent or nothing criminal happens in our city,” he said.

Like Carson, he said he had heard reports, verified by people in positions who would know, that people with Antifa were being bussed in “for the purposes of causing trouble and rioting.”

He noted that Spokane, where there were riots and looting late Sunday, is only 35 miles away.

“It’s not inconceivable that some very foolhardy, idiotic people in Spokane who are of a mind to commit violence would think they could get away with trying it here,” Treller said. “We’re here to tell them different.”

“We’re just here to minister to people in case it starts getting heated,” he said. “We don’t want anybody getting hurt.”

Police arrived and told the group they had to leave the WinCo parking lot, as it was private property, so they went to Appleway, across the street from those holding Black Lives Matter signs. The two sides later reportedly came together.

As he walked away, a man who said his name was Rescue said he was there to make sure “everybody has a chance to speak their mind but not get out of control.”

Rescue carried an AR-15 and two .40-caliber handguns. He said he and his counterparts were prepared if trouble came to Coeur d’Alene.

“We have people all over town,” Rescue said. “The rumors are, they’re going to be in numerous places and they had a scout in here earlier counting our numbers and reporting to somebody.”

Brett Surplus of Coeur d’Alene, a former police officer, said he was there to defend people’s businesses and protect people’s right to free speech.

He said a show of force by armed citizens may prevent problems.

“We sit back long enough and see America not help their blue line because of the fear factor or they’re not armed,” he said. “This is where the end of the line stops in this state.”

Surplus said he is a hunter and fisherman and loves Idaho.

“I want to protect our way of life,” he said.

This story has been updated after it appeared in print to reflect that the weapons present were semi-automatic.