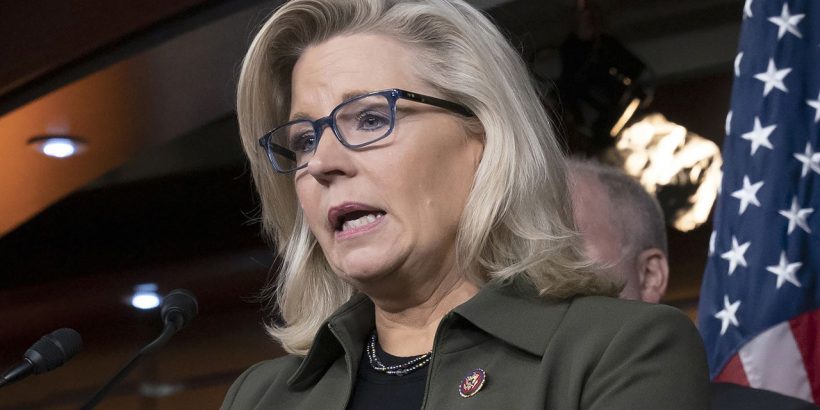 If the polls in Wyoming are correct, GOP Rep. Liz Cheney’s days in Congress are numbered.

After coming out strong against then-President Donald Trump following the Capitol riot that he has been widely blamed for — and then agreeing to co-chair what is widely viewed by members of her party as a highly partisan committed ostensibly to ‘investigate’ the incident — Cheney’s approval rating tanked in her state, where 70 percent of residents voted to reelect him in 2020.

She is trailing badly behind Harriet Hageman, a Wyoming attorney and GOP activist whose Republican primary candidacy was backed very early by Trump last fall shortly after she announced she would challenge Cheney.

So, if Hageman wins next month’s primary, Cheney will be back home in Wyoming by early January 2023. What will she do with all of her time?

Possibly mount a 2024 GOP presidential campaign, according to her own suggestion.

Rep. Liz Cheney (R-WY) did not rule out running for president in 2024 when asked about it on Sunday.

The question came up during an interview with CNN’s Jake Tapper on State of the Union that largely focused on the Jan. 6 committee’s work. Toward the end of the conversation, Tapper asked Cheney if she would consider running for president in order to stop former President Donald Trump from regaining the position.

Hageman went to battle with Cheney earlier this in Casper, Wyoming, and the sparks reportedly flew.

Cheney came under fire from her four primary challengers over her criticism of Trump and her work on the select committee probing the Jan. 6, 2021, riot at the U.S. Capitol.

At one point Hageman was assailed by Cheney over the results of the 2020 election, but the longtime GOP activist stood her ground.

Cheney, meanwhile, came under fire from her four primary challengers over her criticism of Trump and her work on the select committee probing the Jan. 6, 2021, riot at the U.S. Capitol.

“Cheney noted that Hageman’s political adviser Bill Stepien, who previously worked on the Trump campaign, testified before the panel investigating the riot that he doesn’t believe there was widespread fraud,” the Washington Examiner reported.

“I’d be interested to know whether or not my opponent, Ms. Hageman, is willing to say here tonight that the election was not stolen. She knows it wasn’t stolen. I think that she can’t say that it wasn’t stolen because she’s completely beholden to Donald Trump,” Cheney said.

“And if she says it wasn’t stolen, he will not support her. So, we’ve got to be honest, we have to be truthful — elected officials, in particular public servants, owe that to those people we represent,” Cheney added.

Hageman fired back and defended the former president while also pointing to a number of allegations surrounding the last presidential election and questions raised by various presentations and documentaries.

“We’re not a democracy — we’re a republic. Our republic is not in danger because of President Donald J. Trump. … The biggest threat to our republic is the current administration and the corruption of our institutions,” she said.

“The press and certain people have obsessed over Jan. 6. Over 30,000 miles of campaign travel through Wyoming, the only time that the J6 situation ever comes up is when people talk about how unfair this entire committee is,” Hageman added. “They’re focusing on something that happened 18 months ago. They’re not focusing on the issues that are important to the people in Wyoming.”

A late June poll had Cheney trailing Hageman by double digits less than two months before the Wyoming GOP primary.

“Ahead of the August primary, polling on the race remains limited, but one survey released last week found Cheney trailing her top opponent Hageman by 28 points,” Newsweek reported.